Most Republicans Believe In Climate Change 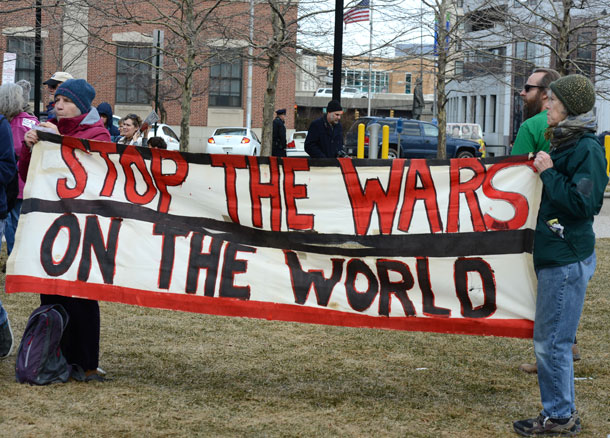 Recent polls show that more Americans believe in climate change than ever, regardless of their party affiliations. (Photo: Stephen Melkisethian, Flickr, CC BY-NC-ND 2.0)

A recent poll from Monmouth University shows that nearly 80% of Americans believe that the planet’s climate is changing, including a majority of Republicans. But only a third of Americans believe climate change requires immediate action. Director of Monmouth University’s Urban Coast Institute, Tony MacDonald joins Host Steve Curwood to break down the numbers and discuss how Americans are changing their thinking about climate change.

CURWOOD: A majority of Republicans have now joined a majority of Democrats and Independents to say they are concerned about climate change, according to the Monmouth University Polling Institute. More than 800 US adults were polled amid the news of the California wildfires. But while nearly 80% of those surveyed say they believe in climate change, only about a third feel immediate action is needed to meet the growing climate crisis. Tony MacDonald is the director of Monmouth University’s Urban Coast Institute, and he joins us now.

MACDONALD: Thank you very much for inviting me.

CURWOOD: So, what's the major takeaway of this study?

MACDONALD: I think the one is that we really saw a huge jump in the last three years in the number of people who believe in climate change. And that was bipartisan. There was over a 15 percent increase in the number of Republicans from 49 to 64 percent. So overall, 78 percent believe in climate change. And increasingly, we are seeing that this is not as often reported as just a Republican or Democratic issue.

CURWOOD: There is a tilt though that remains, that independents are more likely than Republicans to believe in climate change and Democrats even more so. But still, a majority of people you say?

MACDONALD: Yeah, I think the tilt starts to come out and be a little bit pronounced when you think about how serious it is. So again, we are seeing some increases in the amount of people who think that it is a serious problem. So, again, 54 percent think it's a very serious problem, up from 41 percent three years ago. But you do see that essentially the Democrats, 82 percent think it's very serious, where only 25 percent of the Republicans do. So, I think where you start to see the breakdown is that the need to take action right now, how serious it is, and that is still a fairly big gap.

CURWOOD: And what about this notion of “believing in climate change”? Because, you know, a number of folks out there say, Well, yeah, there's climate change, because the climate always changes on the planet, and humans don't have that much to do with it. 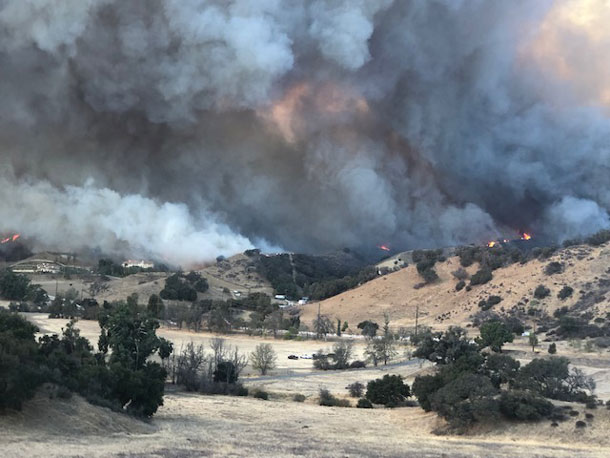 Monmouth University’s polling overlapped partially with the Woolsey and Camp wildfires in California – two natural disasters that are part of a pattern of more severe fire seasons in the West. (Photo: National Park Service, Flickr, CC BY 2.0)

MACDONALD: That's a good observation because our polls showed that actually, there was a split on what the causes were. So 37 percent, a plurality, still believe that it is essentially human and environmental caused, and so they don't single out the human contribution to it. And only 29 percent believe that it's primarily caused by humans. So again, there's still a lot of disconnect, that I think obviously leads to a concern that if you don't believe that humans are the problem, then you might not necessarily think that action is needed to change human behavior. So, I do think it starts to split apart again, and when you look at the need for action, and when to take action.

CURWOOD: So, what does your data tell us about the outlook of Americans when it does come to climate change across the board? How worried are they? How optimistic are they, do you think?

MACDONALD: Well, interestingly enough, there is some optimism that there is still time to take action in general. But what you do have is that 31 percent think it has to happen in the next two years. But over 46 percent believe it doesn't have to happen for 10 or 15 years. So, although there's optimism, it might be the sort of hopeful optimism that maybe the problem will go away, it will be something we can deal with another day. Again, I think there's no really broad consensus of a need to take immediate action. There was an interesting finding, as well, however, that the majority of Americans did think that government could take more action. So, it would be appropriate for the government to take action. But that is kind of undercut by the other finding that says that very few people have any confidence in Congress to take action.

CURWOOD: Now, studies show that registered voters who rank environmental issues as their number one or number two issue tend to be young, African-American, Latino, live in urban areas, many of them also make under $50,000 a year. What did you see in the demographic breakdowns of your study?

MACDONALD: We didn't go to that level of detail, Steve. But we did find that in fact, more young people did think that climate change was a very serious issue, and they saw a need to take action sooner. And they also were, as young people tend to be, a little more optimistic about the ability to respond. So, we did sort of verify, I think, your general sense that the younger folks are more interested in it. But it does seem that, you know, Hispanics, Blacks, 74 percent think that it is a very serious problem. But I mean, they might just feel more vulnerable in general to the impacts. I mean, there's many minority communities who are in coastal urban areas and cities that might feel more at risk, they might feel also that they have less ability to respond. I mean, you read a lot right now about after storms in the ability to rebuild and if you don't have insurance or are not self insured - so again, this is speculation - that I think they would probably feel more vulnerable to not only the physical impacts, but also the dislocation of jobs and homes. That could be some of the reason that you see a higher concern in the Hispanic and Black communities. 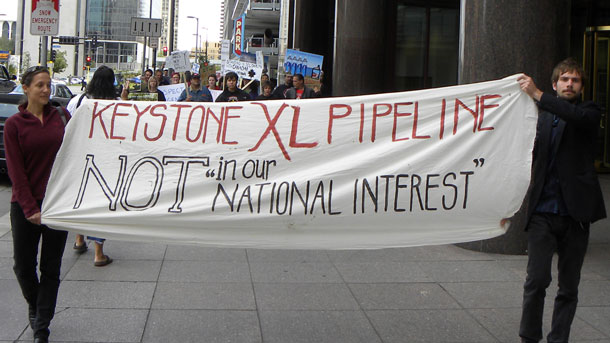 Polling data shows that younger generations are more likely to think the environment is a serious issue, but are also more likely to be optimistic about our ability to enact change that can help protect our planet. (Photo: Fibonacci Blue, Flickr, CC BY 2.0)

CURWOOD: Tony, how do you feel when you look at these results? How expected were they?

MACDONALD: I think they were not expected in terms of the degree of a shift in the direction of climate being a significant issue and one that needed action. And I think it's a fairly significant shift. We don't see that shift that often. I would say, however, I'm still concerned that maybe the motivations are going to be still political and economic in the end, and in the costs of responding. And there's still some significant disconnect between communities in terms of the need to take action quickly. And so, there's still a huge disconnect between the seriousness of the problem, which I think most scientists agree is now and the need to take action, which, still, most of the respondents think doesn't have to happen for 10 or 15 years.

CURWOOD: We recently talked to folks from what's called the Environmental Voter Project who had surveyed some 20 million registered voters who say they list the environment as their number one or two concern. And in 2014, only a little more than 4 million of those people bothered to show up at the polls. Twice as many showed up at the polls at this last midterm election, closer to 8 million. Given the trends that you see in concerns in these kinds of voter polls, where do you think we might be headed in terms of getting more action on dealing with the climate?

MACDONALD: Well, I think there's a couple of things. One is I think sometimes in the US, I think association with the environment can be perceived as something really that's simply about nature, not as an aspect of the environment. So, I think traditionally, environment has ranked low in past years, it's starting to come up again, which we haven't seen in a long time. But I do think environment’s been perceived as protecting nature. I think the climate issue is such a more complex one, that it really is about protecting societies and social fabric. 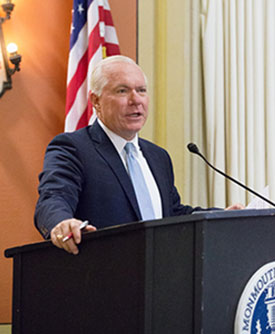 So, I do think you see political movements and politicians that are making connections between the environment and everything from social justice, to religion, to social elements to responsible business. I do think it's a very positive thing and I think you really are starting to see a real kind of a recipe for change.

CURWOOD: Which of your results concern you, Tony?

MACDONALD: I do think that lack of sense of immediacy is the thing that concerns me most. So, they may be long-term problems, and they may be investment over a long period of time. But if we don't start now, I do think we may get behind the 8-ball in significant ways. So I would say my most active concern is the lack of immediacy.

CURWOOD: We’ve pretty much known about this climate disruption for a quarter century now, had a United Nations treaty to deal with it; every year, there are reports that are saying it's getting worse and worse. And yet, we seem to think it's something that we can deal with in the future, the majority of us do.

MACDONALD: Yeah, I have seen how, particularly in the international fora, it takes a long time to reach a consensus, although the US is backing off from Paris. It was a long time to reach the kind of consensus about the need for dramatic action. So, I do think those legal processes can move slow. But I think that the real conflict here is that it is a long-term problem. So, the real effects aren't going to be felt for a long time. We can defend for a while. We can live the way we currently do for a while. There will be a lot of casualties along the way. But again, the reality is we're building a wall that's going to collapse eventually. So, I think it's the disconnect between the length of the commitment it's going to take to solve this problem and the need for immediate action. So, I think people are afraid about, our lives are going to change and we are much more able to do that after something significant happens. You know, we all don't worry about our health until something goes wrong, and then we might radically change the way we perceive ourselves. And so, I do think that's just an unfortunate reality, that this is a complex and long-term problem that does defy short-term quick fixes.

CURWOOD: Tony MacDonald is the Director of Monmouth University's Urban Coast Institute. Thanks for taking the time with us today.

MACDONALD: Thank you. It was good talking with you.