Creating The Earth And Moon 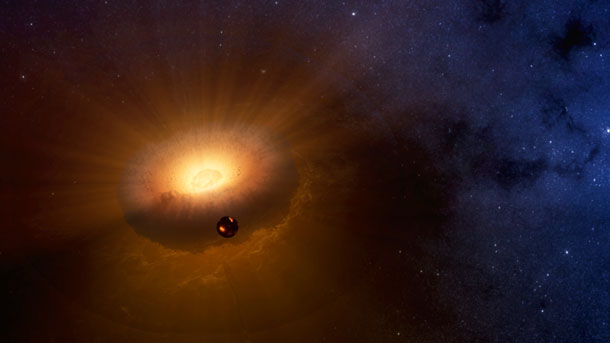 An artists’ rendering shows how the Earth and Moon formed from the vaporized rocks of a synestia. (Photo: Sarah Stewart/ UC Davis based on NASA rendering, courtesy of UC Davis)

University of California, Davis Professor Sarah Stewart, one of 2018’s MacArthur Fellows, is a planetary scientist trying to understand the origins of the Earth and Moon. She theorizes that the Moon and the present Earth actually came from the same vaporized cloud of rock from a gigantic celestial collision, which she calls a synestia. Prof. Stewart spoke with Host Steve Curwood about her research and about pursuing her early dream of becoming a scientist.

The tremendous force of a collision in space can create as well as destroy planets. And in an attempt to understand how the Earth, and our nearest neighbor, the Moon, were created, scientists including Sarah Stewart use the next best thing to planetary collisions: a gun. Sarah Stewart is a Planetary Scientist at the University of California, Davis and a recipient of one of this year’s MacArthur Fellowships. Sarah Stewart, welcome to Living on Earth.

STEWART: Thank you very much.

CURWOOD: Putting the cards on the table, Sarah, there are not a lot of women who are scientists, senior scientists these days; not a lot of astrophysicists. What got you into science?

STEWART: As a child, I read a lot of science fiction. I watched Star Trek with my father and it seemed real, right? It wasn't something that was impossible to conceive, that I could do these things too. And I had a fantastic high school physics teacher who really got me hooked, and I credit him, Eric Curry, at O'Fallon Township High School for really nurturing my interest in science. So I went to college thinking I would be a physicist. And so I think that alone is unusual in that there was nothing around me that said, this was an odd thing that I wanted to do.

CURWOOD: So, who was your favorite character on Star Trek?

STEWART: Oh, well, of course, Spock [LAUGHING] because, you know there's something attractive about analysis, about breaking things down, and trying to figure out how it works. And even though he had other extreme personality traits, that process was very interesting.

CURWOOD: So, the MacArthur people became fascinated with you, in no small measure, because you've been looking at the question of this thing we call the Moon – how did we get it, and how's it related to us? What about this area of study drives you?

STEWART: I think there's an inherent curiosity to where we came from, and how the Earth came to be the planet that's so different from our neighbors. And even though that's a general question that people are interested in, what we have today are comparisons -- we have exoplanets that tell us that our system is not the most common in the universe, and that Earths are not common in the universe. And so, I basically have been trying figure out why, what is it about the way the Earth grew, that was different. And our nearest neighbor, our partner in space, the Moon, is a key part of that story, because it set the ending of Earth's growth and the beginning of our climate in ways that did not occur on the planets next to us.

CURWOOD: So, what got you first interested in this question of where the heck did the Moon come from?

STEWART: So, in trying to understand the general problem of planet formation, I learned that collisions were a key part of the process. And I didn't know that I was going to do that as part of planet formation. I thought I was going to be an astronomer. But when I went to graduate school, there was a professor, Tom Errands, who had a gun lab - literally cannons in the basement of the building - and he could do these impact experiments that mimicked planet formation. And I did a first year project with him, and I was hooked.

CURWOOD: So, there you are, you're in the airplane and person next to you says, “So, what do you do?” What's your 30 second speech to them about what it is that you do and what you've discovered?

STEWART: I study how planets form and evolve. I combine lab experiments that recreate planetary collisions with computer models to answer questions that we see in the solar system.

CURWOOD: And what have you discovered so far?

STEWART: What we've learned is that a giant impact transforms the Earth into a new planetary object. And we call it a new object because it's no longer a planet. It's not a planet with a disk orbiting around it like the rings of Saturn. We make an object that we named a synestia. A synestia is a vaporized planet spinning rapidly that looks kind of like a giant space donut and within that vapor of the synestia, we propose that the moon grows. And because the moon is growing inside the vaporized rock of the Earth, the moon inherits the chemical signature of the Earth. And that explains the unusual similarity between the Earth and the Moon.

CURWOOD: So our mantel, which in some respects is kind of like a coat, or something, or coating around this core, and the moon itself, made of the same cloth, if you would say, and it all came out of this swirling sort of donut thing, from this synthesia form that you call it, and that's how we're related. How the heck did you figure that out?

STEWART: We run computer models, but there's a human step of needing to interpret what comes out of these models. And it turns out that scientists have probably been making synestias in their computers for a long time before realizing what they had. And that's partly because we make assumptions when we analyze the data. And one day my student, Simon Locke, and I were sitting in front of the computer making plots that we had never made before. Meaning, rather than making assumptions, we just said, what does it look like raw? And what does that mean for what comes next. And we convinced ourselves that what we had been assuming about what comes next was absolutely wrong, and that we had something completely different. And so, that was our big moment.

CURWOOD: Now, how does this differ from the other hypotheses out there about how the moon was formed?

STEWART: So, the giant impact model rose out of the Apollo mission 50 years ago almost, or the first rocks from the moon. And they disproved every previous model of lunar origin that was in the literature. And the giant impact hypothesis basically constrained the total mass of the moon, the fact that the moon has a small iron core. And when computer simulations were run with a giant impact model that satisfied those constraints, the moon was made primarily out of the object that hit us. But because no two objects in the solar system are identical, it did not explain the chemical observations that we had. And this has been a problem the whole time that we've had the giant Impact Theory. And people have proposed different Band-Aid solutions of how to try and get around this problem. But we were at the point where the whole idea of the giant Impact Theory was about to be thrown out because we did not have a reconciliation of the physics and the chemistry. 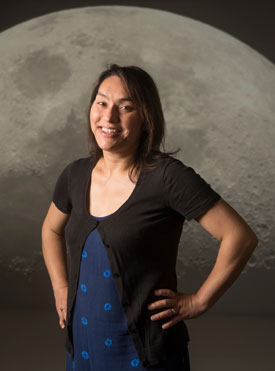 Sarah Stewart is a planetary scientist and one of 2018’s Macarthur Fellows. (Photo: Courtesy of UC Davis)

CURWOOD: And then you...can you call it a tweak, what you did?

STEWART: So, I say, we still have a giant impact origin for the moon. But we changed everything else about it, except the name. [LAUGHS] It is a variation, it's higher energy, higher spin. And the reason why those two things are important is that's what makes the synestia, and the moon forming in a synestia is a different environment than the moon forming in the old giant impact models. The moon forming in the old giant impact models was primarily a debris disc derived from the impactor and the moon didn't have a direct connection with the Earth, not the same way that there is a genetic relationship between the Earth and the Moon within a synestia.

CURWOOD: Why is it important for us to know all of this?

CURWOOD: And the answer?

STEWART: It's hard. [LAUGHS] It's hard to do. So, this is work in progress. Understanding how the vaporized planet cools is another exercise in stretching our imagination. For example, in the synestia, the Earth has no surface. There's no magma ocean to float a boat on. Instead, what we have is continuous vapor up to a high pressure liquid with no boundary. Temporarily, the Earth is more like a giant planet like Jupiter, which also has no liquid surface. And so even that starting point and thinking about the moon is something that we have to now invent techniques to attack and understand that we didn't need before.

CURWOOD: Sarah Stewart, what advice do you have today, particularly for young women who might be looking at science?

STEWART: My advice for young women interested in science is to go for it. If you love it, don't let anything around you beat out your love of science. And a way to be successful is to accept that everybody needs help and to ask for help. It is possible to live your life the way you want to and have a career in science. And the trick is finding what works for you.

CURWOOD: Sarah Stewart is an astrophysicist and a professor at the University of California, Davis, and one of this year's MacArthur fellows. Thank you so much for taking the time with us today.

STEWART: Thank you very much, Steve.