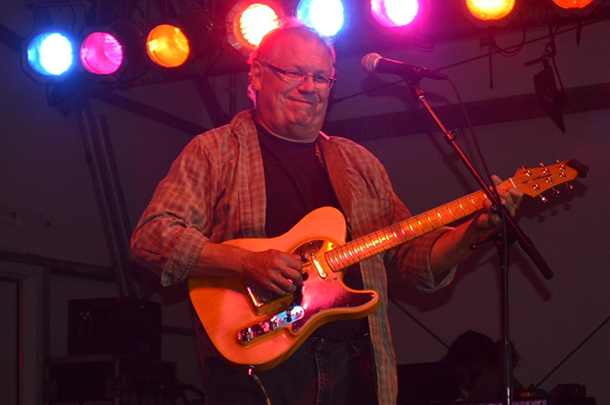 Denny Breau, a singer/songwriter from Maine, joins host Steve Curwood during these cold winter months to discuss some of the moments that warm his heart. He shares stories about one of his favorite holiday meals, ice-fishing, his Acadian family origins, and traditions of song that span the generations.

CURWOOD: It's the Living on Earth solstice and holiday season show. I'm Steve Curwood. We head now to the frozen north of Maine to join singer, songwriter and raconteur Denny Breau from Lewiston, Maine. So Denny, coming home for the holidays means of course getting something to eat. I’m sure you’ve got something for us along those lines.

BREAU: I sure do. It’s a song I wrote about my favorite dish in the whole world, not synonymous with holidays, but still my very best favorite.

Now there’s this little thing I’ve been addicted to.
So many times, I’ve said we’re through.
But I just keep on walking right back to you.
‘Cuz one helping’s so good, I think I’ll have two.
God only knows how much I love to eat
Been simmered for hours, chuck roast meat.
Bang for the buck, just can’t be beat.
And if you’ve got anything left, you make a fricassee.
Oh, pot roast
So bovine
Pot roast
Talk about dinner on a dime.
Pot roast
With a little red wine.
Some mashed with gravy’s gonna blow your mind
I said pot roast.
For all your guests.
Pot roast, baby.
Hell, why not feed ‘em the best?
Pot roast – I’m feeling blessed.
‘Cuz if you think you’re through – I could
Finish the rest of your pot roast.
Mmm, boy that sure is good honey.
You’re not gonna throw that away, now, are you? I’ll eat that.

Makes no difference whether you’re black or white;
Protestant, Catholic, left or right;
We got this one thing in common,
You know we all love the kids and the wife but it’s that
Crock pot that’s callin’ me home tonight.
So you can keep your turkeys, your chickens and your ham
And your cranberry stuffing with those candied yams
‘cuz when that next holiday comes rollin’ round baby
for me it all comes down to pot roast
so bovine
pot roast
talkin’ about dinner on a dime
pot roast
I like mine with a little red wine
Some mashed with gravy, gonna blow your mind.
Pot roast
for all your guests
Pot roast
Why not feed ‘em the best?
Pot roast
I’m feeling blessed.
And if you think you’re through – I could
Finish the rest of your pot roast.
Mmm, baby
That sure is good, honey.
Any more gravy?
Mmm-mmm.
Who made that, anyway?
Well, I did.
Mm-mmm.

CURWOOD: Wow! That's amazing. You're making me so hungry, Denny.

BREAU: Not at all. That's the whole point.

BREAU: I grew up in Lewiston, Maine.

CURWOOD: Mainers... when you go home there's, yeah, the place where you live and then there is camp.

BREAU: Oh, yeah. Camp is a very important thing, and we’ve been going to this one particular camp for 30 years, the family and I. Every year, at the end of the summer when we start to close it up for the season, we do what they call an “I-C.” 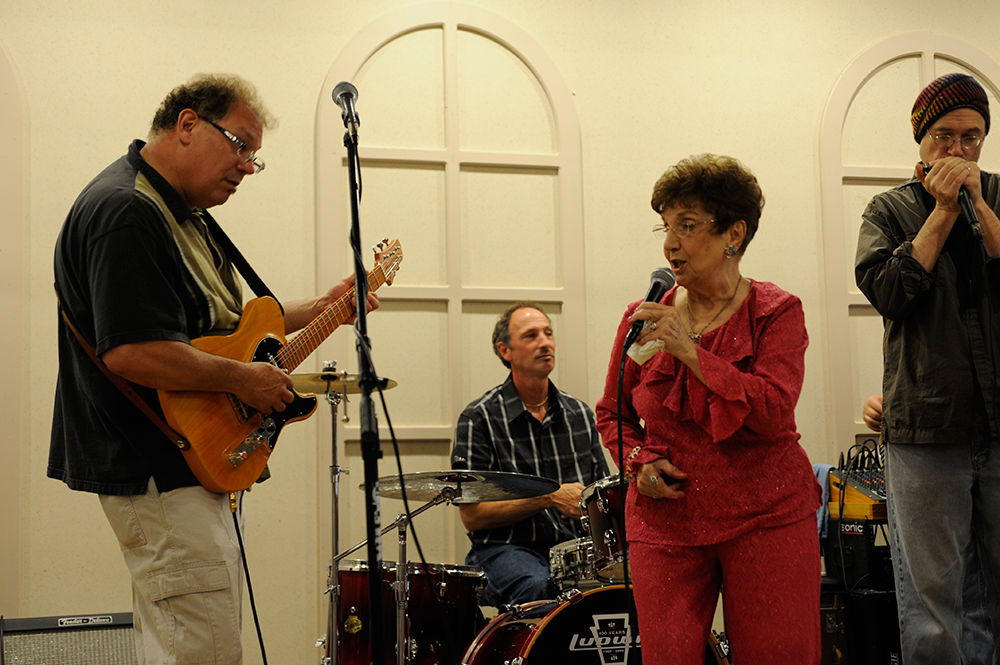 The Breau Family show, 2012. Denny’s mother, Betty Cody, toured extensively with Denny’s father Hal Lone Pine during the ‘40s and ‘50s, and she is considered a “legend in country music.” (Photo: Denny Breau and family)

BREAU: That’s what that means, yeah. You kind of go through the camp and make sure you didn't forget your sunglasses or your favorite bathing suit or your favorite CD. It could be just about anything you just don't want to leave there so you have to go back ’cuz it's a ways away. One year we forgot the dog. Yup, we left the dog there. Had to turn around go back. "I thought you had the dog." "I thought you had the dog." Well, nobody had the dog, so…

CURWOOD: Now, I imagine your camp is some place near a lake in Maine.

BREAU: Yeah, it's up in Peru, Maine, a placed called Worthley Pond.

CURWOOD: And of course, because winter is coming along, that sets you up for a great Maine tradition.

BREAU: I've never actually ice-fished myself. I've sat in the shacks and shared a few stories and a couple of glasses of this and that. You actually cook meals and just wait for a bite, and certainly around the holidays a lot of people love to get together and get ice-fishing and maybe have a nice fresh salmon along with the pot roast, ya’ know.

BREAU: So anyway, this next song is called “Ice-Fishing.” I kind of wrote it to poke fun at Mainers a little bit and their garb and the tradition itself and just all of the fun aspects of ice fishing. I hope you like it.

Now way up north where the cold wind blows
When the lakes freeze over people chop little holes
Drop a line, kick back, a little wooden shack
And if the ice didn’t melt they’d never go back
Just a little wood stove and they’re waitin’ for a bite
Gonna fish all day, drink all night
I’ll be sittin right here when the winter ends
Sittin’ right here when it comes again.
And we’ll go
Ice fishin’
Aint’ nothin’ quite the same.
Ice fishin’
It’s just a party by another name.
Well, I’ve got thirty below
Three feet of snow
But grab your stuff ‘cuz we’re still gonna go
Ice fishin’
Ain’t nothin’ quite the same
Ice fishin’
It’s tradition here in Maine.

Whew! Oh it sure is cold today, though…

CURWOOD: So you've been a few times, but you haven't ever caught anything, huh?

BREAU: A buzz. [LAUGHS] About it. Right there. Yeah.

CURWOOD: So you describe yourself as French-Canadian, but I understand recently you had a sort of a deeper revelation about where your cultural home might be. 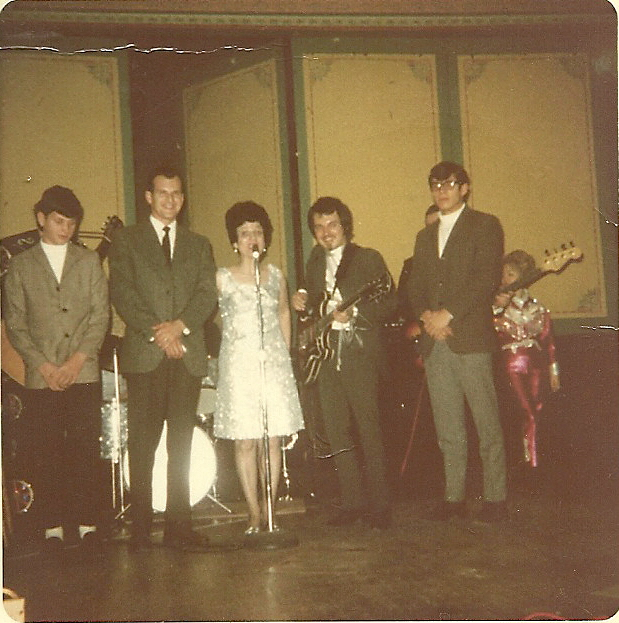 BREAU: I did. I did, as a matter of fact, I was made aware that Breau was actually an Acadian name. I just happened to be reading this article about how the Acadians had been kicked out of Canada by the English back in the 1700s sometime, and, I don't know, this song kind of fell out. The children and the mothers, they were put on ships, and they were told to just go, not knowing what the future might bring.

CURWOOD: And of course, we know Acadians in northern Maine and New Brunswick and eastern Québec, but also in Louisiana, there are Cajuns.

BREAU: Absolutely, the Cajuns, where a lot of the Acadians ended up. I thought when they left Canada that they immediately went to Louisiana and various places, but I found out that they went back to France first, and France didn't want ’em anymore so that's when they ended up coming back and settling in Louisiana. So I came by the song first and then found out I was actually related to these people down the road. A little song called “Acadie.”

Swooped down, did his men like a hurricane
said “Leave this place or die.”
And forced upon the tall ships, and cast upon the wind
Your land we claim, it is named:

Acadie, you were my home
Now I long for the life I once knew
Deep in my heart and in my soul
Never comin’ back home to you.

How will we survive?
With nothing but the shirts on our backs.
The young without their father and they long for him at night
But he ain’t never coming back
What did we do to deserve such a fate
And why have you turned the other way?
Heaven on earth
A living hell
And I curse your name as I pray:

CURWOOD: Oh, that's so sweet and so sad.

BREAU: Thank you. Thank you very much.

BREAU: Yeah, that’s very true. It's going to be a rough one this year because back in July my mom passed away. 90 years old and, uh, we'll miss her. But, ya’ know, we'll still experience the joy of being together, and certainly we'll remember Mom. She was such a big part of my life, not only as my mother, but we worked together professionally for, gosh, 30, 40 years, and it really is a tough thing to deal with. She'll be there in spirit, I'm sure. 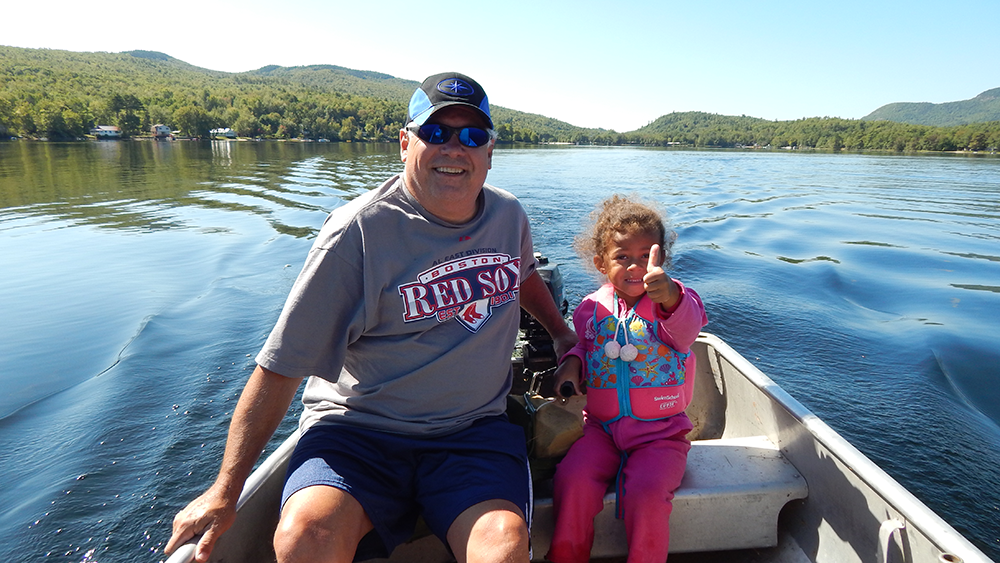 Singer/songwriter Denny Breau and granddaughter, Aiyana, on the lake at their family “camp” in Peru, Maine in the summer of 2014. Aiyana is the “daughter’s daughter” in Denny’s song by that title. (Photo: Denny Breau and family)

BREAU: There you go.

CURWOOD: And when you gather with your family, how many of you are still singing?

BREAU: My granddaughter is very, very, very musical, loves to sing. One of the first things I wanted to do when she was born was write a song for my first granddaughter. Out at the camp again, walking around, guitar over my shoulder, just walking through the camp by myself, staring out at the lake, trying to come up with that first line, and then I happened to stumble on, “When I'm holding my daughter's daughter.” And I thought, “Oh, man, that's the line I've been looking for, and the rest of it fell out. For all you grandparents out there, love your grandkids.

When I’m holding my daughter’s daughter
The world’s a better place
I see peace, love, innocence
On her tiny face
She’s a new day sun, shining from above
In a tropical dream
Wake up, wake up my little angel
Aiyana serene

She’s a precious little jewel
To be taken to the heart
And may she grow up to be strong and proud
May she waltz through all of life’s changes
And when she sings,
Sing it loud.

When I’m holding my daughter’s daughter
Chills run up my spine.
I wish your mother and our fathers could have seen her
Taken before their time.
But she’s a new day sun and she’s shining from above
In a tropical dream.
Wake up, wake up my little angel
Aiyana Serene

CURWOOD: Well, Denny, you got me all choked up there. 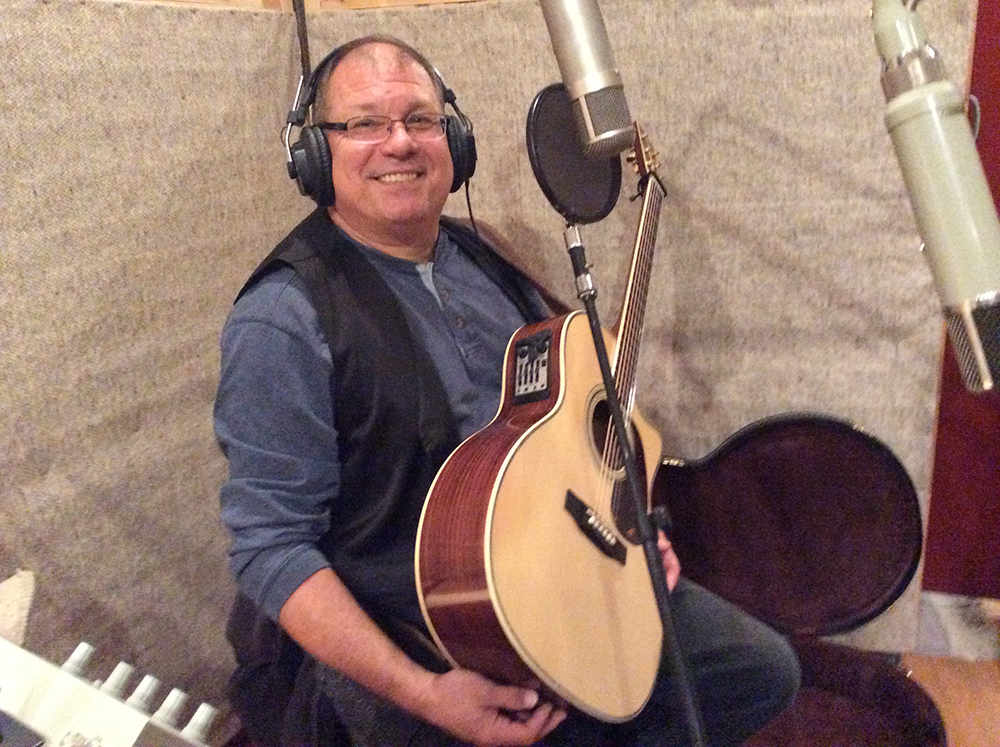 Singer/songwriter Denny Breau recording in the studio for the Living on Earth broadcast. (Photo: Steve Curwood)

CURWOOD: And one would hope that our home that we share, this Earth, will be great for your daughter's daughter. Denny Breau is a songwriter, musician, storyteller, and Maine-uh. Did I say that right?

BREAU: [LAUGHS] There you go. Lobstuh.