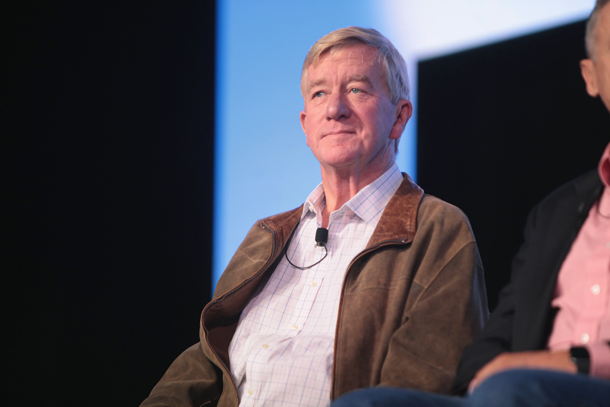 Republican Presidential candidate Bill Weld is looking to bring environmental priorities, including more stringent regulations, back to the Grand Old Party. The former Governor of Massachusetts sat down with Host Bobby Bascomb to discuss his plans for addressing the climate crisis and the stark differences between his environmental platform and that of the incumbent, President Trump.

New Hampshire recently held the nation’s first 2020 primary election. For months before the election granite state residents, like me, get special attention from the candidates – a meet and greet at the local book store, daily fliers in the mail, door to door canvassers, and, as was the case for me last weekend, an unexpected visit from a presidential candidate at the local coffee shop.

Republican Bill Weld stopped in at Me & Ollie’s bakery and coffee shop in Exeter, New Hampshire on Sunday afternoon. The little brick café sits across the street from town hall, where Abraham Lincoln spoke back in 1860. Nearly every table was full as Governor Weld made the rounds and shook hands with patrons to introduce himself.

Mr. Weld was the Republican Governor of Massachusetts from 1991 to ’97, and he’s challenging Donald Trump for his party’s nomination for president. The governor calls for a tax on carbon and expresses support for nuclear energy and natural gas as a way to reduce our greenhouse gas emissions, and he’s pledged to re-join the Paris Climate Accord if elected. As Governor of Massachusetts Mr. Weld helped protect some 100,000 acres of open space and signed into law the Rivers Protection Act, which required a development buffer around the Bay State’s rivers and streams. In fact, he announced the bill while standing beside the Charles River and then, to make a point, jumped in fully clothed. The Charles was still recovering from decades of industrial pollution at that point and considered a no-go for swimming. Mr. Weld’s unofficial mascot for his campaign is a fisher cat, a small carnivorous mammal in the weasel family, native to the forests of New England. It has a reputation as a tenacious animal and one of the few to successfully prey on porcupines. Governor Weld has said he’s bringing that same ferocious spirit to his campaign to win the Republican Party’s nomination and unseat President Trump. After he wrapped up with would-be voters at the café, I caught up with Governor Weld and asked him about his motivation for running.

WELD: I think the need for somebody to stand up to Donald Trump is absolutely imperative. This guy says climate change is a hoax? I mean, give me a break.

BASCOMB: What would be your agenda to address the climate change problem?

WELD: So, I think we have to put a price on carbon and have the coal companies, and the oil companies, and the mining companies pay that fee. And that would be about $500 billion a year. And you’d keep sliding the fee up until it got so high that they would say ouch, we don't want to put any more carbon into the atmosphere. And that's what you need to have happen in order for the polar ice cap, not to melt. No protestations about how I'm going to spend $16.3 trillions, no claims about how I love wind and solar. That doesn't do it. You got to put a price on carbon.

BASCOMB: Your Republican colleagues in Congress, though, are going to probably put the brakes on that. How would you address the political divide when it comes to this issue?

WELD: Well, you know, it'd be nice to have an act of Congress setting that up. On the other hand, the President does have national emergency powers. And this is not just a national emergency. It would, you know, totally rearrange our coastlines and bring catastrophic weather in all parts of the country, including particularly the flatter parts in the middle of the country, so no one would be safe. So, the President would have the authority to declare a national emergency there. And unlike the alligators in the walls of the border with Mexico that Mr. Trump wants this one would be a national emergency, even a planetary emergency. So, I'm sure that would be upheld as a valid exercise of that power. And I would do it myself, if Congress wouldn't act and frankly, I'd be cautiously pessimistic about Congress acting, they'd be saying, oh, we'll have to shoot Bessie the Cow. We won't be able to fly in airplanes anymore. All the sort of scare stories that you hear when somebody really doesn't want to do anything. 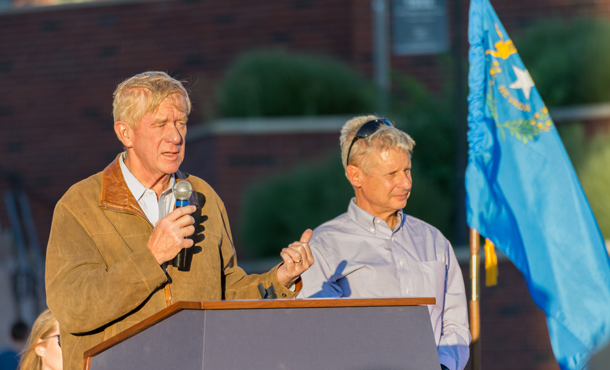 BASCOMB: And House Democrats recently introduced the Clean Future Act, which is a pretty broad overview of trying to address the climate change problem. What is your opinion on that?

WELD: I'm not sure that I've had an opportunity to study that one. But you know, one of them, the clean New Deal, says we're going to make so much money from all the new economy and the green energy that we're going to offer everyone in the country a guaranteed basic income, irrespective of whether they're willing to work. And that's a direct quote, that's not going to fly in the United States, I'm so sorry.

BASCOMB: Well, the Green New Deal, what is your opinion of it broadly, though?

WELD: Well, all the energy stuff is fine. It's this stuff about how we're going to give everybody an income and they don't have to work. That's not fine. And I think even you know, people who were receiving assistance, if they, you know, can work a little bit at a local school or hospital, doesn't shock my conscience.

WELD: Yeah, I completely buy into the idea of environmental justice. And matter of fact, I have a lot to say to the minority community, and you know, they get the short end every time. I've done a fair amount. I was a federal prosecutor. And, you know, I did a fair amount anti-redlining, which is how banks and insurance companies make it tough for people to get a mortgage. So it creates just 100% racial segregation, which is a very bad thing.

BASCOMB: The Trump Administration has rolled back dozens of environmental laws at this point, some put in place by the Obama administration, others that go back to the Clean Water Act from the 1970s.

BASCOMB: Exactly. Are there any of those that rise to the top of your concern?

WELD: They all do. I mean, it's outrageous. The President claims credit for deregulation. He said he's making it easier for business? Baloney! Most of the regs that he's repealed are protections for clean air and clean water. It's tough enough to get those in in the first place without Scott Pruitt coming in and repealing all the desirable regulations. When I was US Attorney, I cleaned up Boston Harbor. When I was Governor, I enacted the Rivers Protection Act. And I've been a lifelong proponent of government necessity to intervene on clean air and clean water. Because the economies of scale are such that you can't rely on individuals or a single business to do it. It costs too much money. So it has to be the government. I argue with all my libertarian friends about this because it's one place where I say we need government action. And you can't be laissez-faire when it comes to protecting the environment.

BASCOMB: Scientists tell us that millions of species are going extinct partly because of climate change, pollution and a number of factors. And environmental groups want to create a national emergency, essentially, around the issue of biodiversity loss. How do you respond to that notion?

WELD: Well, I totally agree with that. I mean, I am a birder with a life list and bird species have taken it on the chin. But beyond that, you know, I grew up in the woods on 600 acres with huge biodiversity so I'm kind of spoiled. And recently I've moved back to a 7,000 acre wildlife refuge in Massachusetts. So all my neighbors are coyotes and deer. And unfortunately, ticks. But ticks, as Mitt Romney might say, ticks are people too.

BASCOMB: [LAUGHS] Now, if you're a lifelong birder with a bird list, are you gonna have time to be president? Because birders are pretty serious people when it comes to ticking those boxes off.

WELD: Yeah, they are. I was taken out up in Coös County on a bird trip early on in my campaign. And it took most of the morning, and we decided after that that was my last bird trip. And that life list is not going to get any longer in office I assure you, unless I make the summer White House in the Galapagos.

BASCOMB: Oh, now you're talking. All right, Governor Weld, thank you so much for taking this time with me.

WELD: Thanks a lot. It was great.

BASCOMB: Governor Weld earned nearly 10 percent of the Republican votes in New Hampshire and though President Trump easily secured the state’s delegates, Mr. Weld has pledged to continue his campaign and offer Republicans and independent voters a greener alternative to the incumbent.

Patriot Ledger | “From the Archives: Gov. Weld Dives Into the Charles River”