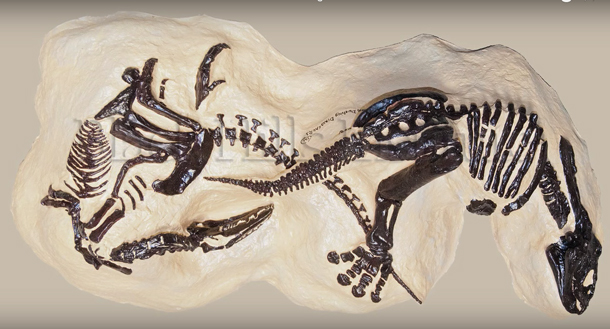 The Dueling Dinosaurs were fossilized while apparently locked in battle. (Photo: Courtesy of The Black Hills Institute of Geological Research)

In 2006, an amateur fossil hunter made an unprecedented find: two dinosaurs fossilized while apparently locked in battle. A court case that followed over mineral versus surface rights brings into question the future of fossil discovery in the US. Living on Earth’s Jay Feinstein has the story.

BASCOMB: It’s been more than 200 years since the first dinosaur fossils were scientifically described. Since then those prehistoric giants have captivated people of all ages, inspiring statues, theme parks and of course, a film franchise. But a fossil discovery in Montana may upend the way we discover dinosaur bones and who can own them to begin with. Living on Earth’s Jay Feinstein has the story.

FEINSTEIN: So the story starts back in 2006 with a fossil find on a ranch in Montana: Dinosaur bones, potentially 66 million years old, were embedded in rock, horns and bones completely intact.

Peter Larson is director of the Black Hills Institute of Geological Research, a for-profit fossil preparation and excavation company, which helped prepare the find, known as the “Dueling Dinosaurs.”

LARSON: It’s a Nanotyrannus lancensis, which is a smaller relative of Tyrannosaurus rex, and Triceratops horridus.

FEINSTEIN: He says these dinosaurs were preserved while locked in battle.

FEINSTEIN: And then something extraordinary happened. 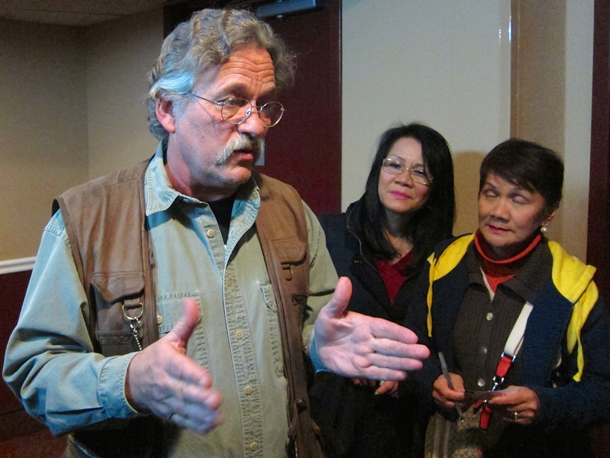 Peter Larson is director of the Black Hills Institute of Geological Research, a fossil excavation and preparation company in Montana. (Photo: Montclair Film, Flickr CC BY 2.0)

LARSON: We had an earthquake that literally sucked them down into the sand basically about the moment of their death. That’s why they were preserved as complete skeletons and nobody ate them.

FEINSTEIN: Peter says they were found in what’s called a seismite, the jagged edges of the sedimentary rock suggesting an earthquake. And he says this find is special because we don’t usually get to know the cause of death for dinosaurs.

LARSON: When you find a dinosaur, you’re looking at a cold case, literally. And trying to find the cause of death is almost never possible. But on occasion, you can find some evidence that points to the cause of death. In this particular case, the Triceratops skeleton had actually two Nanotyrannus teeth buried within what would be the flesh envelope and they both, both of these animals have some skin preserved as well. So they’re really really super important.

FEINSTEIN: And it turned out there were many more fossils on the same property: a Triceratops foot and skull, and then, a complete T-Rex. Potentially one of only a dozen ever found in such condition. But before long, these fossils became entangled in a legal battle that’s lasted over a decade.

FEINSTEIN: The question is who owns these specimens, potentially worth millions of dollars on the private fossil collection market. Usually, when a fossil is found on private land in the United States, it belongs to the landowner: Finders’ keepers. In this case, the finders were amateur fossil hunters that had planned to split the multi-million dollar proceeds from these specimens with the landowner.

But the problem is there wasn’t just one landowner. Land in the West is often severed into surface rights and mineral rights. And in the State of Montana, oil and gas companies often own the mineral rights. Historically, it hasn’t mattered. For over 100 years, fossils have been considered part of the surface rights, just like a rock you’d find in your backyard. But in the case of the Dueling Dinosaurs, the mineral rights holder fought back in court, saying they should own the specimens. Because they say fossils are minerals. Again, Peter Larson. 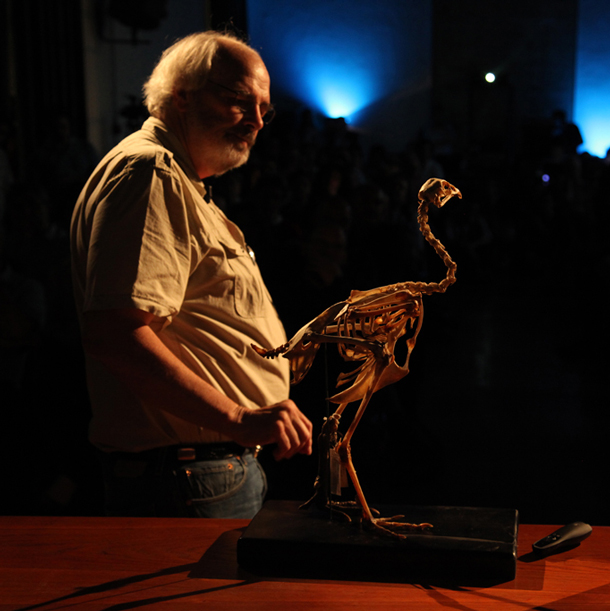 LARSON: It was heard by a three-judge panel, and in a split decision, they decided that the fossils were part of the mineral estate, which surprised everybody. No one has ever made this claim before, ever. There is no place that you can find where fossils have been defined as minerals, anywhere in any statute in any state.

FEINSTEIN: That means Peter and his team won’t be able to complete the sale of the dueling dinosaurs and the homeowners also miss out on their cut.

And fossils are a huge part of the culture for people in Montana. So this decision was a blow to the idea that any homeowner could find and display a fossil they might find in their backyard.

The decision was so unpopular in the State of Montana that Peter’s team successfully filed a petition for a federal re-review of the case. Very few re-reviews are granted and this one was, so the case goes back to the Montana Supreme Court to decide. But some paleontologists balk at the notion of selling fossils to begin with.

FEINSTEIN: Jack made some of the most famous paleontological discoveries of the 20th century, including that dinosaurs care for their young. And he has one more impressive credential.

HORNER: I was the technical advisor for all 5 Jurassic Park & Jurassic World movies, yes. It’s fiction, did you know that?

FEINSTEIN: Jack says for him, it doesn’t matter whether or not fossils are minerals, because this court case would mostly just affect commercial fossil hunters, not what he calls real scientists. For the most part, paleontologists like Jack work on federal land, not private land. The federal government owns both surface and mineral rights on its property, and they aren’t trying to make money from selling dinosaur bones. Jack says in the interest of good science, fossil hunting should be paid for by grants, not from selling fossils.

HORNER: Commercial collectors are people that go looking for dinosaurs or other fossils to make money, whereas a paleontologist is digging them up for data so they can publish papers about them. We’re museums and we don’t really pay money for fossils, we save them. I mean just take them and save them in the public trust, so they’re for everybody. 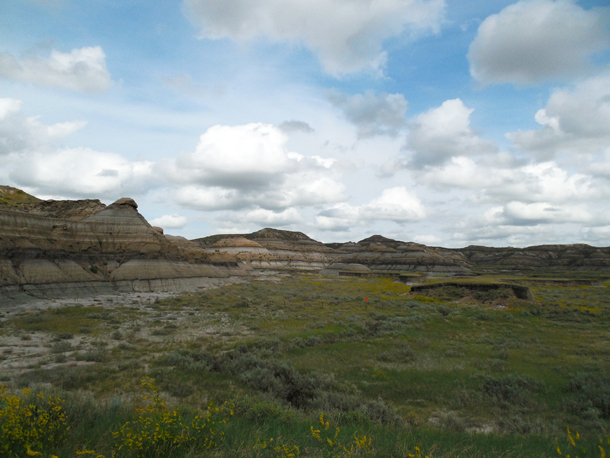 FEINSTEIN: And Jack has a lot of questions about the Dueling Dinosaur fossils to begin with.

FEINSTEIN: He also questions much of the story behind the fossils, including the earthquake and the cause of death.

HORNER: Well we don’t actually know that, do we? I mean that’s, see they haven’t been studied scientifically. We have no idea. Those are the commercial collectors that are saying that.

FEINSTEIN: Peter Larson disputes this critique of his methods, saying that no one is getting rich from fossil hunting, and they took meticulous scientific notes in digging up the Dueling Dinosaurs.

LARSON: Well, you know, this is, despite what some people may think, this is still a capitalistic society, we depend -- and it works pretty well. There are some problems. But people need to be rewarded for their work. This is a way that really fantastic fossils can be found that increases the interest in paleontology, that makes sure paleontologists have a job.

FEINSTEIN: So we have a unique fossil find worth millions of dollars and an unprecedented court case. But the debate continues. Should we even sell fossils to begin with? Either way, this case is in motion and the results will be announced in coming months.


Smithsonian Magazine | “Will the Public Ever Get to See the ‘Dueling Dinosaurs?’”