Cheap Oil and the Climate

The crude oil price drop will likely lead to consolidation of oil companies. Pictured is an ExxonMobil facility near Chicago. (Photo: Richard Hurd, Flickr, CC BY 2.0)

Amid the turmoil of the novel corona virus pandemic, oil prices recently had the largest one-day plunge since 1991, with major implications for the shale industry and workers, the climate and national security. Lorne Stockman, senior analyst at Oil Change International, joins Host Steve Curwood to discuss how a Green New Deal framework with clean energy could reduce the impact of the boom-bust oil price cycle.

Amid all the turmoil related to the novel corona virus pandemic, the price of oil has crashed from over 50 dollars a barrel in the last week of February down to around 30 dollars most recently. And this has profound implications for the environment, US national security and the economy. The US is now the world’s biggest producer of oil, thanks to hydraulic fracturing or fracking from oil shale, but it’s hard for fracking companies to make money under 50 dollars a barrel. So, a wave of bankruptcies and layoffs for the US fracking industry seems likely, and America’s strategic freedom from foreign oil could be in jeopardy as well. But Saudi Arabia and Russia can afford to pump oil for less. And now by having a price war they can block US competition and get their own reserves out of the ground, ahead of an expected wave of rules and carbon taxes to protect a livable climate. In the meantime, cheap oil also discourages the transition to renewables. For more we turn to Lorne Stockman, a senior research analyst at Oil Change International. Welcome back to Living on Earth Lorne!

STOCKMAN: Thank you. It's good to be here.

CURWOOD: So your expertise in part is looking at the shale petroleum extraction, fracking, it's often called here. How do low oil prices affect the continued shale extraction here in the US?

STOCKMAN: Well, obviously they're not great for shale operators' profitability and the shale sector has been going through relatively hard times in the last few months as the growth in oil demand has been slowing down. But with the crash that's just happened, it does put a lot of shale operators into the red, and the current oil price is generally below the break even oil price needed for them to drill new wells and bring new production online.

CURWOOD: With these low oil prices, who are the winners and who are the losers, keeping the US shale oil extraction in mind.

STOCKMAN: Generally speaking, what they call the independents, you know, the American oil producing companies that are primarily focused on just producing oil in the United States and they're not integrated, like the majors, they don't own refineries, etc. Those companies are going to be hurting pretty bad from this. And there's no doubt we're going to see companies go on to file for bankruptcy. But it remains to be seen whether this is really sort of the end of growth in the shale patch, which some people are saying. Because, you know, what generally happens is we see a certain amount of consolidation, we see the assets of bankrupt companies get sold cheaply and bought up by the better capitalized companies. And we see the resources sort of being concentrated in fewer hands. 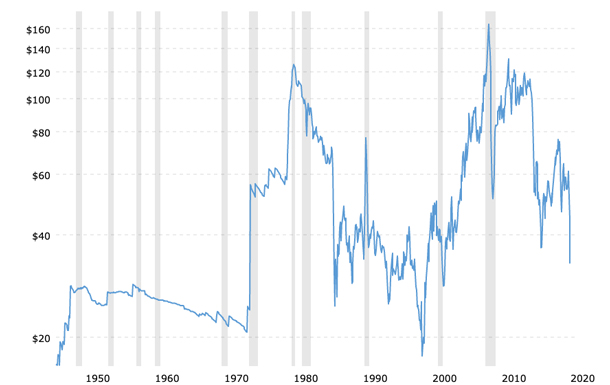 CURWOOD: Sounds like you're forecasting a lot of turmoil then in the fracking business here in the United States, trouble for the companies. What about the people who work for these fracking companies?

STOCKMAN: Right? I mean, they're the real losers here. And you know, we're going to see layoffs. We're going to see You know everything from truck drivers to the roughnecks at well pads, drilling sites all across the board in the shale producing regions, whether that's Texas, New Mexico, North Dakota, there are going to be job losses. We're seeing calls from the industry for some kind of bailout from the Trump administration. And it remains to be seen what would happen there, but you know, I would say we need to see support for the workers over the shareholders of these companies.

CURWOOD: Now, how might this drop in the oil price effect the transition to clean energy here in the United States and worldwide?

STOCKMAN: The price of oil being low, as low as it is today, is obviously bad for the transition to clean energy because those polluting fossil fuels, oil and gas, are cheaper today than they were last year. And that constitutes competition for clean energy technologies that we're trying to transition to. I think how governments could take this opportunity to accelerate a clean energy transition is by following the kind of policies that are being recommended in the Green New Deal, as we see in Europe, or what's been proposed in the United States. And that comes back, you know, that particularly comes back to the workers. We should be supporting those workers over the oil corporations and supporting their transition to cleaner sectors of the economy and new sectors of the economy.

CURWOOD: Talk to me about the impact of this huge drop in the price of oil in the short term versus the long term.

STOCKMAN: So you know, in the short term, there's going to be layoffs, there's going to be less drilling, there's going to be less activity. But the direct impact of that slowdown is in fact, potentially an easing of the supply glut that's been caused by both U.S. shale drilling and Saudi Arabia and Russia's action and consequent rise in oil prices, which then can trigger more drilling. Of course, by then there may be less players in the market. So, you know longer term, unless we see concerted effort to transition away from these polluting sources, we could, you know, be back into the boom part of the boom bust cycle within a year or more depending on what happens externally with the virus and global demand.

CURWOOD: What's the impact of the oil and gas fracking industry on the environment?

STOCKMAN: Well, many and varied. I mean, you know, the local impacts are extreme. I was in the Permian Basin in Texas, New Mexico, which is, you know, the hottest shale play in recent years, in November of last year, and you wouldn't believe what you see as you drive around there. We saw oil wells on fire. We saw gas flares everywhere. We see, you know, a landscape completely littered with oil rigs and pipelines and construction equipment, and roads completely choked up with heavy truck traffic. But that's locally. Globally, we've seen the U.S. literally pushing oil and gas into global markets and crashing the price of both of those commodities globally. And that's making the transition to clean energy much more difficult globally. It's very difficult to transition away from something, the production of which is continuing to grow and the price of which is constantly coming down.

CURWOOD: So what do you think it would take to disrupt the U.S. fracking industry? 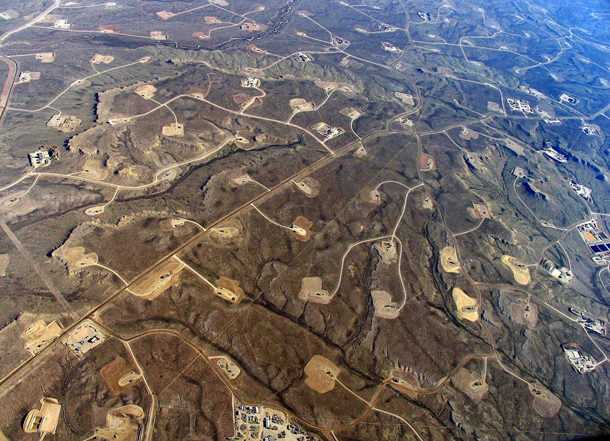 The United States has increased its production of oil in the last decade, but the recent sudden and deep drop in oil prices poses risks to the industry. Pictured is Jonah Field oil & gas facility in Wyoming. (Photo: Bruce Gordon, Flickr, CC BY 2.0)

STOCKMAN: Eventually, we're going to come to grips with the climate crisis, right, and we have this choice of either continuing to dig the hole deeper and continuing to drill for more oil and gas, in which case, you know, when climate policy kicks in and demand drops, we have this economic crisis. Or we have this choice of managing that decline and implementing the kinds of policies that were that we've seen proposed in the Green New Deal. You know, you can look at what's happening today, we see producers battling for market share. That's what's going on. Right. And we're seeing the higher cost producers take a hit as the lower cost producers battle for market share. That's a window on what will happen again, in the future, if we don't manage the decline of oil and gas in this country.

CURWOOD: How does this drop in the price of oil and the impact on the fracking, the shale oil business, affect the worldview of many in this country about the strategic need for oil reserves? In other words, how does this fit into the discussion on national security?

STOCKMAN: Well, that's a very interesting question. I mean, on the whole, the U.S. has been using the oil boom as a sort of weapon, if you like, to decrease reliance on other oil exporters, and that's been seen as a positive thing for national security. Now, of course, in this situation, we start to see how vulnerable the U.S. economy is to being so dependent on U.S. oil and gas production and exports. In other words, you know, simply by producing more oil and not actually reducing our dependence on using oil, that national security benefit is blunted. And so now we're going to see economic impact, particularly in those states, and you know, the U.S. has a more diversified economy than other big oil producers, but still, in those states where the oil and gas is produced North Dakota, New Mexico, Texas, Colorado, etc. Pennsylvania. These impacts, economic impacts, will be very real and this growing dependence on oil and gas money will possibly now be seen as a threat to economic security. I very much see this as a preview of to what might happen in a world actually grappling with the climate crisis and doing something about it. And I think that is, you know, part of what's informing what Saudi Arabia and Russia and other OPEC producers are doing today. They see that there's way more supply of oil and gas in the world than demand can soak up. They see demand growth slowing. They see countries in Europe and elsewhere actually setting deadlines on when they will stop selling vehicles using gasoline and diesel. And the pressure is on. So you know, I think that does play a part in informing the move that's been made by these players. And I think there'll be more to come as things unfold in the coming decade.

CURWOOD: Lorne Stockman is a senior research analyst at Oil Change International. Lorne, thanks so much for taking the time with us today.

STOCKMAN: Thank you very much.