Beavers Move Into the Arctic 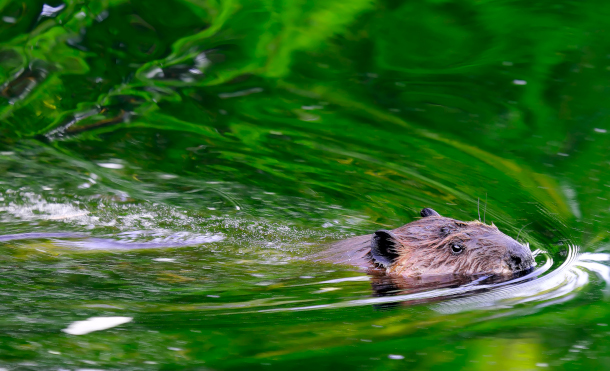 The Arctic is warming roughly twice as fast as much of the globe and some species are already moving toward the poles in search of new habitat. And as beavers move north into the Arctic these big rodents known as “ecosystem engineers” are bringing big changes to the landscape. Ben Goldfarb is the author of Eager: the Surprising, Secret Life of Beavers and Why They Matter and joins Living on Earth’s Jenni Doering to discuss the concerns and benefits of beavers in the Arctic.

DOERING: The Arctic is thought to be warming faster than any other region on earth, and that’s creating new habitat for grizzly bears, moose, salmon, wolves, and beavers. And as nature’s “ecosystem engineers” beavers are bringing big changes to the Arctic landscape. Ben Goldfarb is an environmental journalist and author of the book Eager: The Surprising, Secret Life of Beavers and Why They Matter. He says the tenacious rodents are making themselves right at home in the Arctic.

GOLDFARB: Yeah, so beavers are colonizing or perhaps recolonizing the Arctic at a pretty impressive rate. The guy who studied this the closest is an ecologist named Ken Tape in Alaska. And basically what he found by looking at satellite images--because beaver complexes are actually so large and impressive you can see them in satellite imagery--is that between 1999 and 2014, beavers built 56 new complexes of ponds in this area in the Arctic that Tape studied. And beavers were actually moving north by about eight kilometers, so five miles or so, per year. So they're moving north at a really impressive rate. The why is basically because the climate is changing, and the habitat is becoming suitable for them, right? Beavers need trees. And as the willow line advances north into the previously treeless tundra, it's creating this available food and building material for them, this resource that beavers need. A big question is whether this is really a new colonization, or whether they're really recolonizing areas where they used to live, before they were trapped out by fur traders. So certainly they're moving north. Whether that's a novel colonization event or a recolonization is still to be determined.

DOERING: Right, because I remember when we talked about your book, Eager, you said that there were hundreds of millions of beavers all over North America. And they're now recovering, right? What do we know right now about how many beavers there are at this point? 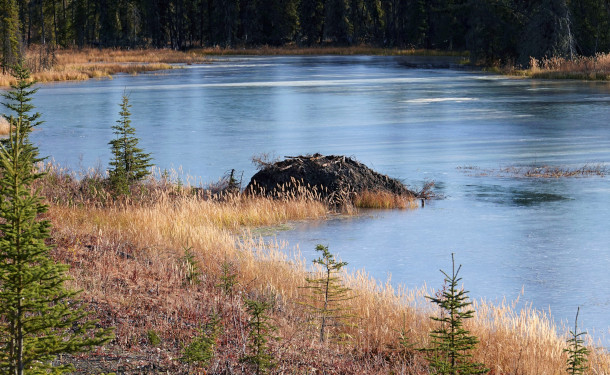 Beaver complexes can bring surprising benefits to any landscape, such as fostering habitats for a variety of other species. (Photo: JLS Photography-Alaska, Flickr, CC BY-NC-ND 2.0)

DOERING: So beavers are, of course, nature's engineers or ecosystem engineers. So on a physical level, how are beaver dams and ponds changing the Arctic tundra?

GOLDFARB: Yeah, I mean, certainly, as beavers build dams, they create these giant impoundments, right, these really impressive ponds, which can be many, many times the size of your typical Olympic swimming pool. And they're turning these historically kind of single-threaded channels and making them these big complexes of ponds and wetlands. And the big concern that some people have about that is that as a result, beavers may be melting the permafrost. There is lots of methane locked up in that permafrost. So as beavers spread water out, they may be releasing a very potent greenhouse gas into the atmosphere. But of course, beavers' contribution to climate change will always be a minuscule fraction of humans' contribution. So they're certainly not the ones to blame for this problem. And in fact I'd also point out that, you know, beavers are also fantastic sequesters of carbon, right, that you know, that a beaver colony, a beaver pond is full of all kinds of organic, carbon rich material. And there have been fantastic studies showing that beavers are locking up lots of carbon. So while it's true that in the Arctic, they may be releasing methane, elsewhere in their range, you know, they're keeping a lot of carbon out of the atmosphere.

DOERING: Ben, I know that one of the reasons that beavers are such an attractive animal to bring back in certain places, especially in the very arid American West is because their ponds lock up large amounts of water on the landscape and help revegetate and add moisture to a landscape that's drying out because of climate change. What are the potential benefits that they could bring to the Arctic? 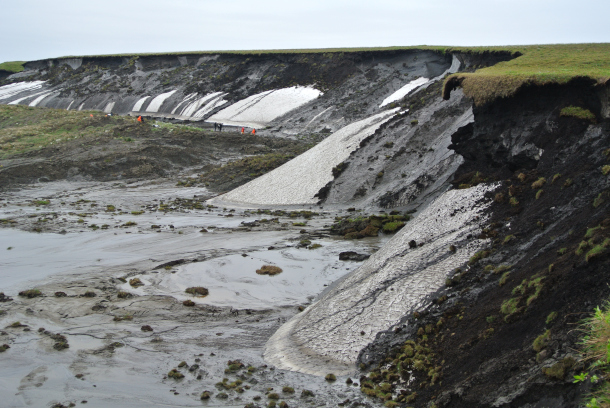 GOLDFARB: Yeah, you know, I've been interested in the way that some of these studies have been covered by the media, that the kind of the default assumption is that because beavers are moving to the Arctic, you know, yes, they're melting some permafrost, that must be a negative interaction. I remember a few years ago, the New York Times did a study where they called beavers "agents of Arctic destruction," as though beavers have done more to the Arctic than you know, than we humans have. And, you know, and to me, I mean, I think it's really important to remember that beavers are just these amazing keystone species, right? They're these animals that disproportionately support a lot of life wherever they are. I mean, because they create these wonderful pond and wetland complexes, you know, they just engineer fabulous habitat for all kinds of creatures, you know, trout and salmon, amphibians, waterfowl, songbirds, you know, other aquatic mammals like otters and mink and muskrat and moose. You know, you name it, you know, there's just this amazing body of literature about how important beavers are for other organisms. So I think that it's really important to just keep in mind that you know, some of the changes that beavers are inducing in the Arctic may be beneficial for some species, you know that okay, perhaps the melting of the permafrost is negative, but beavers are also to engineering habitat for animals that we know are moving north anyway, right? They're sort of paving the way for some of these creatures. So instead of "agents of Arctic destruction," you know, they're "agents of Arctic adaptation," at least for some organisms, I think.

DOERING: That's right, I mean, beavers are certainly not the only species shifting towards the poles as climate change happens. So how should we be thinking about which species, quote unquote, "belong" where in this new and evolving reality?

GOLDFARB: Yeah, it's a really interesting, philosophical question, I think. I mean, are animals that move north because of our actions in warming the climate, are those invasive species? I would argue not. They're animals that are just sort of resourcefully adapting to the conditions that we've created for them. We know that salmon, for example, you know, salmon are basically disappearing, in a lot of California, their native range there, but they're also salmon showing up in in new rivers in the Arctic, where they haven't been seen before. And we know that beavers create fantastic salmon habitat, you know, that baby salmon love to rear, to grow up, in the slow water refuges that beavers create. So I think that, you know, as I mentioned earlier, I think that for salmon and some other species, beavers could be doing potentially, at some point, a lot of good. 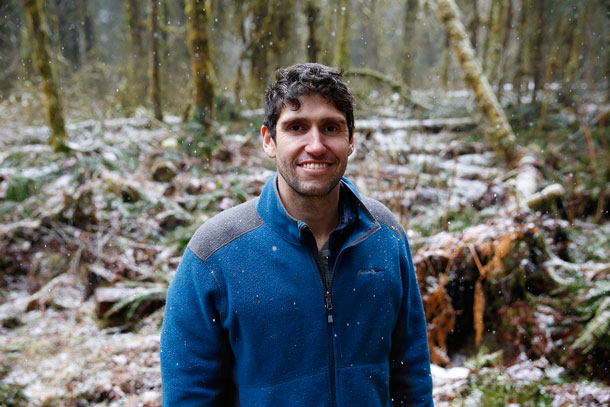 DOERING: You know, beavers, as we know, they can cause some problems for communities when they first move in, maybe recolonize an area. They do cut down trees, and they do flood areas. Can you give us an example of how communities in the American West, for example, ranchers, were able to gradually switch to a "pro-beaver" mindset and sort of see some of the benefits of these engineers?

GOLDFARB: Yeah, it's a really good question. I mean, certainly beavers are not the easiest animals to live with. Right? There are all kinds of impacts to human infrastructure that beavers cause. As a result, there's this very long history of beaver persecution, right? First, we killed them for their pelts. And then as they started to recover in the 20th century, we killed them for having the temerity to mess with our stuff. And there are lots and lots of ranchers out there who I've talked to who told me, "Yeah, you know, yeah, my dad killed beavers, and his dad killed beavers, and his dad killed beavers for damming and irrigation ditches or you know, or road culverts or what have you. But, as the climate gets hotter and drier, and it becomes more and more important to keep water on the landscape, I think lots of farmers and ranchers are recognizing the benefits of having these animals around. Beavers are basically agents of water storage and water creation in a sense, you know, they create these wonderful watering holes and they're also irrigators, right? They spread water out, they force water into the ground. So they're, you know, when you look at a beaver pond, you know, you see all of that visible surface water, but you don't necessarily see the water table rising, the aquifers being recharged, the soil being hydrated. So there's lots of literature about beavers basically being irrigators, being plant producers, and if you're a rancher, you know with your cows in a valley with beavers in it, you know, you're going to have more forage for your cattle, you know, the beavers are just making the land lusher. So certainly, a lot of ranchers have appreciated that benefit.

DOERING: That’s Ben Goldfarb, environmental journalist and author of Eager: The Surprising, Secret Life of Beavers and Why They Matter, speaking with Living on Earth’s Jenni Doering.


Living on Earth | “Eager: The Surprising Secret Life of Beavers”

Living on Earth | “How Beavers Help Save Water”

NOAA | “Beaver Engineering: Tracking A New Disturbance In The Arctic”

The Guardian | “Dam It: Beavers Head North to The Arctic as Tundra Continues to Heat Up”

NPR | “Beavers Have Been Moving Into The Arctic, Accelerating The Effects Of Climate Change”