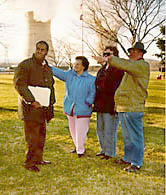 Elsie Weaver, Bonnie Valentine and Dale Weaver show Living on Earth's Steve Curwood the former site of Ms. Weaver's family farm house. Her family had farmed the land for generations, before the Three Mile Island nuclear plant was built in the 1970s.

As a life-long resident of Middletown, Pennsylvania, just across the river from the Three Mile Island plant, Bonnie Valentine talks with Steve about how the accident forever changed the character of her hometown.

CURWOOD: We say goodbye to Tom Kaufman and walk a few hundred feet to a parking lot to meet a woman with a different view of this nuclear facility. She takes us up a hill behind the visitors center, and points to a field now landscaped with huge towers that carry electric power from TMI.

CURWOOD: For 4 generations Bonnie Valentine's family farmed the land on and around Three Mile Island. Her grandfather was known county-wide for his watermelons and cantaloupes. That is, until the family homestead was sold and torn down to make room for the nuclear plant. Bonnie Valentine was 5 months pregnant with her second child, and outside washing windows on the morning of the accident. By the afternoon she was gone. She spent 2 weeks in a motel in York some 15 miles away, waiting out the crisis. When she returned she says her home town just wasn't the same.

VALENTINE: This little corner of the world has always been a safe and secure haven. The things that happened in the rest of the world did not happen here. And suddenly we were the focus of the entire world. I mean, it was really a change. Forever.

CURWOOD: What are some of the biggest things that changed forever for you?

VALENTINE: The safety and security that we felt in living here. That was certainly a big change. And as I look back upon it, we were really blissfully ignorant of how serious it could have been. Had we known, I think we would have been a lot more panicked. You know, here were all of our families, all these people that are so important to us. And, you know, they would have been lost to us. It's more frightening to me now than it was at the time. There's also, in this area, a strong faith. We believe that God was in control. And we're thankful, we're very thankful that it was not worse. It certainly could have been.

CURWOOD: How do you feel about this place, being here?

VALENTINE: Well, my husband worked on the Island for 7 years, and the whole time they were working on it I would tell him I liked it much better when it was just a peaceful little island in the middle of the Susquehanna River. You know, as children, I can remember my dad had a little boat, and he would take us over there, and we would hunt arrowheads. And I bet most of the little kids in Middletown had that experience. That it was just a wonderful place to go to and explore. And to me, that was a real loss.

CURWOOD: How would you say things are now between the nuclear power plant and the community? How would you describe that relationship.

VALENTINE: (sighs) I think we would probably be reluctant to believe anything they said, really. I would say there's a real credibility issue, because we know that they weren't totally honest with us 20 years ago when it happened. And once that trust is destroyed and you can't believe in the honesty of a corporation, you know, you're just not real comfortable with hearing what they have to say.

CURWOOD: Is this a good place to live? Do you want your children to stay here? Would you tell friends to come and live here?

Harrisburg, the state capital of Pennsylvania, is ten miles upstream from the Three Mile Island nuclear power plant. The plant's massive cooling towers and plume of water vapor are clearly visible from Harrisburg, along the banks of the Susquehanna River. (Photo: Terry FitzPatrick)

VALENTINE: Unh... That's a hard question. I love it because it's home to me. I want my children to stay here because I want them close to me (laughs), selfishly. As far as other people coming in? I don't know that TMI is really a threat any more. I don't know that it is. If it is we certainly don't hear about that. So I don't know, I really can't say if I would advise other people to come here or not. I really don't know.

CURWOOD: Why is this anniversary important, 20 years after?

VALENTINE: You know, we are all here. And we need to celebrate that. And I also think it's important that the world does not forget what happened here. And I think that we need to be remembering the potential for these kinds of things. When we move this kind of stuff into communities, we need to be more cognizant of the potential for disaster and for disruption to the lives of all the people who live here.

CURWOOD: Bonnie Valentine is a teen parent educator who lives with her husband and their 2 children in Middletown, Pennsylvania.