Reporter Clay Scott gives us an update on the continuing conflict over water in the Klamath Basin, located on the border of Oregon and California.

ROSS: Along the California-Oregon border, controversy continues over the waters of the Klamath Basin. Things came to a head during last year's drought when federal agencies cut off irrigation water to the area's farmers in order to help three species of endangered fish survive. The farmers protested for months. This year, there's enough water in the Basin, thanks to an above-average snowfall. But the crisis remains. President Bush has set up a Cabinet-level task force to help resolve the conflict. As Clay Scott reports, finding a solution won't be easy.

SCOTT: A lot of people have a lot at stake in the waters of the Klamath Basin, from the Klamath Indian Tribes of the upper basin, to the commercial fishermen 200 miles away along the Pacific coast. Thousands of people and dozens of communities depend on the water for their livelihoods. But, for many farmers here, the conflict still boils down to this: their right to irrigation water versus the Endangered Species Act.

Everywhere you go in the Basin, hand painted signs attack the ESA with slogans like, "Farmers Not Fish," and "Farmers are the real endangered species." One of the most vocal opponents of the ESA is farmer Steve Kandra.

SCOTT: Kandra is still angry at the federal wildlife agencies who, he says, put fish over farmers. But with President Bush's recent creation of a Klamath task force, he says he's optimistic that the needs of farmers will finally be addressed.

KANDRA: We finally have an administration that's engaged and has kind of moved us. We've become more visible. And, we're looking at trying to get some resources in the Klamath Basin to try to deal with some of these issues.

SCOTT: The Klamath task force is headed by Interior Secretary Gale Norton. Earlier this year, she asked the National Academy of Sciences to prepare a report on the situation. But instead of diffusing the crisis, the Academy's report has fanned the flames again. Their interim study concluded that there was no substantial scientific foundation for irrigation cutbacks.

They say the main problem was not the quantity of water, but the quality. Farmers say the report proves their water should never have been cut off, that irrigation is not the problem. But some environmentalists have called the Academy's findings oversimplified, inconclusive, and misleading. The low flows in the Klamath River, they say, raise water temperatures and expose salmon spawning beds. In the upper lake, low water levels, coupled with agricultural runoff, create massive algae blooms that also kill fish.

Bob Hunter, of the environmental group WaterWatch, says the pollution in the basin can't be separated from low water levels, that both result from years of mismanagement.

HUNTER: Whenever you have endangered species, it really means you have an environment in crisis. It means we've made so many changes and alterations to the natural habitat and ecology of the basin that things are now so degraded that we're losing species. 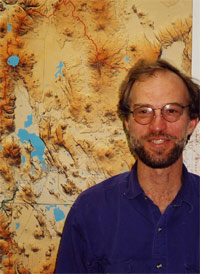 SCOTT: Two of the species at the heart of the controversy are the Short-Nosed and the Lost River Sucker. Both fish have great cultural and spiritual significance to the Klamath tribes. Until recently, the suckers were also important economically. But the fish numbers declined so much that the tribes stopped fishing for them in 1986 before they were listed as endangered.

Don Gentry, from the Tribal Department of Natural Resources, showed me where the suckers once came up the Sprague River by the thousands to spawn.

GENTRY: Every spring, this is where they would start catching the fish. And all through the river, you can see the shallower spots. And they built fish weirs or places where you have these old, old fish weirs where people actually stacked rocks on the natural ledges and rocks in the river. 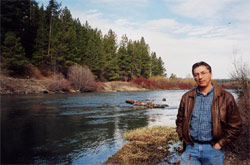 SCOTT: Gentry says he's hopeful that habitat can be restored, and that the fish will return. But, water management here cannot be reduced to a mathematical equation, he says. It has to be looked at as a whole, starting in the upper reaches of the watershed where years of intensive logging have weakened the ecosystem.

GENTRY: The forest management we've had in the past has changed the structure of the forests. So, the forests no longer capture and hold snow and release snow in the form of runoff as they did historically. So the whole hydro-graph of the basin has changed.

SCOTT: Now the Klamath tribes might get a chance to show that they are better stewards of the watershed than the forest service has been. In a surprising announcement a few weeks ago, Gale Norton said she will start discussions with the tribes on the possible return of nearly 700,000 acres of former reservation land. The move, she said, would be part of an overall strategy to develop a balanced solution for the Basin.

Meanwhile, a bill in congress could provide $175 million to help resolve the Klamath crisis. But, even if the bill passes, it's not clear how that money would be spent. Secretary Norton has pledged to give what she calls "certainty and predictability" to irrigated agriculture in the area. Environmental groups say the future of both farmers and fish will be in jeopardy without a long-range plan for reducing demand on the Basin's water.

SCOTT: For Living on Earth, I'm Clay Scott in the Klamath Basin.