Living on Earth's Maggie Villiger reports on the discovery of six new species of insect, so different from all other known bugs that a new classification order had to be created for them.

ROSS: Coming up, two wide-eyed biologists venture into the kingdom of the mountain gorillas. First, this page from the Animal Notebook with Maggie Villiger.

VILLIGER: Entomologists may be smiling, but entomophobics are cringing. That's because scientists have announced the discovery of several brand new species of bugs that are so unusual, a new insect order had to be created to classify them. The order is called Mantophasmatodea. And the first representative is a 40 million year old fossil encased in amber. 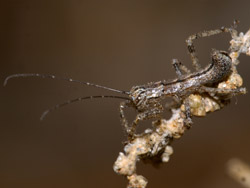 But researchers have also located members of five more Mantophasmatodea species that are actually creeping and crawling this very day in the remote Brandberg Mountains of Namibia in Southern Africa. Scientists call the discovery analogous to finding a living saber tooth tiger, or a woolly mammoth roaming some remote region. Entomologists say these newfound bugs are a sort of cross between a praying mantis and a walking stick, with powerful spiny legs that they use to grab and crush their prey. The carnivores are so voracious, some captured bugs were eaten by their companions on a trip back to Germany with the scientists. That might explain why the bugs have been nicknamed "gladiators." 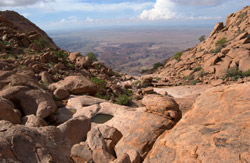 The "gladiator" insect was found in the
Brandberg Mountains of central Namibia.
(Photo: Piotr Naskrecki)

Researchers are setting up colonies in captivity to observe the way these insects feed, breed and develop. And conservationists hope to set aside the insect habitat as a protected biosphere reserve. That's this week's Animal Note. I'm Maggie Villiger.


ROSS: And you're listening to Living on Earth.