Gorillas in Their Midst

Think of mountain gorillas and the name Dian Fossey is probably not far behind. But others have devoted their lives to studying and protecting the rare primates. Now, husband and wife researchers have written of their years in the Rwandan mountains, working with, and sometimes in spite of Dian Fossey. Vicki Croke speaks with the authors of In the "Kingdom of Gorillas."

ROSS: In 1978, Peace Corps volunteers Bill Weber and Amy Vedder took off on, what they thought would be, the adventure of a lifetime. The two biologists were headed for the Volcanoes National Park in Rwanda to study mountain gorillas with, none other than, Dian Fossey, the world's most famous gorilla expert.

But when Weber and Vedder reached Rwanda, they found a gorilla population in trouble. And an even more troubled Dian Fossey. Their experiences are chronicled in the book "In the Kingdom of Gorillas." Vicky Croke spoke with the authors and prepared this report.

CROKE: For Amy Vedder, learning "gorilla" has been pretty easy. Almost from the beginning of her time in the Rwandan rainforest, she found she could mimic the massive animals who are, in general, very quiet. There is the deep and deeply happy belch of contentment, for instance.

VEDDER: And it goes [gorilla sounds].

CROKE: And the irritated, cough-like bark that serves as a warning. 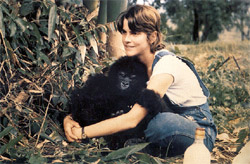 CROKE: Moments spent with the gorillas in the field were idyllic, but all too short. Whether they were rescuing the sick and orphaned, or carving out a safe place for all mountain gorillas, Vedder and Weber have truly battled the odds, finding opposition in some surprising places.

One of the first cases they took on was that of little Mweza who, in February of 1978, was taken from her family group by poachers. By the time the biologists reached the emaciated four year old gorilla, the wound from a wire noose around her ankle had turned gangrenous. They moved her to camp, and for eight days, nursed her round the clock.

VEDDER: We were just incredibly frustrated by the fact that there was no adequate treatment for an ill gorilla. There was help waiting down the mountain in the form of human doctors. But that help was being refused by Dian. And it was a terribly, terribly frustrating situation, to know there was a gorilla that might be able to be saved and there was no way to do it. And we watched her die a horrible death. And that, I think, was a really galvanizing point in our life, feeling that research was one thing, but we had to move as quickly as we could to action to try to save these animals.

CROKE: Vedder and Weber were seeing a deeply troubled Fossey, a woman far different than the one gracing the airwaves through National Geographic specials; a far darker personality than that eventually brought to life in the movie, Gorillas in the Mist. 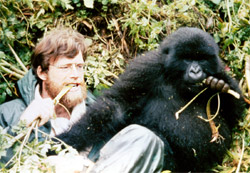 WEBER: By the time we came to know Dian, in the late '70s, she was probably a very different person than the woman who first came to Rwanda in 1967. And, I think a lot of alcohol, isolation, perhaps difficulty dealing with the fame that had been dropped on her, I think pushed her into mental illness. And I think it's difficult to sit back and judge someone and say "they're wrong, they're bad," when in fact what you're looking at is someone who is sick.

CROKE: The couple began to look at the big picture of conservation. But Fossey would have none of it, ultimately rejecting every proposal the two young field biologists brought forward. Primatologist Michele Goldsmith, a National Geographic scientist and a professor at the Tufts University Vet School, has also pondered Fossey's decline.

GOLDSMITH: I think that she was a perfectionist, and that this got in the way of her efforts and her daily frustration in trying to save the gorillas. I'm not sure if that's what led her to be an alcoholic. And I'm not sure what effect being an alcoholic actually had.

CROKE: But the effects were clear to Amy Vedder and Bill Weber. They realized they were on their own. Vedder was studying gorilla ecology to better understand what these animals ate, and how much of it they needed to survive. And Bill Weber was intrigued by the human part of the equation. How do you get desperately poor local people to care about the conservation of these wild animals?

WEBER: To be truly effective, you also have to learn about local culture, politics, economics. You have to go out and become a bio-diplomat, an advocate for their protection. And to do that often means leaving the park, going out and working with local villagers, getting to know government officials, whatever you may think of them, and trying to influence their thinking and their decision making so that they take actions in favor of conservation. In this case, to protect the gorillas.

CROKE: So, armed with some basic knowledge, the couple hatched a plan. Though the word "eco-tourism" hadn't yet been coined, the two biologists plumbed the concept in a bid to stave off government plans to make commercial use of the park for cattle ranching. Vedder and Weber claim they had a way to earn more money for the park. But, how could they be so confident that it would work?

WEBER: We invented the numbers. We knew how much they were estimating for revenue for the cattle project. And we came up with a higher number--3000 tourists, 25 dollars a day, apiece. That's 75,000 dollars. Bingo, we win.

CROKE: Wild gorillas have a tendency to run from the sight of human beings, even eco-tourists with deep pockets. So, Bill Weber hustled to habituate a group, training the gorillas to tolerate the visits from paying strangers. And, they had to habituate humans to the presence of gorillas. Here, in a scene from a National Geographic documentary, Amy Vedder quietly instructs a group of tourists about the etiquette of entering gorilla society.

[SOUND OF LEAVES AND BIRDS CHIRPING ON TAPE]

VEDDER: [Whispering] No real problem today. But we should stay close together. And we should speak quietly. And make sure--you're going to be excited--but be careful. Carry your sticks close to your bodies.

CROKE: When the couple first came to the park, visitors brought in a meager $7,000 annually. But by 1989, with the Mountain Gorilla Project in full swing, the park was making a million dollars a year. However, Tufts primatologist Michelle Goldsmith says, eco-tourism has been a double-edge sword for gorillas. They can catch human diseases. And, habituated gorillas tend to leave the safety of their park. But Goldsmith has no doubt about one thing.

GOLDSMITH: About 20 years ago, this population was being devastated by poachers and habitat disturbance. And, without the creation of tourism at that time, I think that we probably would have lost the entire population.

CROKE: In the late '80s, with the future of gorillas seemingly assured, Bill Weber and Amy Vedder returned to the United States where they're now both directors of the Wildlife Conservation Society. The rescue of this fragile population would be a sweet ending to the couple's shared story with gorillas. But history has added a few more unexpected chapters. As Amy Vedder continued to visit Rwanda in the early '90s, she saw signs of, what eventually would become, the brutal genocide of the Tutsi minority there.

VEDDER: We saw a downward spiral. But never expected the kind of explosion that took place in 1994 when the genocide and the cataclysmic war broke out.

WEBER: Turning those numbers into something personal was difficult. There are many people we worked with who are lost or disappeared. The one probably closest to us was Clementine.

CROKE: The nanny to their two children, a woman they considered a close friend, disappeared during the genocide. Amy Vedder again returned to Rwanda and tried to find her. The emotion of that time is still raw.

VEDDER: When I returned, I did look up her house and her family. I showed a picture of Clementine to her sister, who thought that that meant she was alive.

CROKE: Despite the fact that Clementine has never been heard from, Vedder and Weber find solace in one astonishing fact.

WEBER: The gorilla numbers have actually continued to increase from a low of 260 twenty years ago. The latest numbers from those working in the park, and particularly the guards who, at considerable risk, are going out and monitoring the gorillas, have come up with their best guess of around 355 gorillas.

CROKE: Gorillas are slow breeders. And a net increase of 95 over two decades is fantastic, especially considering the turmoil churning around these animals. Tourists weren't rushing back. But Amy Vedder felt compelled to. With the loss of so many of her friends, there will always be, for her, an unspeakable agony associated with her beloved land. And yet, there is also joy. When Vedder returned to Africa last year, one miraculous reunion awaited her.

VEDDER: I went back to see Pablo who, when I had left the research group, group five, he was the juvenile delinquent, four and a half year old who was always getting in trouble, pulling on our backpacks, causing all sorts of problems. And here he was a huge silverback. A massive animal. Still a little slack-jawed, like he used to be. He's still slightly crossed eyes, like he used to have. But here he was--the dominant silverback in a group of 44 animals in his family, the largest group ever known for gorillas. So, it was a really optimistic moment for me to see him in charge of this new family.

CROKE: The mountain gorillas of Rwanda survive in their tender and tenuous Eden, a place blessed by the hard work of two idealistic and tireless conservationists, and the commitment of the Rwandan people. For Living on Earth, I'm Vicky Croke.


In the Kingdom of Gorillas from Amazon.com.">