Fish Out of Water

According to the Palmer Drought Index, one-quarter of the nation is in a severe drought. Some states are asking citizens to curb their water use. And in the west, many states are on fire-alert. All over the country, rivers and lakes are at abnormally low levels. As Nancy Cohen reports from Connecticut, both fish--and those who catch them--are affected by the dry conditions.

CURWOOD: It’s Living on Earth. I’m Steve Curwood. And coming up: some people find them icky, and some people find them yummy. The eel is next. But first, many parts of the United States are experiencing abnormally dry or drought conditions. In the East, New Hampshire has declared a drought emergency and in Maryland, stream levels are the lowest ever recorded. Many states, including Connecticut, are asking citizens to conserve water voluntarily. But as Nancy Cohen reports from Connecticut, it isn’t only people who are affected by the shortage of water. It’s absolutely vital for fish.

COHEN: Imagine for a moment that you’re a fresh water fish. You’re covered with scales, breathing through gills, and, in a typical spring, your home would be brimming with chilly, deep water. Not this year.

HYATT: The water levels that are currently confined to a relatively small channel should be nearly twice as wide and, at least, a couple feet higher.

COHEN: Bill Hyatt of Connecticut’s Department of Environmental Protection is sitting on dry rocks that hug the edge of Salmon Brook in Glastonbury, a spot that, he says, would normally be covered with two feet of rushing, ice-cold water. 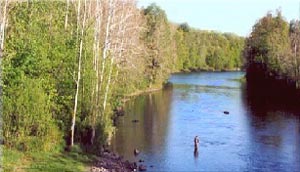 HYATT: What we’re looking at now are water levels that are far more typical for the very end of spring, the beginning of summer.

COHEN: Hyatt says if water levels continue to drop on brooks like this, fish may become more crowded and exposed. There will be fewer riffles in the water. Those are the places where the water tumbles over rocks, creating white water, bubbles, and oxygen—a good place for fish to hide from birds of prey lurking above, such as heron or osprey.

HYATT: Overhead cover, turbulent flow, are all types of habitat that provide protection from predators. And those will diminish greatly as the summer goes on and, in the case of a severe drought, will be almost non-existent.

HYATT: When the water temperature rises to a higher level than it normally is their body temperature goes up and their metabolism goes up, as well, and that requires them to start feeding and to remain active for longer periods of the day.

COHEN: Right now, the warmer temperatures are making fish hungrier and making them easier for fishermen to catch.

[SOUND OF CROW CALLING AND WATER]

COHEN: One of the best places in Connecticut to catch trout is the Farmington River. What makes this river so special is the constant flow of water from two reservoirs upstream. In a normal year the water is cold, making the river ideal for trout. David Goulet, owner of the Classic and Custom Fly Shop right on the Farmington is worried that come summer the drought could make the water flowing into this river too warm for trout.

GOULET: The reservoir won’t have sufficient depth to make the cold water. Instead of being 43 degrees it could be 50 degrees. So then, we have the natural warming. When we get into the warm weather we get these stretches of 80, 90 degrees. Evenings, we don’t get a cooling off period. So that heat starts to stay in the river, and we’ve never had that here. So we don’t know how our fish are going to react.

COHEN: Goulet pays close attention to fish behavior and especially to what they eat. Not only does he sell hand-tied flies to fly fishermen; he tracks the hatching of real aquatic flies, which make up much of a trout’s diet. This year, the flies are hatching early.

GOULET: We have one particular bug that’s seven weeks ahead of schedule. The problem comes when everything accelerates and we’re into June, when this bug should have came out, and is now in, out, gone. What happens in June?

COHEN: With all the flies hatching ahead of schedule, Goulet is afraid there won’t be enough food for the trout after June. And even if there are flies, the water could get so warm, trout stop eating. This could be an even bigger problem on rivers and streams that aren’t fed by reservoirs, were fish depend only on natural flows from rain, surface run-off, and ground water. If the water gets too warm, fish will live off their body fat and even their eggs, which could hurt reproduction.

GOULET: When you start getting up into the 70 degree range they become lethargic. It’s overwhelming their body, it’s taxing their body. They probably don’t want to feed. They don’t feed, they’re getting skinny. They get skinny, they’re losing body weight, they’re getting themselves in trouble. When you get up to 80, it’s lethal. They die.

COHEN: But right now, fishing is good. Conditions are typical of those later in the season.

[SOUND OF BIRDS AND WATER]

COHEN: On a recent evening, a handful of people dressed in waders tested their skill against the fish. Standing waist deep in the Farmington River, they flexed their fishing rods back and forth overhead. Their lines dance in the air and land gently on the water. Jon Vaughn hooks a fish and slowly reels it in before letting it go. He’s one of the many fishermen who enjoys the sport of fishing, but doesn’t take home his catch.

BLAIR: What did you get?

VAUGHN: It’s a rainbow trout. Pretty good looking fish, nice and healthy. Still got some energy in it.

COHEN: Just upstream, fishing guide Marla Blair describes fishing on this river as heaven on earth, but she’s worried the season could be cut short this year.

BLAIR: My joy is to see people catch fish. I may not be able to make that happen. If this water warms up to the point where the fish will get stressed if my clients fish them, I can’t have them on the river.

COHEN: For now, though, the fish are jumping. But many share Blair’s concerns. Some biologists predict that if we don’t get a heavy dose of spring rain this could be a tough summer for fresh water species. For Living on Earth, I’m Nancy Cohen on the Farmington River.