Author Richard Schweid traveled the world in search of the mysterious and much-sought-after delicacy of the eel. Host Steve Curwood talks with Schweid about the fruits of this search, and about his new book, "Consider the Eel".

CURWOOD: Some people travel the world for adventure, for fine food, or just the thrill of it. Author Richard Schweid found all three when he hit the road in pursuit of something most people would rather avoid: the eel. From the Sargasso Sea to the rivers of Spain and beyond, Mr. Schweid follows the slithery fish and writes about his experiences in his new book, "Consider the Eel." He says his discoveries about this humblest of creatures have inspired a sense of wonder and mystery and also made for some really great eating along the way. Richard Schweid, welcome to Living on Earth.

CURWOOD: Why did you yourself decide to consider the eel? What was the experience that, pardon me, hooked you?

SCHWEID: It trapped me, actually. I was out with a guy in sort of an inland, marshy lake down below Valencia, and the guy trapped some eels as part of the way he made his living. And he trapped one the morning I was out with him in his boat. And he took us back to a cafe in town and went in the kitchen and cleaned the eel—which was nice of him to do—and cooked it for us. And when he served it to us he said, "You know, it’s an amazing thing. An eel is just an incredible animal." And we said, "Well, it tastes pretty good. What else is so amazing about it?"

And he told us the story of how all eels come from the Sargasso Sea, that very deep sea in the Atlantic Ocean between Bermuda and the Azores, and he told us the story of how they all came thousands of miles and then came into the rivers of Europe. And I thought to myself, "This is one of the most gullible people I’ve ever met in my life. This is the most ridiculous story I’ve ever heard," and we went on about our business. And later I found that he had it exactly right.

CURWOOD: What’s the biggest mystery you found about eels?

SCHWEID: Well, the biggest mystery is, without a doubt, how does an eel maintain such an odd lifestyle? All those eels are born in the Sargasso Sea and there the currents carry them either to the rivers of North America or the rivers of Europe. And then some 15, 20, 25 years later they turn around at some signal that nobody knows what it is, and go back to the sea, and they stop eating once they hit saltwater. They go down the river and they jettison their entire digestive apparatus, and their eyes open up so that they can see down in the depths of the sea. And they go through all these changes and then they swim down to the Sargasso, where, theoretically, they mate and they die.

CURWOOD: We don’t know how they replicate themselves?

SCHWEID: The scientific theory that eels reproduce at depths in the Sargasso Sea is— the only evidence we have for that is that the larvae that have been found on the surface of the Sargasso are so small, so infinitesimally small—five millimeters—that they had to have been born close by. And, of course, we have observed eels coming back down the river and going into the sea. But what happens to them once they get into the sea, no one’s ever seen and no one’s ever been able to track them. A considerable amount of money has been spent with sophisticated sonar-equipped ships trying to track adult eels as they head out into the open Atlantic and, to date, no one’s ever been able to even get close. They lose them about as soon as they get them.

CURWOOD: By the way, the eels we’re talking about are fresh water eels.

SCHWEID: These are fresh water eels.

CURWOOD: These aren’t the big guys, the morays and the electric fellows that you can find deep in the ocean?

SCHWEID: No, these are the eels that you might—many a fisherman living fairly close to the east coast might think that they’d gotten a good fish when they get a pull on their line and they reel it in. And much to their horror, it’s an eel. This is the kind of eel we’re talking about. It might live in a lake or a pond or a river near you.

CURWOOD: Now, I’m wondering. You’ve been studying the life cycle of eels for quite awhile. What observations or comparisons might you make between eels and us humans?

SCHWEID: I’d say eels have got all the good. We had all the bad. It’s much better to be an eel, Steve.

SCHWEID: I think so because, look at it this way. We have a pretty monotonous life. We keep the same form. Although we grow we keep, more or less, the same form for our whole lives, whereas an eel begins as a larva, a tiny little leaf out in the middle of the great Atlantic Ocean. So it finds fresh water and its body transforms into a thin, transparent ribbon which then grows over the course of years into, what we know as, an eel. So anyhow, that’s my general take on it. I think humans have got kind of a raw deal, really. I think the eel got all the best of the evolutionary process.

CURWOOD: One of the things that you key into your book is that the eel population is declining. What are the threats to eels and why are they particularly vulnerable?

SCHWEID: Changes in oceanographic temperature may be having some effect on the number of eels that hatch out and the number of viable eels that manage to make their way across the ocean to fresh water. And then again, there are some places in Europe, for instance, where there is a certain market for the elvers— for the very tiny eels that are just coming from the saltwater into the fresh water—and they can be sold to Japan directly or they can be sold to China because the Chinese are investing heavily in raising eels to marketable size to sell to the Japanese. So that there are years in which when the Japanese eel recruitment is down the Chinese buy their eels from the Europeans— their little babies. And there are years in which tiny eels have been worth more per kilo, say, than heroin.

CURWOOD: Now, all this to consider the eel. If you ask most Americans to eat eels, well, they probably wouldn’t— right? But what about the eel market in other parts of the world? Who really likes these creatures?

SCHWEID: Almost everybody else likes them. Everywhere that they appear, they’re eaten with great avidity. It’s only in the United States where eel is not consumed so much and that was one of the reasons that I really wanted to consider the eel myself. And many, many people in the United States ate eel right up until the mid-nineteenth century. And after the Civil War it began to decline until the consumption of eel has essentially evaporated and disappeared. 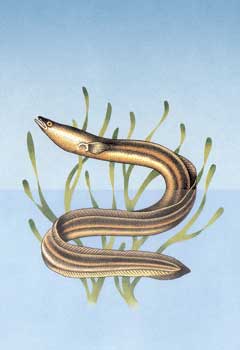 CURWOOD: You write that in Spain, chefs there prepare baby eels called elvers, or I guess in Spain the word is "angulas," in a special way. Can you read a little from this, please?

SCHWEID: Sure. Glad to. "No one is certain just who is the first to stop throwing the angulas to the pigs and begin tossing them in a frying pan instead. Angulas a la Vizcaina are elvers flash-fried in cold-pressed, extra virgin olive oil, and served in an earthenware bowl with minced garlic and a pepper with a mild sting called a "guindilla." They’re served while sizzling hot and are eaten with a wooden fork, because a metal utensil might burn the diner’s lips. On the menus of San Sebastian’s Restaurants, the price of one can reach $70 or $80 a serving during the season, each serving a quarter of a pound. They’re quite tasty, like a slightly grainy pasta with a tiny crunch in the backbone and a faint aftertaste of fish and garlic, along with the guindilla’s light bite."

SCHWEID: Well, I have to say that I tasted them all in the line of duty, you know. I tasted them and the chef insisted that I have it and that he wasn’t going to charge me for it.

SCHWEID: Well, I tend to go along with the Dutch and German. Smoked ell, to me, is just delicious. I like eel sushi. And I like all kinds of eel, really. I’ve never eaten eel that I didn’t like at all. My least favorite was probably jellied ell, which is something they still eat in great quantity in London, which is simply chunks of eel in gelatin, served usually in a styrofoam paper cup like you’d get a cup of coffee-to-go in, and then you put either regular vinegar or hot vinegar on top of that. The English love it, particularly in London’s East End. It used to be one of the favorite foods. But I didn’t find it particularly tasty.

CURWOOD: Richard, tell me, what surprised you most doing the research about eels for this book?

SCHWEID: Well, I think the biggest surprise to me was the fact that so many people have spent so much time and so much money trying to understand, what seems to be, such a humble and basic animal. And with all of that effort and energy and expenditure, people still know next to nothing about the eel.

CURWOOD: Richard Schweid is a journalist and author of "Consider the Eel." He spoke to us today from Barcelona, where he’s senior editor of Barcelona Metropolitan, a magazine. Richard, thanks so much for taking this time with me today.

SCHWEID: Thanks very much for having me. It’s been a pleasure.


"Consider the Eel" by Richard Schweid">