Farms across the United States are disappearing. Farmers are aging and land is being swept up by developers. A program sponsored by the Department of Agriculture aims to keep young people interested in farming with low interest loans to start their own businesses. Susannah Lee reports.

CURWOOD: Across the nation, farm land is disappearing as farmers age and tough economic times for family farms mean more and more crop land is being sold off for development. But a program sponsored by the U.S. Department of Agriculture is trying to keep young people interested in farming. It makes low interest loans available to kids with viable income producing projects. In New England, the number of applicants has been relatively small. But as Susannah Lee reports from western Massachusetts, this loan fund has given some young people a leg up in starting their own businesses. 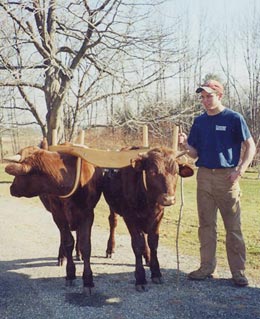 LEE: Josh Sampson is an industrious 17-year-old who loves working with oxen. He shows them in county fairs, rents them out for cart rides, and uses them to haul wood, a business he’s in with his father. Today he’s using his pair of Holstein steers for logging. Many of the logs weigh a ton or more.

LEE: These huge oxen weigh over 2,000 pounds each and, as Sampson points out, getting them around isn’t easy. So he looked for ways to buy the shiny red livestock trailer he uses to transport his animals.

SAMPSON: It’s a Bonanza trailer, and it’s just regular, plain Jane. Nothing fancy. Don’t want to be too fancy. It costs more money when you get that fancy.

LEE: Because he was under 21, Sampson couldn’t go to a commercial lender so he turned to the USDA’s Farm Service Agency for a Rural Youth Loan—- low interest loans currently available to any youth ages 10 through 20 who live in communities of less than 10,000. Jim Radentz is director of loan making for the Farm Service Agency. He says that nationwide they make over 2,000 loans annually.

RADENTZ: The objective of the program is really instructional: to give young people an opportunity to have some responsibility. Because all of the projects they would undertake through the program would involve running and operating some kind of enterprise, perhaps, on their own or caring for some animals that they may have purchased to raise.

LEE: The limit for a youth loan is $5,000. Applicants must have a sponsor from an organization such as 4-H or a vocational or tech school. And together with the local Farm Service Agency, a realistic business plan and payment schedule is worked out. With his $3,500 loan Josh Sampson bought the new trailer and acquired instant business savvy, as well.

SAMPSON: Well, right now my payment’s only $50 a month or $54 a month, so I’ve just been sending $110 because I have the money and it’s easier and quicker to get paid off. So then I don’t have to pay as much on interest.

LEE: As the USDA website video indicates, the Rural Youth Loan Program is one way the government attempts to support and promote a vanishing agricultural way of life.

VIDEO: Across rural America, the trend toward fewer farms and older farmers and ranchers continues. Small towns still look for ways to keep their young people from migrating to cities for employment. And farming and ranching families work to keep their traditions alive. But a U.S. Department of Agriculture program is making a difference.

LEE: Loan periods can range from one to seven years. Nationwide, about 6,000 Youth Loans are currently on the books, with states like Arkansas and Kentucky topping the list with over 500 loans each. Here in New England, agriculture is smaller in scale than the rest of the country, but John Devine, the Farm Service Agency’s executive director for Franklin County, Massachusetts, says that shouldn’t discourage young people with an eye for opportunity.

DEVINE: I think one of the advantages of the Northeast, or more specifically Massachusetts, is that there’s a really diverse ag population here. And we’re very nearby either urban or suburban areas that there’s a need, especially for fresh produce.

LEE: Ryan Voiland took advantage of that opportunity early, taking out a Youth Loan while just a sophomore in high school.

VOILAND: I believe that the very first loan I took out was probably for about one to two thousand dollars, and I think, if I remember this right, that that was exclusively to finance a new walk-behind roto-tiller.

LEE: The roto-tiller was followed by a Youth Loan for greenhouse materials, and later loans for more vegetable production equipment. Now, at the still tender age of 23, Voiland has purchased his first farm, 50 acres, and is on h is way to becoming a significant supplier of organic product to area markets. With his profits, Voiland is able to afford increasingly sophisticated equipment such as a vacuum lettuce seeder.

VOILAND: Now I’m going to roll around the lettuce seeds, trying to fill up every hole.

LEE: Most applicants for Youth Loans are dedicated and self-directed like Voiland. But Red Fire Farm, as his operation is called, might not have happened so early in his life without the initial support of the Rural Youth Loan Program.

VOILAND: I don’t know if I would have been able to grow my business as successfully or as quickly.

LEE: So it may be surprising that these loans are seemingly under-utilized in New England. Carrie Novak is chief of the Farm Loans Program for Massachusetts, Connecticut and Rhode Island. She says only five loans were made in these three states during the last fiscal year.

NOVAK: You could say it’s under-utilized. However, because a 10 to a 20 year old can borrow money legally under this program, this should be something that is really well thought out.

LEE: But Novak believes that restrictions which limit loans to individuals living in towns under 10,000 should be re-evaluated.

NOVAK: In the Northeast where we’re fairly high populated, we have a lot of kids that are interested in agriculture and would do some really good agricultural projects, but they live in a town of a higher population than 10,000. And I really would like someone to take a look at that and maybe up the population so that kids in a little bit more urban areas could be eligible for the program.

LEE: And according to director of loanmaking Jim Radentz, this will probably be a reality some time in the next year.

LEE: Back at the farm, Josh’s father, Ron Sampson, is proud of his son’s desire to work on the land.

SAMPSON SR: Oh yeah. I’m really enthused about it, just for the appreciation for the land and working in the woods with the oxen. I hope he enjoys it and carries on with it. I’ll back him up, whatever he does.