The Bush administration is poised to drill tens of thousands of coalbed methane wells in the Powder River basin area of Montana and Wyoming, but critics, including the EPA, are charging that the federal environmental impact studies for the proposed gas drilling are inadequate.

CURWOOD: Welcome to Living on Earth. I’m Steve Curwood. The Powder River flows north from Wyoming into the Yellowstone in Montana. The region is popular with tourists who come to take in the breathtaking views of the Bighorn Mountains. But these days, the Powder River Basin also attracts drillers who want to tap one of the nation’s largest natural gas reservoirs.

The federal Bureau of Land Management holds the rights to these deposits and is set to let industry begin drilling tens of thousands of methane wells there. But critics, including the U.S. Environmental Protection Agency, say the BLM is ignoring the project’s long-term consequences. Eric Whitney of High Plains News reports.

WHITNEY: Another natural gas well is being drilled into the scrubby tan soil of the Powder River Basin in Wyoming. These drillers are using a relatively new technique to harvest gas. It’s been known for decades that the massive, shallow coal deposits here contain a lot of methane, a form of natural gas. That gas is trapped in the coal beds by groundwater.

In the late 1980s, drillers discovered that pumping the water out freed the gas, which they could then collect and sell to an energy hungry public. 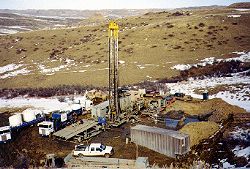 WHITNEY: The Bureau of Land Management is endorsing a plan for 80,000 wells in the Basin that would, over the next two decades, pump up close to three trillion gallons of groundwater. That’s enough water to cover Connecticut and Rhode Island a foot deep.

WHITNEY: Roger Mugli is a farmer and feed processor near Mile City, Montana. He also runs this local irrigation system.

MUGLI: So when you open those head gates, the water comes over the top of that, and passed in there. Well, right ahead of that wall is an outlet that takes the sand and dumps it into the river.

WHITNEY: Irrigators, like Mugli and environmentalists, say the BLM doesn’t know the long-term consequences of coalbed methane wells bringing so much water to the surface. And, ironically, even in the middle of the worst drought in decades, farmers think disposing the excess water in local rivers and streams is dangerous.

MUGLI: It’s so laden with salts, sodium bicarbonate mainly, and that just does not work to irrigate crops. And pretty quick, the soil will start to collapse and then you don’t grow anything. No water will get into it, and no air and, therefore, no plant growth whatsoever.

WHITNEY: At this point, just over 200 coalbed methane wells are discharging wastewater into one Montana river. If government plans for development go through, more than 18,000 wells would discharge into three more. Mugli thinks that would be the end of irrigated agriculture in this part of the state. He’s already seen changes in the soil he tills.

MUGLI: You see the cracking? As it dries out, the moisture evaporates, and the salt isn’t going to evaporate. So there you have it. It turns that white.

WHITNEY: A couple of hundred miles south, in Wyoming, the water is less salty. But ranchers here are already seeing prime grazing land flooded. Looking for help, farmers and ranchers took the unusual step of joining with environmental groups to ask the BLM to slow the pace of drilling until the environmental effects could be better addressed.

Tom Darin is the staff attorney for the Wyoming Outdoor Council. He says it’s not just water quality that will be affected.

DARIN: The wells in the Powder River Basin are going to require, in this eight million acre area, 17,000 miles of new roads, 20,000 miles of pipelines, 5,300 miles of overhead power lines.

WHITNEY: The coalition told the BLM it wants water treatment made mandatory in sensitive watersheds. It’s also calling for drilling techniques that would minimize impacts to the environment, ones endorsed by President Bush’s own energy plan. But Darin says his group’s input was ignored when the BLM released two environmental impact statements a couple of months ago.

DARIN: BLM can study this if it wants. But, if it does a poor study, then it really hasn’t done its job.

WHITNEY: The Environmental Protection Agency agreed. The Agency told the BLM that its environmental analyses of drilling projects, on both the Montana and Wyoming sides of the basin, are insufficient and make unsupportable conclusions. The EPA urges BLM to do significantly more study, and to rewrite its analyses.

Gary Davis is the President of a local coalbed methane company. He says industry can be trusted to develop responsibly and feels that drillers are being held to an impossible standard.

DAVIS: We can’t have the kind of development, the engine for our economy, the ability for people to build large new houses, and heat and light them, and drive vehicles, and have no impact at all. As long as we’re dependent on the fossil fuels for those things, there will be a price that we have to pay.

WHITNEY: But Wyoming Outdoor Council’s Tom Darin says that unless BLM rewrites its environmental studies to be more realistic about development’s price, it’s leaving itself open to legal challenges. That’s already happened. In April, a federal appeals board revoked three drilling leases issued by the BLM, saying the agency had failed to adequately study their impacts.

DARIN: They’re sitting on a time bomb of when and at what point will someone come into federal court to try to invalidate their leases.

WHITNEY: The BLM says it’s working with the EPA to address that agency’s criticisms. But, the BLM is under pressure to open new methane gas production here this fall. Industry is already complaining of delays. So a major rewrite of the environmental impact statements appears unlikely.

WHITNEY: Whether or not drilling in the Powder River Basin turns into a federal legal battle, what happens here will reverberate up and down the Rocky Mountains. Proposals to drill tens of thousands more similar wells are pending in New Mexico, Colorado and Utah as well. For Living on Earth, I’m Eric Whitney in Gillette, Wyoming.