New Mexico, like most of the southwest, is suffering its third year of drought. And people are fighting over who owns the rights to the water. But as Ken Shulman reports, the thirst for water is nothing new in this arid state.

CURWOOD: Whiskey is for drinking, and water is for fighting. Or so the saying goes in the American West; especially in periods of drought like today’s. Three years of subnormal snow and rainfall in the Southwest have turned cities, states, and advocacy groups into bitter contenders, scrapping over a shrinking water supply. Ken Shulman has this report from New Mexico.

SHULMAN: Corky Herkenhoff rides on the back of a tractor as a worker seeds one of his fields. Herkenhoff is a third-generation farmer in San Acacia, New Mexico, a desert region about 60 miles south of Albuquerque. His 700-acre property looks like a fuzzy green carpet sample, sewn onto a stretch of dusty burlap. Herkenhoff’s primary crop is alfalfa that he sells to local dairies.

HERKENHOFF: A stand of alfalfa can last you anywhere from about six to ten years. But it also costs about $200 an acre to establish a stand of alfalfa. And if we were to plant it now and to run out of water in 30 or so days and lose that investment, it’d be a little hard to get back.

SHULMAN: Herkenhoff’s water worries are very real. He gets his irrigation water from this 1938 diversion dam on a section of the Rio Grande that borders his property. 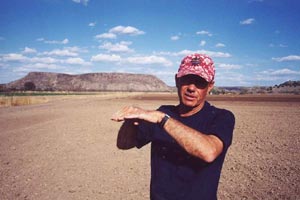 SHULMAN: The tan, trim, 61-year-old farmer smirks beneath his baseball cap, then turns and gestures towards the bare mountains to the north. It’s been a bad winter for skiers, he says. And that means a bad summer for farmers.

HERKENHOFF: Normally, we’d have, at this time of the year, probably 3000 cubic feet per second going by the dam here. And right now, I’d guess we’ve got less than 100.

SHULMAN: And as New Mexico water dwindles, the number of people using it continues to grow. There were fewer than 200,000 people living in New Mexico when Herkenhoff’s ancestors moved to San Acacia at the turn of the 20th century. Today, the state counts nearly two million inhabitants. Right now, 85% of New Mexico’s water goes to agriculture. But most New Mexicans don’t farm these days. They live in cities like Santa Fe, or in suburban developments, drawn by the climate, by cheap real estate and by the abundant rainfalls of the 1980s and ‘90s.

But take a walk along the Santa Fe River in downtown Santa Fe, where the only audible flow is the flow of traffic. Residents of the city are trying to conserve water by putting bricks in their toilets. They watch as their lawns turn from green to brown.

Tom Turney is state engineer for New Mexico. He says that the current drought shouldn’t come as a surprise to anyone.

TURNEY: A lot of people thought that it was just unlimited amounts of water. There were a lot of people that came here from out of the state and they didn’t realize that this state is basically a semi-arid state.

SHULMAN: Historians, geologists and scientists will tell you that drought is a natural and recurring phenomenon in the Southwest. So too, it appears, is migration. And there’s evidence of this just 20 minutes south of Santa Fe.

SHULMAN: San Cristobal Pueblo is an abandoned settlement in the Galisteo Basin, just off the old Las Vegas Highway. In the 13th century, a severe drought to the north drove the Tano Indians here. For the next 300 years, an unusually favorable climate allowed the Tano to plant corn. Then, the rains failed.

Eric Blinman is an archaeologist with the Museum of New Mexico. He says these Tano petroglyphs were meant to bring rain.

BLINMAN: In one particular almost poignant case, a corn plant has been carved into the rock face directly above a sandstone pool that collects and holds water after every rain and can hold water for weeks.

SHULMAN: Neither the Tano petroglyphs, nor the Tano faith, could keep the Galisteo waters from drying up. Weakened by drought and famine, the Tano were left exposed and vulnerable when the Spanish conquered the area in the 16th century. 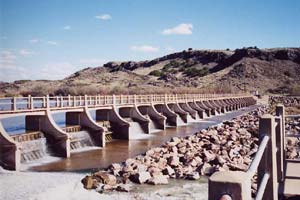 Dam on the Rio Grande.

Blinman acknowledges that modern technologies, like dams and reservoirs, provide cities like Santa Fe a survival buffer that the pueblo dwellers didn’t have. But he worries that contemporary New Mexicans may be just as vulnerable to a period of extended drought as the Tano were.

BLINMAN: In fact, when you look at Santa Fe’s history in a contemporary landscape, there was more stability laid out in front of us a millennium ago than there is in Santa Fe today.

One of these suits, Minnow vs. Martinez, could force New Mexico to release stored water to help preserve the endangered Rio Grande Silvery Minnow. If this happens, municipalities, industry and especially agriculture will suffer.

Stephen Farris is director of the Environmental Enforcement Division for the New Mexico Attorney General. He says water is the fastest lawsuit in the West right now.

FARRIS: When I first became a water lawyer, nobody, even in New Mexico, they didn’t really know what it was. Now everybody knows what a water lawyer is, and it seems like every lawyer claims to be one. But it’s because of its increasing economic importance, I think. And that has come about because there’s increasing demands, both human demands and environmental demands. But there’s no more water.

SHULMAN: Back at San Acacia, Corky Herkenhoff operates a diesel-powered bale lifter, hoisting eight bales of alfalfa hay onto a customer’s flatbed truck. Like most farmers, Herkenhoff has senior water rights. When water is in short supply, these rights give him priority over other users. And he’s not willing to give up those rights, to anyone, for anything.

SHULMAN: It’s possible, but not very likely, that New Mexicans will have to choose between farming, fauna and flushing. More likely is that state authorities will have to be increasingly creative in managing their water. They’ll also have to be more vigilant. Until now, no one has ever monitored the amount of water that farmers like Herkenhoff draw from the Rio Grande. Unless it rains, and rains heavy, they’ll probably start counting every drop. For Living on Earth, I’m Ken Shulman in San Acacia, New Mexico.