Blowin’ in the Wind

Last year, Texas erected more wind turbines than have ever been installed in the entire U.S. in one year. John Ryan takes a look at why wind power has expanded so dramatically in the Lone Star state.

TOOMEY: In Great Plain states like Oklahoma, wind is a fact of life. The skies give rise to dust bowls, twisters and even song lyrics. Yet this region, sometimes called the "Saudi Arabia of wind," captures little of the energy that blows across its prairies and fields.

Oklahoma may be the only state whose official anthem salutes the wind. Yet it has no commercial wind power projects. But just to the south, Texas has ushered in the biggest explosion of wind power the nation has ever seen. John Ryan explains why it’s taken off in the Longhorn State, but won’t be coming to Oklahoma anytime soon.

RYAN: Oklahoma is known for two kinds of energy; oil and wind. Even along the runways at the Oklahoma City Airport, horse head shaped oil derricks bob up and down like giant steel robins hunting for worms, rhythmically slurping up the state’s declining supplies of oil.

RYAN: And you can’t drive down a road in the western half of the state without seeing old-fashioned water pumping windmills spinning like rusty pinwheels in the breeze. Mike Bergey runs Bergey Wind Power of Norman, Oklahoma, the world’s leading manufacturer of small wind turbines. He says Oklahoma isn’t doing much more with its wind than it has for the past century.

BERGEY: The question we get all the time is, "We have so much wind in Oklahoma, why aren’t we doing something with it?" People just can’t understand why we’re not developing our wind resources with the large commercial facilities, and why they don’t see more residential systems and farm systems. My company, for example, ships 99% of what we build out of Oklahoma. And, it would be nice to have more of a local market.

RYAN: Oklahoma gets most of its electricity cheap from old coal-burning power plants that have never been required to install smoke stacks scrubbers. Though the cost of wind power has dropped, it still can’t compete where electricity prices and government support for renewable energy remain low. 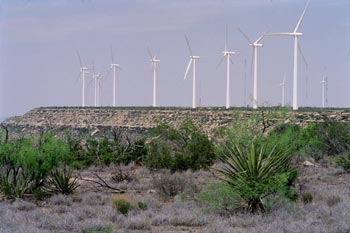 RYAN: Across the state line in Texas, the wind blows just the same. Yet, the two states’ experience with wind could hardly be more different.

HAMMOND: You can safely say that this is the largest concentration of wind power in the world.

HAMMOND: This land has traditionally been used for sheep farming, cattle raising, and in the oil industry. The turbines don’t prevent any of that from occurring. As a matter of fact, you can see some cattle and sheep out there right now.

RYAN: Hammond leads me along a muddy road on top of King Mountain, and points out the hundreds of wind turbines stretching as far as the eye can see.

HAMMOND: Right now, as we’re walking between these two rows of turbines, we can see that about 120 of them are turning.

RYAN: Each turbine stands as tall as the Statue of Liberty, with three propeller blades slowly sweeping a diameter, bigger than a 747’s wingspan. But with no trees or buildings around, it’s hard to get a grip on the scale of this Oz-like landscape of smooth white towers climbing into a ceiling of storm clouds.

The 214 turbines on King Mountain generate enough electricity for more than 100,000 households. Yet, as Guy Hammond points out, the turbines take up only a tiny fraction of the land on this mostly empty mesa of mesquite and creosote shrubs.

HAMMOND: What’s keeping us from building more, in this particular area, is the electrical transmission facilities are at their capacity, and they need to be expanded so that we can build more. But, obviously, if you look around, there’s a lot of room on King Mountain even. So, the potential is here for a lot more.

RYAN: McCamey is only one of several spots in West Texas where wind farms have popped up almost overnight. Three years ago, Texas was dead last in the nation in its percentage use of a renewable energy. In 2001, Texas installed more wind power than the entire United States had built in any prior year. The West Texas wind rush was spurred, in large part, by forces a few hundred miles to the east, in the state capital of Austin, and in smoggy metropolises like Houston and Dallas.

RYAN: In 1999, when Texas decided to deregulate its electricity markets, it required power providers to add renewable energy to their portfolios as one way to reduce the power plant pollution choking the state’s biggest cities. The deregulation law also set up the nation’s first system of renewable energy trading credits to enable electricity generators to squeeze out the most clean energy at the least cost.

Mike Sloan is president of Vertus Energy, a renewable energy consulting firm in Austin. He says the industry’s response to the law has been dramatic.

SLOAN: When they were forced to look at renewable energy, they looked at it and said, "Wow, this is a pretty good deal. Let’s go ahead and get more." So they really stocked up on it. And that’s why we have 900-plus megawatts that went on the ground when the requirement in 2003 is only for 400.

RYAN: By mandating large investments in clean energy, while letting market forces guide those investments, the state helped to quickly bring down the cost of generating wind power. Tom "Smitty" Smith directs the Texas office of the watchdog group, Public Citizen, which helped push through the renewables policy.

SMITH: The key lesson that we have learned here is that if you require enough renewables to be built, the price drops dramatically. And very quickly, it becomes cost competitive with other resources. And so, just as Henry Ford found out in building the Model T, the economies of scale do kick in relatively rapidly. And, the price has plummeted over the last several years as a result.

RYAN: In Austin, music is as big as politics. It comes as no surprise that consumers, as well as politicians, have embraced wind power in this hip, alternative-friendly town. Under the City Utilities Green Choice Program, about 7,000 Austin households have signed up to purchase alternative energy, prompting what the U.S. Department of Energy calls the biggest chunk of consumer-driven green power construction in the country. Roger Duncan of Austin Energy was in charge of setting up the program. He says it taps into Texans’ pent-up desire to clean up their state’s thick urban smog.

DUNCAN: A lot of our customers want to contribute to cleaner air and reduction of pollutions from the energy system by subscribing to renewables.

RYAN: What’s more surprising are the polls throughout Texas that show strong support for renewables. Duncan admits, it may seem strange that the home state of Enron, Exxon and famous oilmen, like President Bush, is turning to the wind.

DUNCAN: It certainly seems ironic. But wind is a big natural resource in Texas. There’s as much wind potential here as there is oil and gas. And, just as the first wildcatters dug wells and hit the mother load of oil, we have the modern day wildcatters in West Texas who are finding wind fields that are rich and profitable.

RYAN: Renewable energy advocates in the United States and abroad have closely watched the developments in Texas, which consumes more electricity than any other state. Oklahoma law- makers and the U.S. Senate both modeled renewable energy bills this year after the Texas approach. The Oklahoma bill was soundly defeated in March. And the National Renewable Standard passed the Senate in watered-down form. But Mike Bergey of Bergey Wind Power remains optimistic about wind in Oklahoma.

BERGEY: It’s an oil and gas state, just like Texas is. But people know that the oil and gas business is on the decline. Texas, in particular, where their leadership comes from, is starting from the standpoint that we’re an energy exporting state, and we’re going to stay an energy exporting state no matter what it takes. Oklahoma hasn’t quite gotten there to that sort of a viewpoint. But they’re getting there. And, I think we’ll follow in Texas’s footsteps eventually.

RYAN: If Bergey is right, the slow twirl of giant propellers may come to replace the lazy bobbing of oil derricks as the most familiar icon of energy production in the American Heartland. For Living on Earth, this is John Ryan in Oklahoma.

[MUSIC UP AND UNDER: [Oklahoma Players, "Oklahoma! Theme," OKLAHOMA!]