Backyard stargazers have been charting the skies for years, looking for the farthest reaches of the galaxy. Now technology has improved such that amateurs can see into space almost as well as professional astronomers. Host Steve Curwood talks with Tim Ferris, author of "Seeing in the Dark: How Backyard stargazers Are Probing Deep Space and Guarding Earth from Interplanetary Peril".

CURWOOD: The astronomy world was recently abuzz with news of a possible new planet on the other side of Pluto. It's about half the size of Pluto and it's the largest object identified in the solar system since the 1930s. The new planet is called Quaoar. It's a major discovery, not for the world of professional astronomy, but for the countless amateurs who are helping to advance the knowledge of the cosmos from their own backyards.

Writer Tim Ferris knows the culture and contributions of amateur astronomy intimately. He's an amateur himself, and has written several books, covering everything from the Big Bang to the search for the edge of the universe. His new book about the current revolution in amateur astronomy is called “Seeing in the Dark: How Backyard Stargazers are Probing Deep Space and Guarding Earth from Interplanetary Peril."

I met Tim recently at the cavernous and echoey recesses of the Harvard Smithsonian Observatory where he explained exactly what backyard stargazers are looking for.

TIM FERRIS: We know that the earth has been struck repeatedly in its history by objects large enough to cause catastrophic damage; in some cases, extinction of more than 90 percent of the species on land. And so it makes sense as an insurance policy to complete a census of the asteroids that are out there, and see if any threaten to strike us in the future. If they do, then it should be possible to move them to slightly different orbits so that the danger is avoided.

About half of the potentially dangerous asteroids have been discovered, we think, so half the task remains and amateurs have played a very useful role, both in discovering them and in helping to refine their orbits.

CURWOOD: What kind of near-misses do we know about?

FERRIS: Well, it depends on what you call a near-miss. You know, there was a kilometer class asteroid, an asteroid about 800 meters in diameter that flew by just a few weeks ago, not much further away than the moon. A kilometer-sized asteroid could destroy a city and render an entire state essentially uncivilized for a period of decades. A ten-kilometer class asteroid could extinguish the human species.

CURWOOD: Piece together for us, if you would, a representative composite of today's amateur astronomer.

FERRIS: I can't do that because there are so many different sorts of people. There are amateur astronomers who are into stargazing for the aesthetic rewards. They enjoy the beauty of seeing galaxies and nebulae, rings of Saturn through a telescope. And then there are amateur astronomers who are out to make a contribution to science, do serious scientific research in fields like discovering super novae, exploding stars and other galaxies, very useful in calibrating the size and age of the universe.

A new area where amateurs are contributing is in searching for planets of other stars. There was a NASA program just recently announced to enlist amateurs to look for stars that might have a planet orbiting on a plane such that it passes between us and that star. When this happens, the light from the star will dim just slightly because of the eclipse, so to speak, by this relatively tiny planet. And it turns out that that can be measured by the equipment now possessed by a great many amateur astronomers. So it's conceivable that the first planet beyond earth to be discovered that has life on it could be discovered by an amateur astronomer with a backyard telescope. 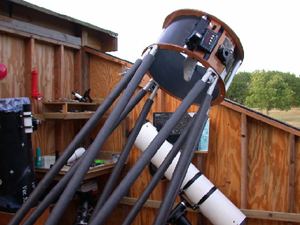 CURWOOD: Tim, if you look back at all the amateur astronomers whom you have met, which one do you feel has done the most to popularize astronomy?

FERRIS: I think the two living amateur astronomers who probably have done the most to popularize their field are Sir Patrick Moore in England, who for over 40 years had a monthly program about the night sky on the BBC, who wrote something in excess of 50 or 60 books, and John Dobson, who figured out how to make telescopes much more cheaply than had been possible, thus opening up amateur astronomy to many people who couldn't afford it before and putting much larger telescopes in the hands of those who could. And indeed, when John meets, particularly, a younger person who seems to catch the fever of stargazing and wants to learn more, he will often just give away the telescope and go make another one.

FERRIS: Most of the great advances in science have been driven by technology in one way or another and that's true of amateur astronomy, too. And we're right on the edge of an era when an amateur or budding professional astronomer in Bangladesh, or Iran or South America, can begin doing observations within nothing other than a keyboard and modem.

CURWOOD: Nothing but a keyboard and modem?

FERRIS: And access to a telescope, and that's what's happening is that telescopes are becoming available on-line. We have a project at Berkeley called "Hands on Universe" that does this; allows school children to use the telescope at Leuschner Observatory. It's kind of an older instrument. It's not in tremendous demand. So using this telescope, two students in Oil City, Pennsylvania took the first image of a super nova, exploding star, in the Galaxy M51. And another group of students in New England discovered a trans-Neptunian object. This is an icy planetoid out past Neptune of which relatively few had yet been discovered, even by professionals.

CURWOOD: Recently I was in the southern hemisphere, saw the Magellanic Clouds really for the first time because I was out in the middle of nowhere, where it was really bright. That's amazing.

FERRIS: Magellanic Clouds are galaxies, satellite galaxies of ours, and that's an incredible thing to see. More incredible, I should think, is the view of us from one of the Magellanic clouds since they see the whole Milky Way Galaxy, a big spiral galaxy spreading halfway across the sky. Magellanic Clouds would be a great place to do astronomy from. But we have a pretty good location in space and time where we are. The human species happened to evolve at a time when the solar system was passing through a relatively clear place on the disk of our galaxy, a bubble blown out by an old super nova explosion long ago.

CURWOOD: So, I imagine you've seen countless images of space, but I'm curious. What are the sounds of space?

FERRIS: [Laughter] Well, I suppose that the nearest thing to sounds of space--of course, there aren't any real sounds since sound can't travel through a vacuum--but radio, because we listen to radio, is most often turned into an audio signal. Radio noise from the planet Jupiter, for instance, is routinely turned into audio signals by changing the speed, speeding up the playback. I've listened to those sounds. They're quite interesting. Some of them sound like wavering sheet metal the way it's done off-stage in one of Mahler's symphonies, and others sound like a low earthquake-like rumble, and others like whistles.

You can also hear, sort of, the sound of meteors. When meteors go through the atmosphere, they create an ionized trail. Signals from an FM station that you normally couldn't receive, will be picked up on your radio briefly as they bounce off this fresh bit of ionization, and then fade away again.

You know, there are radio telescopes all over the world, and they're kept occupied all day and all night charting radio noise from the universe. So we think of radio as an artificial device because we recently got into the radio business, but the universe has been in the radio business for over twelve billion years now.

CURWOOD: Tim, in your book you write about the feeling you had as a young man driving cross-country on the open roads. Could you read us this passage?

FERRIS: Sure.
“In restless youth I crossed the country a half-dozen times driving by night, tuned to the ozone. But eventually, things changed. The highway back then was a symbol of freedom, and one still heard talk of the song of the open road. Now there are few genuinely open roads. The two-lane blacktops are pinched off by detours, and traffic can clog even remote stretches of interstate in the depths of night. Most of the time you drive as if in one car of an endless train, with taillights in the windshield, and headlights in the rearview mirror. Nowadays the only truly open roads go straight up through the ionosphere and the ozone, and onto the planets and the stars.”

CURWOOD: So, as a young man, what made you seek out the open roads of space?

FERRIS: I first got interested in astronomy through a book. I was given a book for my birthday when I was just a boy called “A Child's History of the World” and it came with an account of the formation of the earth. And I realized that wow, all of this stuff here on this planet, this soil that comes up between my toes when I walk across a plowed field, the oceans, everything, wasn't always here. It used to be out there. It got assembled through some astronomical process.

So I realized that first of all there wasn't any "out there" that we were in the universe, and secondly, that if I wanted to understand this part of the universe, I would have to learn astronomy. So I started reading books on astronomy and got a tiny little telescope, started stargazing.

FERRIS: And I've been at it ever since.

CURWOOD: Tim Ferris is a science writer and an amateur astronomer whose new book is called “Seeing in the Dark: How Backyard Stargazers are Probing Deep Space and Guarding Earth from Interplanetary Peril.” Thanks so much.

FERRIS: Thank you. It's been a pleasure.


Click here to order "Seeing in the Dark" by Timothy Ferris">