Living on Earth’s Maggie Villiger reports on a lizard species whose promiscuous females hold all the power in the mating game.

CURWOOD: Just ahead, an experiment in local control of federal lands. First, this page from the Animal Notebook with Maggie Villiger.

VILLIGER: Out on the dating scene, some guys have all the luck. In the lizard world, the largest and most attractive males usually take over the best territory by brushing off their smaller competitors. The most desirable turf has lots of rocks for warming up in the sun and shaded nooks and crannies for cooling down.

Researchers decided to spice up mating season for a territorial group of lizards in California. They moved the best rocks from the large males’ turf to smaller males’ territory areas, so now the smallest males had the swingingest bachelor pads. And the females responded. The ladies moved to set up housekeeping with the smaller guys. 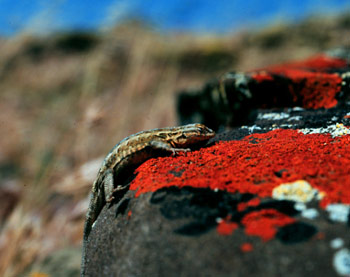 It looked like good territory was the deciding factor for females looking for love, but then researchers did paternity tests on the females’ offspring. It turns out the females were sneaking off to mate with larger males, too.

One clutch of lizards can have multiple fathers, since the mother can mate several times and then later on select whose sperm will actually fertilize her eggs. Having two mates gives the female’s offspring the best of both genetic worlds: larger dads produce the best sons while smaller dads produce the best daughters. So, female lizards don’t waste their time looking for that one perfect guy. Playing the field is an advantage for them and their offspring.

CURWOOD: And you’re listening to Living on Earth.