Two years ago, Congress bought 90,000 acres of scenic land in New Mexico and, in an unusual move, appointed an independent board to oversee it. As Paul Ingles reports, the board’s early decisions have made some environmental groups worried about what lies ahead.

CURWOOD: It’s Living on Earth. I’m Steve Curwood. In recent weeks, hikers have been paying as much as fifty dollars each to get an up-close look at the Valles Caldera National Preserve. It’s beautiful land at the site of a dormant volcano in northern New Mexico. Two years ago, the U.S. bought this 90,000-acre tract from private owners for about 100 million dollars. And instead of assigning the land to an existing federal agency, Congress broke precedent to set up a largely local, independent board of trustees to run it. The expensive hiking fees and other early decisions by that board have opened a new chapter in the debate over federal lands. Paul Ingles has our story.

MARTIN: Now be honest here, now how many people is this the first legal crossing of the fence?

INGLES: Craig Martin pushes down on the top of a barbed-wire fence and one by one a dozen hikers carefully step over, including Dave Clark and his wife Caroline Boyle.

CLARK: We’ve lived in the area for 15 years and we’ve hiked this area extensively. We’ve just never had an opportunity to cross the fence line into the-- 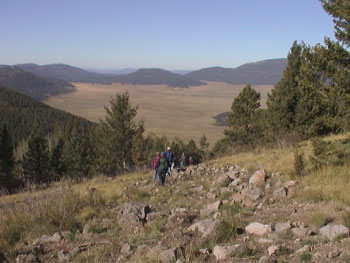 MARTIN: The uniqueness of the property stems from its geologic history.

INGLES: Craig Martin, the guide for today’s hike, is writing a book on the history of this land.

MARTIN: We’ve got a double caldera. A caldera is nothing more than a place where because of a volcanic eruption the surface of the ground drops down, maybe as much as 3,000 feet. And we’re right on the edge of that dropdown area right here. We want to stop here and take a look out towards this beautiful vista here to the southeast.

INGLES: A few miles away, the yellowing fall grasses and the vast expanse known as the Valle Grande radiate in the early morning sun. Martin leads us down a steep and rocky incline-- it’s certainly not a finished trail-- that cuts through mixed conifer, aspen and pine trees filling the caldera rim.

[ELK BUGLING IN THE DISTANCE]

INGLES: Everyone stops short when we hear elk in the distance. Martin says it’s part of an overpopulated herd that was recently thinned out by a short hunting season allowed by the board. A couple of hours later, Martin takes us through the grasslands, past a gathering of other guests invited by the Valles Caldera board---cattle from local ranchers whose grazing allotments on other public lands were limited by the state’s severe drought.

MARTIN: I was watching the first shipment come in and the cattle certainly looked like they were stressed from the drought. They were obviously living in a poor rangeland. These guys look pretty fat out here today. They look content.

INGLES: The elk hunting and cattle grazing programs were set up by the preserve’s nine-member board of trustees much faster than the U.S. Forest Service, Park Service or Bureau of Land Management could ever have handled them. Those agencies wrestle with, as one park staff reported, tons of regulations and lengthy appeal periods on every decision, constraints that aren’t placed on the Valles Caldera board. Environmental historian William DeBuys is board chairman.

DeBUYS: Every national forest is supposed to have a ten-year plan on the book to guide management over the ensuing ten years. And I don’t think there’s anybody in the Forest Service or out of the Forest Service who is familiar with that system who would say that it’s a very good or a very effective system. We want to pursue management adaptively, where we get information on the effects of last year’s work and we use that information to revise how we’re going to approach next year’s work.

INGLES: Seven of the board members were appointed by President Bill Clinton. All are New Mexicans, each with an expertise in ranching, forestry, wildlife, conservation or local government. It’s the fact that they are local that concerns John Horning of Forest Guardians, a habitat protection advocacy group that would rather have seen the land run by the Parks Service.

INGLES: Board members point out that all their decisions must still satisfy federal environmental and endangered species guidelines. But Horning considers the grazing program a step in the wrong direction, as rains take the cattle waste into the waterways here which, he says, have long violated water quality standards. The preserve’s executive director Gary Ziehe concedes that fact, but says the act of Congress that transformed what had been called the Baca Ranch into the National Preserve mandates that some ranch activities be maintained. Ziehe considers this first grazing program a cautious step by the board and says the land’s health is rebounding.

ZIEHE: Under the previous ownership, grazing was at a level of about 4,000 to 5,000 steers. We’re right now grazing 700 head of cows. And I would emphasize that under the management of the previous owners the condition of the Baca location was improving.

INGLES: Another unique goal of this experiment is to make the preserve financially self-sustaining within 15 years. Some environmentalists, like John Horning, worry that mandate might pressure a board to favor money-making extractive uses like logging, mining or more grazing. And with three board terms expiring in January 2003, they wonder how Bush administration appointees might alter policy. Both Ziehe and DeBuys are urging the administration not to make any board changes this time around. Meanwhile, the board’s current priority is getting the public into the property. But the high price of the hikes has drawn objections.

INGLES: Ernie Atencio coordinates the Valles Caldera Coalition, representing 17 local and national organizations, many of which are calling for less expensive public access. But the company hired by the board to run the hikes says, so far, that’s not possible. The preserve gets five dollars from each $50 fee, ten goes to the guide and the rest, says Kimber Barber, owner of Valles Caldera Adventures, pays for shuttle vans, snacks and other business overhead.

BARBER: Right now, I’m not breaking even yet, so it’s-- that’s the truth of the matter. So if there’s a way that we can do it for cheaper, we will, and I’d like to see that happen.

INGLES: The Coalition’s Ernie Atencio offers some cost-cutting ideas, like staging areas closer to the preserve, using volunteer carpools instead of vans and volunteer guides instead of paid guides. The board says that lower-cost access mostly depends on creating infrastructure first: new parking, drinkable water, improved roads and trails, a visitor’s center, all things the board hopes to put in place without sacrificing the quiet beauty of this remarkable landscape. That’s just one of many challenges facing this unique board that, some say, has been mandated to be all things to all people.

For Living on Earth from the Valles Caldera National Preserve, I’m Paul Ingles.