In the latest installment in this occasional series, we’ll hear how a single pet cat eradicated a species of bird.

KNOY: The most famous animal inhabitant of the Galapagos Islands is, of course, the tortoise. In fact, the name "Galapagos" is taken from the Spanish word for a kind of saddle that the tortoise's shells resemble, and Charles Darwin used the giant reptiles to help explain his theory of evolution.

Originally, there were 15 different species of Galapagos tortoise. Four of these are now extinct, and the rest are endangered. In our continuing series we call "A Gap in Nature," author Tim Flannery profiles another species we'll never see again.

FLANNERY: Very few species have been exterminated by a single individual, but such was the fate of the tiny Steven's Island Wren. The only known perching bird incapable of flight, the Steven's Island Wren was a subtly spotted bird once common throughout the New Zealand area. But before the arrival of Europeans, a rat brought by the Maori eliminated it from over 99 percent of its habitat. 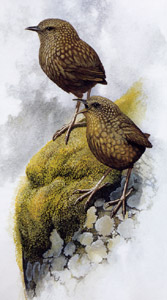 Its last refuge was the small rocky outcrop of Steven's Island. In 1894, the New Zealand government built a lighthouse there and the lonely lighthouse keeper decided that he must have a cat for company. Within a year or so, that solitary feline had caught every one of the island's tiny wrens. Tibbles then brought them one by one and very much dead, to David Lyle's door. Thinking them strange birds, Lyle sent 17 little bodies to a museum for identification. So this is the case of a species discovery and extinction all in one fell swoop.

Lyle was the only European ever to see the birds alive, and even he observed them just twice. He reported that they ran about like mice among the rocks. Twelve of Lyle's, or should we say, Tibble’s specimens, are still held in museum collections today.

KNOY: Tim Flannery is author of “A Gap in Nature: Discovering the World's Extinct Animals”. To see a picture of the Steven's Island Wren and other ex-animals go to our website loe.org. That's loe.org.

And coming soon to the Living on Earth website, award winning children's book author Lynne Cherry reads from her new release “How Groundhog's Garden Grew”. It's a story about how one little critter learns to grow his own food instead of stealing his neighbor's, and Cherry says there is a lesson for all kids.

CHERRY: There is really no problem getting out in nature even if you live in the city. You can take a magnifying glass and you can look at the plants growing in the crack of a sidewalk. In fact, E.O. Wilson got his start as a biologist as a child looking at ants coming out of the cracks in the sidewalk. So nature isn't something that's only out in the country, nature is everywhere.

You're listening to NPR's Living on Earth.


“A Gap in Nature: Discovering the World’s Extinct Animals” by Tim Flannery