The medina, the old town of Marrakech, Morocco, was once known as “the garden city of North Africa.” Private homes had lush courtyards; orchards, grapevines and trees filled the city streets. But as the population grew, the gardens made way for shops and houses. But there’s a new movement to bring back the gardens of the medina. Clark Boyd reports.

KNOY: Since its founding in the year 1071, the Moroccan city of Marrakech has been an oasis at the edge of the Sahara Desert, a place of rest and comfort for traders from across Africa and Europe. Traditionally the city's old town, known as the medina, has been filled with gardens, but in recent years the population of Marrakech has exploded, and its green spaces are disappearing. As Clark Boyd reports, a group of citizens have now banded together to re-green the medina of Marrakech. 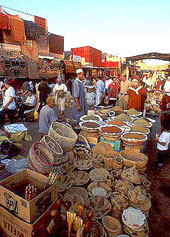 [SOUND OF MUSIC AND VOICES]

BOYD: Walking through the Marrakech medina, it's hard to believe that this was once known as the “Garden City of North Africa.” Every inch of the old part of the city looks like it's covered in concrete and asphalt, and all of it is constantly buzzing with human activity.

BOYD: BMWs and horse carts jockey for position on the medina's narrow streets, while in the walkways through the markets, craftsmen busily prepare for the day's business.

BOYD: Historically, a majority of the space inside the walls of the medina was devoted to what western city planners today would call "green space". Residents used the land to plant gardens, fruit orchards, and climbing vines. In the early 1900's, the medina supported a population of about 60,000 people. Now it's home to four times that many residents.

AL ALAWI: As you see, once we go through any of the gates, it really gets--

BOYD: Hicham Al Alawi is a tour guide and life long resident of the Marrakech medina. Alawi says that the population increase began when Moroccans started migrating to the cities a century ago.

AL ALAWI: A lot of people have immigrated from the countryside actually inside the medina because of the drought, because of the economic conditions that haven't been really at the ease of those people, and they were seeking of improving their ways of life.

BOYD: And as the population grew, the green spaces dwindled. In the inner courtyards at the medina's private homes, plants and trees were cut down to make space for shopkeepers. Vegetable gardens that once provided ample food for the people, were dug under when new housing was built on the land. Even the sultan's impressive Royal Gardens, once the pride of all the medina's residents, were left to whither away to dirt as water resources were taken over by the burgeoning population.
Residents like Mustafa, who makes clothing and who has been working in the medina since he was six, bemoan the loss.

MALE VOICEOVER: I remember when there was a huge, shadowy olive tree in the spice market. But they cut it down, because they needed the space. They didn't realize that after they cut it down, they'd have to stand in the hot sun all day.

MARTIN: It is the point of botanical diversity, a place of great floristic diversity in North Africa. It's the most diverse area in the Mediterranean basin if you exclude Turkey, and the biological diversity in terms of plant and animal species that you certainly find here, is clearly matched by the cultural diversity.

BOYD: And so Martin decided to try to save the medina's green spaces. He started up a non-profit called the Global Diversity Foundation. With the goal of “re-greening” the Marrakech medina, Martin first turned to Mohammed El Faiz, author of two books on the gardens of Marrakech. El Faiz says that traditional Moroccan gardens weren't just pretty.

MALE VOICEOVER: Sure these gardens were decorative, but they also helped the people by having vegetation: fruit trees, aromatic plants, medicinal plants. There was a functionality to the gardens. 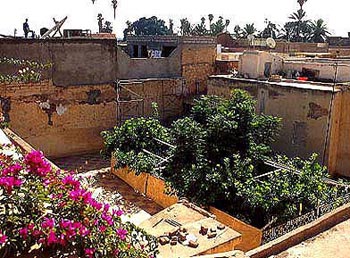 BOYD: El Faiz's knowledge, along with input from residents, helped the Global Diversity Foundation's Gary Martin plan how best to bring back the medina's green spaces. The idea, says Martin, is to try to get people to use whatever space is left for greenery to refurbish the old royal gardens with plants, and to encourage homeowners to once again devote courtyard space to trees and vines.

MARTIN: Let's do re-greening with some of the historically resident species; the things that used to grow there, that grew there for centuries, things like carob trees, grape vines, olives, date palms. These are the things that we really associate with North African civilization in general, and particularly urban areas, and areas in the rural hinterland around cities. And these are the species that are really, if you could call it that, the North African suites of useful species.

BOYD: The municipality is working to insure that enough water flows into the medina so that all these efforts will succeed.

BOYD: In the wool market in the heart of the Marrakech medina a grape vine, or daliya, planted a year ago by the Global Diversity Foundation is now beginning to wind its way up a trellis. It's one of a number of small re-greening projects that are in the works here. The idea is to use small amounts of money to start the initial plantings, and then let the locals take over.

More than 400 women sell clothing here, and they fiercely guard and tend the vine, no one more so than 60 year old Fatima.

FEMALE VOICEOVER: I water it every evening when the temperature cools off. I also make sure the vine is fertilized, and that the weeds are removed. I tell all the other ladies here to do the same.

BOYD: Fatima and the others say that they can't wait until the summer when they'll be able to sit in the shade under the vine, sipping a cool drink. 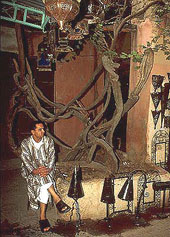 BOYD: They also plan on divvying up the grapes that they grow amongst themselves, a throwback to the old days when the medina's green spaces were shared equally among all. For Living on Earth, this is Clark Boyd in Marrakech, Morocco.