Ode to a Hot Dog Stand

During its seventy year tenure, a hot dog stand in Oakland has become an anchor for residents of the city’s Temescal neighborhood in good times and bad. Producer Peter Thomson prepared our sound portrait of The Original Kaspers.

CURWOOD: Think about that special spot you remember from your hometown. Maybe it was a store or a restaurant or a playground. That spot where you felt, “this is my town, my place, my home.” Chances are there was a unique name over the door and a unique character behind the counter or concession stand.
And in some corners of America, these quirky old businesses still survive. One of these is a little scrap of a place in the neighborhood of Temescal, in Oakland, California. It’s called Original Kasper’s Hot Dogs, and for more than 70 years it’s served up a sense of community along with ketchup and onions. Producer Peter Thomson has this sound portrait.
YAGLIJIAN : Hey, how are you doing today?
MALE: Man, I’m ...(inaudible). I need a hot dog.
YAGLIJIAN: Okay, one original coming right up.
{KA-CHING!]
MALE: I love Kasper dogs, and they do something a little different to spice it. I think ...(inaudible)
YAGLIJIAN: It’s just amazing what a simple little item like this hot dog, the kind of joy that it brings to people.
FEMALE: It’s more than just a hot dog. It’s the feeling that they make you feel when you come here. It’s like home.
MALE: Oh my god, I’ve been coming here since before Harry was born. [laughs] Keeps me going.
[KA-CHING, KA-CHING!]]
YAGLIJIAN: My name is Harry Yaglijian, I operate Original Kasper’s Hot Dogs, the original Kasper’s at 45th and Telegraph, right where Shattuck and Telegraph meet here in Oakland, California. And we were founded in 1929 by my grandfather, Kasper Kajulian. And this business was run by my father for over 50 years, between 1947 and 1997, at which point I took over managing the business.
[KA-CHING, KA-CHING] 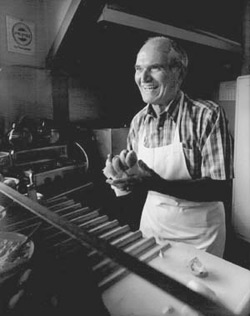