Jesse Williford is a plaintiff in the climate change lawsuit. He’s concerned that rising sea levels and increased intensity of storms will add substantial costs to building his retirement home on Emerald Isle in North Carolina. In a sound portrait, we travel to Emerald Isle and listen to Mr. Williford’s concerns.

CURWOOD: Pam and Jesse Williford are among a group of citizen plaintiffs in the NEPA climate change lawsuit. The Willifords live in Raleigh, North Carolina, and hope to build a small retirement home on Emerald Island on North Carolina’s outer banks. Jesse Williford says he and his wife are concerned that rising sea levels, increased storm severity, and erosion resulting from climate change will add a substantial cost to building their dream home.

WILLIFORD: I, first of all, came down to Emerald Isle about 1970, so a good 30 years ago. And my wife and I have come down just about every year since then, and bringing our family down. So, we’ve been coming down pretty regular for about 30 years. About 25 years ago, we purchased a lot down here because we were very interested in retiring down here. It’s such a nice, peaceful place, and has such nice, wide beaches. And the lot that we purchased is about 1,000 feet from the ocean. So you can actually see the sand dunes that border the beach from the edge of the lot.

WILLIFORD: As you see from where we’re sitting on top of this deck now, it looks like, to me, we’ve lost 20 or 30 feet of this particular sand dune. I think the biggest amount of sand is lost during the hurricanes. When the hurricanes…the frequency of the hurricanes and the strength of the hurricanes has really taken away that sand. Since these islands are all just sand, just pure, white sand, you expect to have some erosion and some movement. But the thing that’s concerned me about the global warming is, as ice melts in some places, then the sea level increases, you know, very small kinds of amounts. But that means there’s going to be more erosion whenever that happens.

[SAND COMING OUT OF A PIPE]

WILLIFORD: They’re adding sand to the beaches here, just trying to replenish the sand that was lost. Because if the dunes keep getting eroded, then the houses on the main front of the beach are going to be eventually washed away, or the foundations will be washed away, and then they will be condemned. And eventually they’d be destroyed. So they’re trying to put the sand back to kind of save those houses and preserve our tax base. Because these houses along the beach here at Emerald Isle pay a tremendous amount of taxes. They go to the support of the county itself. So that’s why they’re having to replenish the beach here. 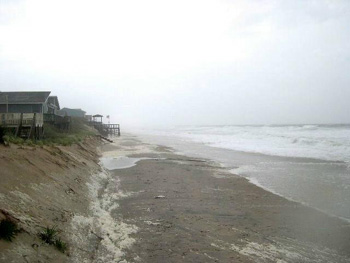 A sand replenishment program is set to shore up
the eroding beaches of Emerald Isle.

[TRUCKS BACKING UP, FOOTSTEPS ON LEAVES]

WILLIFORD: The lot, over the last 25 years, we’ve let it just kind of grow. And so, we have not cleared anything out. So, it’s a little thicker than it used to be. But some of our trees have died out, which is kind of scary…some of the large trees. They haven’t been dead that long. My guess is probably three or four years, along that line. I suppose that goes back to a hurricane that we had in 1996. Hurricane Fran, and I think, also, Hurricane Bertha came through. And what was unusual about both Bertha and Fran was that somehow or another there was a tremendous amount of salt spray that kind of went across the island, and many cedar trees were killed. Of the 30 years we’ve been coming down here, that was the only time I’ve seen that much salt spray do that much damage to the vegetation and to the trees.

WILLIFORD: The plans that we originally had were to build a small kind of cottage, hopefully not too expensive. But now it seems like we’ve had more hurricanes over the past few years, so it makes us more concerned about our building. We need to make sure we build it strong enough. I think the codes over the years have changed, and may change some more.

WILLIFORD: I’m very surprised that I’m here talking about this today because I never pictured myself as getting involved. I’m usually pretty low key and kind of take things as they come and go. But as I see some things that kind of directly effect me -- which would be the island -- seeing some major changes in that one, and seeing the trees getting damaged, and then concern about being able to build here on the lot that I’ve got, and to think that my government is doing some things, or not doing some things, that are causing this pollution and this climate change to happen. And that’s going to harm the environment for all of us, all the people in the world.

CURWOOD: Jesse Williford lives with his wife, Pam, in Raleigh, North Carolina. The Willifords are plaintiffs in the NEPA climate change lawsuit.