This week, we have facts about the first Teddy Bear. It was one hundred years ago that hunting enthusiast President Teddy Roosevelt lent his name to the stuffed animal.

CURWOOD: Welcome back to Living On Earth. I’m Steve Curwood.

CURWOOD: When you were small, you took it everywhere, and maybe you still do. It’s fuzzy and soft, and turns 100 this week. It’s the Teddy Bear. The cuddly stuffed animal that got its name from the avid bear hunter, President Theodore Roosevelt. As the story goes, the presidential hunting trip was arranged in Mississippi back in 1902. But when no bears appeared, Teddy Roosevelt’s companions tracked down the only one they could find – a raggedy old bruin that they tied to a tree so the president could claim his prize. But the suffering animal had wounds from hunting dogs and Roosevelt couldn’t bear to shoot. Instead, he ordered it euthanized.

The story made the news through a political cartoon drawn with some artistic license. It portrayed TR sparing an adorable bear cub. Citizens warmed to this tender image of their president, and a Brooklyn candy store owner saw dollar signs. He contacted the White House and asked for permission to sell a synthetic toy cub named Teddy’s Bear. The president was unimpressed with the idea, but gave permission anyway, and Teddy’s Bear made its debut in a Brooklyn store window in 1903. 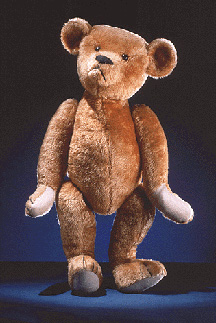 From the early wire jointed teddies, to a 1985 talking Teddy Ruxpin, the species Ursus Teddy keeps evolving. But if you want to visit the original Teddy’s Bear, you won’t have to wrestle it from a toddler. The centenarian cuddly is safe and sound in Washington, D.C. at the Smithsonian Museum of American History.

And for this week, that’s the Living on Earth Almanac.