America’s love affair with perfect flowers may come at a cost: the toxic chemicals used to keep the flowers flawless may be harmful to workers’ health and consumers, as well. Clay Scott reports.

Americans spend $20 billion dollars a year on flowers, and the biggest day, as you might imagine, is Valentine's Day. But fewer and fewer of these blossoms are coming from local producers and the neighborhood florist. Small, family-run greenhouses have been pretty much swept aside by global corporations, and more and more flowers are being sold by supermarket, drug and convenience chains. And as Clay Scott reports from San Francisco, our passion for beautiful flowers may be taking a toll on human health, both in the U.S. and abroad.

SCOTT: It's three o'clock in the morning and most of San Francisco is asleep, but the city's sprawling flower market is open for business. In a dozen warehouses at the corner of Sixth and Brannon Streets, scores of florists are already at work. They walk briskly from stall to stall, styrofoam coffee cups in hand, choosing their day's supply of flowers from among the incredible variety on display. 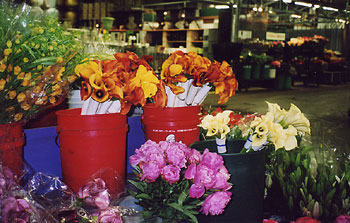 SCOTT: Under the bright fluorescent lights, the surreal colors make your head spin, and the air is thick with heavy, sweet, tropical smells. The San Francisco Flower Market, one of the oldest and largest in the U.S., once sold only locally grown flowers. Not anymore.

FLOWER SELLER 1: They come from all over the world: Ecuador, Colombia. Probably, that's about 20 percent of our sales, are roses from Ecuador.

FLOWER SELLER 3: South America, Mexico. They come from all over.

SCOTT: More than two-thirds of the flowers sold in the United States now come from South America. In 1991, Congress passed the Andean Trade Preferences act, giving South American flower growers exemption from U.S. import tariffs. The idea was to encourage the development of crops other than coca plants, used to make cocaine.

A decade later, while the drug trade shows no sign of drying up, the South American flower industry has proven to be nearly as lucrative. And it's easy to see why the flowers are so popular. Looking through the Ecuadorian and Colombian roses, with their silky petals and brilliant colors, it's almost impossible to find one with a blemish. But that perfection comes at a cost.

SCOTT: Olga is a flower worker from Colombia. Answering questions I e-mailed to an interpreter in Bogotá, she talks about the years she spent picking 350 roses a day, until she got so sick she could no longer work. Her muscles and bones ached, she says, and she felt dizzy and nauseous. She blames those symptoms on daily exposures to the many pesticides used in Colombian greenhouses.

SCOTT: There's very little protective clothing for workers, Olga says. The bosses don't allow enough time for the pesticides to go away before they send you back in, sometimes just 10 or 15 minutes after they fumigate. They don't even care if women are pregnant. 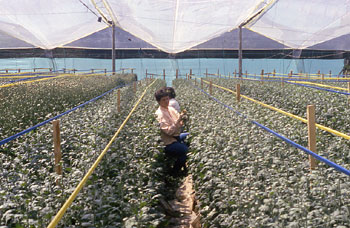 Colombian workers are often sent back to work in greenhouses shortly after pesticide spraying.

SCOTT: Over 100 types of fungicides, herbicides, insecticides, and preservative chemicals are approved for us in Colombia's flower industry, including more than a dozen, such as aldicarb and metanil, severely restricted in the U.S. as probable carcinogens. Many flower workers in Colombia and Ecuador, the majority of them women, echo Olga's complaint that they are forced to re-enter the greenhouses too soon after spraying. That's an issue of growing concern to those who study the effects of pesticides.

SOLOMON: In an open field where there is a breeze and there is some dilution, it may be possible to re-enter relatively soon. In a greenhouse where the air is not circulating or exchanging, entering too soon could be like walking into a gas chamber.

SCOTT: Many of the acute health effects of pesticide poisoning, such as vomiting, diarrhea, tremors, mimic common illnesses. That's one reason, says Gina Solomon, that pesticide poisoning is so often misdiagnosed. And, there are potential long-term effects that are even more dangerous and more difficult to recognize. Ray Chavira is a scientist in the San Francisco office of the Environmental Protection Agency.

SCOTT: Studies have linked long-term pesticide exposure to Parkinson's disease, non-Hodgkin's lymphoma, leukemia, brain tumors, prostate and breast cancers. There is ample evidence, says Margaret Reeves of the Pesticide Action Network, that the majority of the pesticides used in the flower industry are hazardous. It's urgent, she says, that conditions for greenhouse workers be improved.

SCOTT: Pesticide Action Network is supporting the efforts of South American flower workers to organize, but that's not easy in a country like Colombia where trade unionists have been the victims of harassment and assassinations.

Meanwhile, there are growing concerns that the flower workers might not be the only ones at risk. South American roses are often heavily sprayed just hours before being cut, and the residues can linger for days, or longer. Which means that the flowers you give your sweetheart almost certainly contain residues of pesticides. Since flowers are not a food crop, those pesticides are not regulated by the U.S. federal government. Still, says the University of California's Gina Solomon, you may not need to work in a greenhouse to be affected by them.

SOLOMON: Consumers don't think to protect their skin when they're handling flowers, and yet their skin is a vulnerable portal of entry by which pesticides can get right off of the flower stems, flower leaves, and flower petals right into their bloodstream and into their bodies.

SCOTT: Even here in San Francisco, where many consumers demand chemical-free food and fair trade coffee, there seems to be little awareness of the issues surrounding pesticides and flowers.

OLIVEIRA: Yeah, that'll be actually cute, if it's short, but just cut it. Okay.

SCOTT: In San Francisco's inner sunset district, florist Heidi Oliveira is doing a brisk business. Her shop is stocked with orchids, lilies, and roses from around the world. I ask her if there's much demand for pesticide-free flowers.

OLIVEIRA: I haven't had a customer come in asking for organic, non-pesticide. I've never even heard of a completely organic farm, to tell you the truth.

SCOTT: In shop after shop I get the same answer from florists. Suzie Mills’ family has been in the flower business for years.

SCOTT (to Mills): If you had, you know, let's say locally grown, organic flowers that were maybe not perfect, do you think you could sell them?

SCOTT: So, there's just a huge pressure to have something perfect?

MILLS: Yeah, perfect, exactly. No water stains, no fertilizer marks, no, you know, dead leaves, yellow leaves, anything. It has to be perfect.

SCOTT: Responding to that pressure, South American flower farms continue to spray at frequent intervals, despite growing evidence that the practice puts workers at risk. Dole Food Company is the largest flower producer worldwide, and one of the largest in Colombia. Officials at Dole declined comment for this story.

In Switzerland and Germany, meanwhile, consumers can now buy South American roses with a fair flower label, meaning that the flowers were produced in accordance with the four year old International Code of Conduct for the Production of Cut Flowers. Growers who sign the code agree to follow basic environmental, labor, and human rights standards. A small number of Colombian flower farms have responded to that demand and signed the code of conduct.

But the United States remains by far the largest market for Colombian and Ecuadorian flowers. And most flower growers are unlikely to change their practices as long as U.S. consumers continue to demand a perfect flower at any cost.

For Living on Earth, I'm Clay Scott in San Francisco.