Natural Gas on the Rise

There's a gold rush underway across the mountain west. This time the gold is methane gas, and it's cleaner than coal. Thousands of wells are going in. But there's a downside too, and ranchers are organizing against the industry. Living on Earth’s Anna Solomon Greenbaum reports.

The economy may be in the doldrums, the stock market down, but there's a boom underway across the Rocky Mountains. Technology has gotten good at finding and extracting the bubbles of methane gas trapped underground in coal seams, and now thousands of small but profitable methane natural gas wells dot the region.

Methane gas already meets a percent of the nation's energy needs and its future development is a top priority for the Bush administration. Some say this is good news because methane fuel does not pollute as much as oil or coal, and doesn't come from the volatile Middle East. But don't try singing its praises to some ranchers who get stuck with these wells on their land. As the wells, pipelines, and roads go in throughout the Rockies, another network is developing in parallel, one that links ranchers through activism.

Living on Earth's Anna Solomon-Greenbaum has our report.

SOLOMON-GREENBAUM: Southwest Colorado has long been dry, cattle ranching country. Now it's methane gas country, too, the grass broken here and there by brown areas of scraped earth.

LERNO: And if you look very carefully, you're going to see methane gas wells on just about every piece of property in this area. 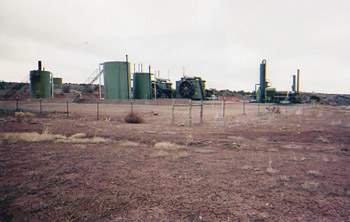 SOLOMON-GREENBAUM: When you drill into coal seams for gas, the first thing you get is water, lots of it. And here, that water is salty and bad for plants.

LERNO: This is where the water dumping pit was located. That water ran over into this area and has sterilized the soil. This part of the ranch property is, by and large, worthless. It won't grow anything.

SOLOMON-GREENBAUM: Like many landowners in the west, Paul Lerno owns only the surface rights to his property--the right to build and to farm, for example. The minerals beneath, in most cases, belong to the federal government. Whoever owns them can lease them to a gas company, and that company then has the right to come onto the property and explore for gas.

At first, Lerno says, he was more than willing to accommodate them. He even took down a brand-new fence so that their trucks could fit through. But after months of dealing with the water and other problems, he finally confronted a couple of the foremen in the field.

LERNO: I didn't want trucks going out on the field. I didn't want gates being torn down. I did not want their employees using my property as a bathroom. And I said also I did not want the peace and the tranquility and the quietness and the solitude and the joy that I had of coming out here to my ranch [pauses] destroyed by their equipment. Excuse me…let’s go up here, I'll be okay. I get emotional, especially about this.

SOLOMON-GREENBAUM: Lerno has been shaken by his experience, enough that he's questioning his life-long loyalty to the Republican party. He knows the country's need for natural gas is not a Republican issue. But the Bush administration's ties to oil and gas, and the emphasis it's put on speeding up domestic energy production, have left him feeling like an outsider.

LERNO: We've gotten just a little bit of that feeling of being the little guy. We're not just blindly going to vote Republican. The Republicans are going to have to meet some of the issues that we see, particularly environmental issues -- this methane gas problem that we face here.

SOLOMON-GREENBAUM: Lerno says he hopes President Bush will encourage other renewable sources of energy. But if not, he'll have to consider other candidates in 2004.

SOLOMON-GREENBAUM: By that time, there's a good chance there will be more people in these parts, galvanized around the coalbed methane issue. At least that's what Tweetie Blancett is hoping. Across the border in New Mexico, the Blansetts run a hundred head of cattle, fewer than normal because of the drought.

BLANCETT: And this starts our ranch.

SOLOMON-GREENBAUM: For years, the Blancetts say they got along fine with conventional gas companies that operated on their land. But coalbed methane has been different -- louder and busier. Because of the water that comes up with this gas, there are big tanks and trucks hauling it to sites where it's re-injected into the ground. Noisy pump motors run 24/7, often outside homes or behind markets in the middle of town. On ranches like Tweetie Blancett's, safebrush and grass that's torn out for each well means less forage for cows and wildlife, and more erosion in this dry, unforgiving terrain. Blancett pulls into a cleared area, about an acre or so of bare dirt.

BLANCETT: There's no re-vegetation on there. That contributes to your erosion again. When it rains real hard, there's nothing to hold the water.

SOLOMON-GREENBAUM: Blancett says this site is typical of the more than 400 wells on her ranch.

SOLOMON-GREENBAUM: Squawks indeed. Blancett has been a leader in the move that's afoot to reform the coalbed methane industry. One day she got angry enough she locked the gates to her ranchland so companies couldn't get to their wells. People Magazine and ABC News have come to Blancett because, on the one hand, she's a conservative Republican rancher-- she even worked on George W. Bush's presidential campaign-- and on the other, she's a rabble rouser against the energy companies her president wants to support.

But to some in government and industry, Blancett's rhetoric is disingenuous. Ranchers, they say, have been over-grazing the basin for years. Others point out this part of the southwest isn't exactly the most productive ranchland in the U.S.

John Zent is with Burlington Resources, the largest producer of coalbed methane in the San Juan Basin. He's flying over desert striated by tan roads and flattened in places by well sites.

ZENT: Off to the left of us is Chaco plant. And all the gas from the San Juan Basin passes through Choco Plant. That plant supplies, on any given month, 7 to 10 percent of the natural gas needs of the United States.

SOLOMON-GREENBAUM: Ultimately, Zent says, the benefits to the nation of the natural gas will overwhelm the opposition. Energy from this basin produces about $350 million dollars a year in royalties to the federal government. Compare that with ranchers who pay only 100,000 for their grazing leases. And Zent says the grumbling ranchers are few.

ZENT: It does not worry me about affecting the industry's reputation. We deal with over 100 grazing lesees here in the San Juan Basin. We have issues with three or four of that number.

SOLOMON-GREENBAUM: When the plane touches down, Burlington's top PR guy, James Bartlett, who has been along for the ride, is quick to pull us into a quiet room. The industry, he says, is growing more sensitive to the environment and to ranchers. Burlington is compensating ranchers up to two times the value if cows are run over by company trucks or killed by drinking chemicals from drilling. And they're buying vast quantities of seed to re-plant ranch land.

BARTLETT: We try, if we try it once and it doesn't work, we go back and do it more than once. Some of the areas you'll see we've re-seeded three times.

SOLOMON-GREENBAUM: Ranching has often been criticized for being hard on the land. What the gas companies are using the land for, Bartlett points out, is a cleaner alternative to coal.

BARTLETT: The energy that we produce here and elsewhere actually drives the prosperity of the nation. Well, wouldn’t it be great if we could all say let's go produce the energy somewhere else. The question is, where else? If not in a desert, where? Because that's what we're dealing with here. It's a desert that also, fortunately, is productive for ranchers, to some extent.

SOLOMON-GREENBAUM: Bartlett shakes my hand and asks me to let him know if I hear any new complaints. He seems a bit surprised, as if he didn't expect a bunch of ranchers and environmentalists to attract national attention. Most ranchers, after all, aren't brought up on protests and publicity. They're historically, even iconically, independent people. But that may be changing.

FEMALE: How are you?

BLANCETT: How you doing?

SOLOMON-GREENBAUM: Upstairs in a small corner room, Tweetie Blancett works on reaching out to people in other parts of the Rockies.

BLANCETT: This is my office, where I do most of my work and where all my e-mails come in, and faxes, and that sort of thing.

SOLOMON-GREENBAUM: As coalbed methane expands out of the four corners area, Blancett is trying to help other communities fend off the type of damage she's seen here. She points to an e-mail from a woman in Delta County, Colorado.

BLANCETT: She wanted pictures of cows to go in an ad that she was doing, so that she could tell the people in Delta what it looks like when the cows are dead, or they're inside these pits, and what happens. We share information back and forth all the time, and we have a tremendous network.

SOLOMON-GREENBAUM: On Blancett's wall are photographs that show her standing with various politicians. There's President Reagan and the first George Bush and Senator Pete Domenici. There's Congressman Tom Udall too, who Blansett calls her token Democrat. She says coalbed methane is not a partisan issue, but it's not immune from politics.

SOLOMON-GREENBAUM: There are three things Blancett tells people who are facing coalbed methane development: form unholy alliances with traditional adversaries, like environmental groups; don't be afraid to go to court; and lock your gates. But other parts of the west, like Wyoming's Powder River Basin, are already booming. Until recently, it was still in the infant stages of its production. Now there are 12,000 wells, and it's projected by grow by more than four-fold in the next decade. Blancett shows me a CD where she keeps photographs.

BLANCETT: These people that are working on this issue, that have an experience, well, they don't have any pictures to show. So they naturally come to New Mexico. But I think, unfortunately, Wyoming is building quite an album too.