Natural Gas on the Rise (part 2)

We return to our story about the methane gas rush sweeping the mountain west. Anna Solomon-Greenbaum takes us to Wyoming and Montana where some ranchers are benefiting from the boom.

CURWOOD: Welcome back to Living on Earth. I'm Steve Curwood.

Traditionally, in Northeastern Wyoming, folks champion rugged individualism and conservative approaches when it comes to problem solving. But, as Living on Earth's Anna Solomon Greenbaum continues her report on coal-bed methane extraction, she explains that the industry expansion in the region is sparking a movement of unlikely activists.

SOLOMON-GREENBAUM: The snow in Northeast Wyoming is patchy, barely covering the grass on the rugged hills that stretch to the horizon. This is the middle of the Powder River Basin, coal-bed methane's most active battleground. It's where Bill and Marge West run cattle on 13,000 acres, much of which is now dotted with gas wells and strung with power lines. The first sign that something was wrong for the Wests was when the cottonwoods down along Spotted Horse Creek, trees that had been there before Bill's grandfather was born, started dying. 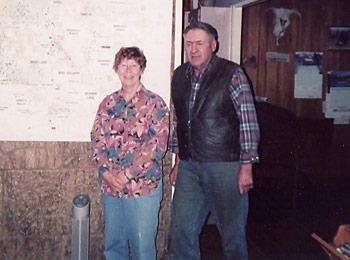 Bill and Marge West standing in front o a map of their ranch.

BILL WEST: Now, we're getting into the dead trees, the dead cottonwood trees where the bark was stripped off of them.

SOLOMON-GREENBAUM: The trees died after the meadow they stand in was flooded by water from coal-bed methane wells. Here in Wyoming, gas water is not re-injected into the ground. For the Wests, it's discharged into the creek, enough so that it over-flowed, flooding their hay and the trees.

WEST: We worked all winter cutting trees to get these trees off the hay meadow. We're selling firewood. Have an ad in the newspaper says, "Free firewood, come and get it."

SOLOMON-GREENBAUM: But the loss of the trees pales next to the lost of the West's alfalfa hay. Alfalfa is food for cows. It's what keeps a ranch going. Now, all that comes up is fireweed.

WEST: It's weed. It isn't alfalfa.

MARGE WEST: And you have to mix it with grains, or the cattle won't eat it. They'll just turn up their nose and starve to death.

SOLOMON-GREENBAUM: A few cows stand nearby, nosing at the snow. The air smells of smoke from cottonwood stumps the Wests are burning. On top of everything else, their drinking well has gone dry, a common complaint in this area. The Wests now haul water from town, a 45 minute drive each way. And already there are 50 new coal-bed well sites marked for drilling on their ranch. The Wests are trying anyway they can to make sure the future development is done better. They've even gone so far as to join an environmental group, something they wouldn't have dreamt of doing just a few years ago. Marge says she hopes her story will serve as a warning to others.

MARGE WEST: Maybe somebody else will wake up somewhere and say hey, we've got to be more careful.

SOLOMON-GREENBAUM: But, the more time you spend in the Rockies, the more varied the stories you hear about methane natural gas. And many of them are of satisfaction.

SOLOMON-GREENBAUM: Clara Lee Dillinger testified at a Wyoming town meeting that the coal-bed water has probably saved her ranch. Others said the watering ponds that companies build for them have fattened their calves, now that livestock don't have to walk as far for a drink. The variety of opinions reflect ranchers circumstances, too. Ranchers who own their own minerals, of course, are in the best position. But even people who don't own the mineral rights can negotiate with the gas companies. Many ranchers say they get more money from the companies than they've ever made ranching. Others say the new industry has had indirect benefits as well. Lee Mackey, a rancher and school bus driver, urged the governor to keep Wyoming friendly to the gas industry.

MACKEY: I've been a school bus driver for 26 years. And last year we got a substantial raise, and that is because of the coal-bed methane industry. And I'd like to say that we need to make sure that our businesses stay here. I know my son--

SOLOMON-GREENBAUM: If coal-bed methane is booming in Colorado, New Mexico, and Wyoming, it's Montana that's on the brink. Here ranchers, farmers, and environmentalists moved fast, so a lawsuit is blocking new wells for the moment. That means companies are losing money paying for leases they can't use.

ICENOGLE: Right now, as it is, Fidelity has around $70 million dollars invested in Montana. It's somewhat of a stranded asset.

SOLOMON-GREENBAUM: Joe Icenogle is with Fidelity Exploration and Production, the only company that had some wells in Montana before the moratorium came down.

ICENOGLE: Until we drill more wells, what we're going to do is have declining production. We have this infrastructure that's stranded.

SOLOMON-GREENBAUM: Icenogle says the water they've discharged into the river so far hasn't changed the river quality at all. He knows because they’ve been testing it. He says a lot of the negative stories are site specific. The coal-bed water here, for example, is nothing like the brackish stuff they have in New Mexico. 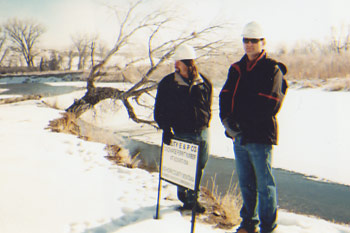 Joe Icenogle and Verlin Dannar of Fidelity, standing by the Tongue River in Montana, at a well discharge point.

ICENOGLE: They do try to transmit those horror stories from basin-to-basin. And one of the things that's consistent about all the coal-bed natural gas plays, whether it's the Black Warrior Basin, San Juan Basin, Uinta Basin, Powder River Basin, is that they're all different.

SOLOMON-GREENBAUM: Drilling in Montana is expected to begin again once the state has set stricter standards for the coal-bed methane water. But, many of the people down river don't trust that those standards will protect their livelihoods. Some farmers are already noticing problems.

MUGLEY: Yeah, this is dried.

SOLOMON-GREENBAUM: Roger Mugley irrigates his alfalfa with water that contains discharge from those first Montana wells, drilled before the moratorium. Mugley's eyes go wide and tired as he looks at a dead path of alfalfa.

MUGLEY: What on earth am I going to do when this whole thing turns into like this? And what's going to become of all of this when that happens?

SOLOMON-GREENBAUM: Over the past couple of years, Mugley has become an activist, traveling frequently to testify in the state capitol. It isn't what he imagined he'd be doing with his middle age, and it's beginning to wear on him. He, too, is asking questions about whether his values fit in anymore with the politics he's practiced his whole life.

MUGLEY: I was raised Catholic and I was raised Republican, not necessarily in that order. But, I guess, one gentleman called me one day and said, well, you must be a green Republican. Well, I guess, maybe I must be, but I guess I've always been that. And I still feel myself conservative, because I've not changed the way I view the dirt we stand on, and what we do to it, and how we treat it. How we treat the river. I don't think that's a very liberal idea. I still think that meets the description of conservative.

SOLOMON-GREENBAUM: It's a theme you're beginning to hear in this reliably Republican part of the United States. Mugley respects President Bush as a person and as a leader, but he's at the point where he's not sure who he'll vote for in the next election. While it's still too early to say whether votes will actually shift across the gas-rich basins of the Rockies, the culture may be starting to. People who have grown up herding cows and hauling hay are writing speeches, joining citizens groups, and e-mailing neighbors three states away. Some of the traditional boundaries out here between activist and conservative, property owner and environmentalist, are growing blurred. And maybe some of the people who seem like contradictions are slowly becoming a new kind of normal. For Living on Earth, I'm Anna Solomon Greenbaum in Miles City, Montana.