This year, the North American winner of the Goldman Environmental Prize is Judy Bonds. Bonds is a coal miner’s daughter who became a full-time activist against mountaintop removal mining after she saw her beloved West Virginia mountains and streams being destroyed. West Virginia Public Broadcasting’s Jeff Young has this profile.

CURWOOD: The Goldman Prize is often called the Nobel for the environment. Each year, activists on each continent receive the award worth $125,000 for their work. The winner this year for North America is Judy Bonds, the West Virginia woman working to stop the coal mining method called mountaintop removal. Jeff Young of West Virginia Public Broadcasting has this profile of a coal miner's daughter fighting to end a coal mining practice.

YOUNG: A former post office in Whitesville, West Virginia is home to the grassroots group, Coal River Mountain Watch. It might as well be home for the group's director, Judy Bonds. Most of her waking hours are spent here organizing protests, lobbying lawmakers, and writing to editors and senators to stop mountaintop removal. The 51-year-old Bonds points to a wall-sized map of Southern West Virginia. It shows the contours of the state's coal country.

BONDS: I can tell you exactly where they're heading by looking at a topomap, a USGS map. These coal companies want the cheap, easy, quick, fast way, regardless of human concern. And what we're looking at is the prize, called Pond Knob.

YOUNG: Bonds thinks Pond Knob on Coal River Mountain could be the next ridge flattened by mountaintop removal. The mining blasts the tops from hills to expose coal. Tons of leftover rock and dirt are dumped into valleys, burying hundreds of miles of Appalachia's headwater streams. The mining has so altered the landscape that the map Bonds pours over is no longer accurate, but she still scans for tiny signs of hope, like the crosses marking small family cemeteries.

BONDS: There's a law in West Virginia, and they cannot mine within 300 feet of a cemetery. They have to give some sort of protection to that cemetery. Basically, I would say our dead ancestors are helping us to fight these coal companies, and are another way to put a chair against the door to keep the wolf out. We're backed in the corner. We're using any means we can to save our lives.

YOUNG: Bonds knows the mining is changing more than the land. It's changing the people who live on it. It's certainly changed her. 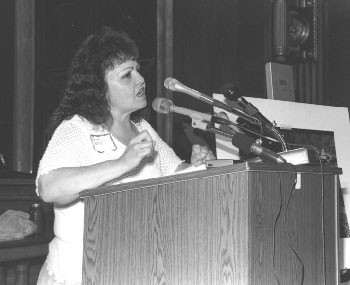 YOUNG: Just six years ago, Bonds was waiting tables at Pizza Hut. She lived quietly in one of the sharp, narrow valleys people here call "hollows." Marfork Hollow was her family's home for six generations. Now, Marfork is the name of a coal company, and Bonds is just another visitor driving by.

BONDS: Every time I pass by this hollow, I look, and it hurts. It breaks my heart, because this is where I was born and raised.

YOUNG: Bonds remembers when Massey Energy Company's Marfork mine opened ten years ago. It brought truck traffic, dust, and the noise of blasting. The extent of the damage became clear the day the stream near her house turned black with coal waste.

BONDS: And I heard my grandson say "Mawmaw." And I looked at him and he said, "What's wrong with these fish?" And he had both his little hands full of fish, dead fish. And I looked around him and there were dead fish laying all over the stream. And that was a slap in the face.

YOUNG: Bonds eventually sold her family land and moved about 10 miles south. She watched as more acres were mined and more coal wastes blackened streams. She didn't know what she could do about it until she attended a rally against mountaintop removal and realized she was not alone.

HECHLER: There are several things about Judy that developed as her activism developed. First of all, she's a person of great determination and great courage and great dedication. And secondly, she's a person who inspires confidence among people that she helps to organize.

YOUNG: In 1999, Hechler and Bonds organized a march to commemorate the Battle of Blair Mountain, an historic moment in the early effort to unionize the state's coal miners. Hechler says he knew Bonds had grit when the small group of marchers was surrounded by angry counter-demonstrators. 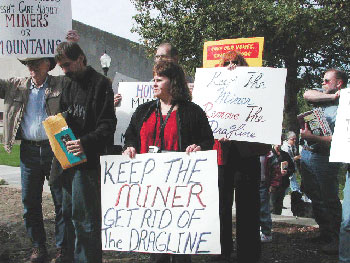 Judy Bonds (center) at a protest against mountaintop removal
at the West Virginia State Capitol in 2002.
(Photo: Vivian Stockman, OVEC)

HECHLER: We were attacked by a group of toughs. And I looked over and I saw Judy Bonds, and she had a look of great determination on her face. I started out being scared, and then terrified, but I got inspired by her courage.

YOUNG: Many of those counter-demonstrators were coal miners. Bonds realized she needed to reach out to miners who saw her work as a threat to theirs. The United Mine Workers of America fights many of the things conservationists want, including restrictions on mountaintop removal. But union representative Mike Caputo says he was able to work with Bonds' group on some issues.

CAPUTO: The bridge was built by Judy when we sat down and chatted with her, and spoke quite frankly that there's going to be issues that were probably going to be at odds on them, maybe might even be fighting each other at one time or another. But we've seen some common ground there, and we've seen that there are many, many issues that we can join hands on. And Judy helped develop that relationship.

YOUNG: Bonds and Caputo fought for better regulation of overweight coal trucks, and the union helped her point out the poor environmental record at many non-union mines. Bonds is proud of the headway she's made with the union and with state regulators. But it's hard to point to solid victories. Coalfield residents twice won major court cases limiting mountaintop removal, only to have both rulings overturned. And the Bush administration is changing federal rules to allow mines to dump rock and dirt in streams.

But if Bonds grows discouraged, she returns to the stream at Marfork Hollow to remind herself what she's working for.

YOUNG: A rumbling truck brings her back to the present, and a coal company security guard approaches.

SECURITY GUARD: Can I help you?

BONDS: I was just here looking at where I used to live at. I just come up to look. I haven't been here for a while.

SECURITY GUARD: The only thing we ask now is you get hazard trained, because this is coal company property...

YOUNG: Bonds asks the guard if he heard spring peepers sing this year, or the hoot owl that roosted in the walnut tree her father planted. Soon the two are talking about wildflowers and black bears. Judy Bonds is back to work in her own subtle way, building bridges wherever she can.