One Silo at a Time

Citizens in Takoma Park, Maryland are battling global warming at home. Anna Solomon-Greenbaum reports on one city’s efforts to cool the planet.

CURWOOD: Global warming, as its term implies, is a global problem. And to address it, most scientists agree action must be taken on a global scale. The international agreement to combat climate change is the Kyoto Protocol. The United States is not taking part in the treaty, but efforts are underway here to curb greenhouse gas emissions. As part of an occasional series on how individual citizens are responding to climate change, Anna Solomon-Greenbaum has this story.

SOLOMON-GREENBAUM: Just outside Washington, D.C., down at the public works compound in Takoma Park, Maryland, a few dozen people are watching their mayor cut a wide red ribbon to celebrate the town’s newest equipment.

SOLOMON-GREENBAUM: It’s not a new dump truck they’re cheering. It’s taller and shinier than that. It’s a brand-new silver silo filled with 21 tons of corn, sticking two stories up into the clear, cold sky.

SOLOMON-GREENBAUM: Eric Brown is one of ten Takoma residents who will burn that corn to heat their homes this winter. The corn kernels, he says, are clean, cheap, and warm.

BROWN: You know, they say that environmentalists, they’re the type who shiver in the dark and knit sweaters out of old mopheads. And boy, does this put the lie to that.

SOLOMON-GREENBAUM: Standing nearby, Ashley Flora looks up at the silo. She and her husband just bought a corn stove last week. 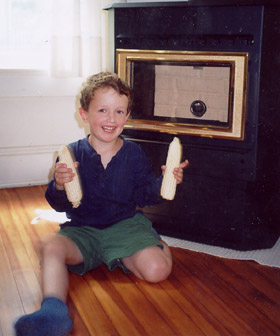 Mike Tidwell’s son, Sasha, with corncobs in front of the corn-burning stove. (Photo: Mike Tidwell)
FLORA: The heat is very pleasant, it’s pretty to look at, and it’s nice to be doing something for the environment.

SOLOMON-GREENBAUM: And Flora says there might be indirect benefits.

FLORA: I told my husband, you know, congratulations, here’s your new exercise program. Our house is kind of up on a hill, so carting the corn up from the street up all the way to the stove, you know, who needs a gym membership? You’ve got corn to carry.

SOLOMON-GREENBAUM: One corn burner says his heat bill went from $1500 to $300 the year he switched from oil to corn. Others say they’re glad to be supporting the Maryland farmer who sells them the corn. He tries to farm it sustainably by using manure for fertilizer and letting the corn stalks compost back into the ground. Everyone says the silo will make burning corn more convenient.

[CORN KERNELS BEING POURED INTO BUCKET]

SOLOMON-GREENBAUM: Mike Tidwell squats below the silo and fills a bucket with corn. This is what he’ll do every couple weeks. Then he’ll drive it home.

TIDWELL: This is my house, come on in.

[CORN BEING POURED FROM BAG]

SOLOMON-GREENBAUM: He says even after factoring in the fossil fuel that’s used on the farm or in transport, corn is far cleaner than natural gas or oil. It emits only as much carbon dioxide as it absorbs while it grew.

TIDWELL: When this thing is full it will hold 75 pounds of corn and that will go a couple of days, two days….

SOLOMON-GREENBAUM: When Tidwell started burning corn last winter, he had to make frequent trips 40 miles out to the farm because he didn’t have enough storage space. He knew if he wanted corn-burning to spread, he’d have to bring the corn to the city. So he asked the stove’s manufacturer for a grant to purchase a silo.

TIDWELL: He saw the logic of that argument immediately and agreed to put the equivalent of a $3,000 grant toward the purchase of this.

SOLOMON-GREENBAUM: Takoma agreed to put the silo on its property. Then Tidwell ran into a problem he hadn’t foreseen.

TIDWELL: I started calling local insurance companies and they said – what? You’ve got a corn silo in an urban area and people are going to come and get corn? No, we never heard of that. We can’t insure something that we have no established risk pattern for.

SOLOMON-GREENBAUM: Ultimately, Tidwell and the other corn-burners gave the silo to the city and the city put the silo on its insurance plan. Tidwell formed a co-op so Takoma families could buy their corn in bulk, and now ten households own corn-burning stoves like his.

SOLOMON-GREENBAUM: Maryland is encouraging corn burning by waving the sales tax for residents who buy corn stoves. Still, each one costs about two grand and another few hundred to install. But Mike Tidwell thinks the long-term savings will win all sorts of people over, even outside of places like Takoma Park, which is known for its progressive politics.

TIDWELL: I would not have bought a corn stove to begin with or worked this hard to create a co-operative and have an urban corn silo if I thought that this was just going to stay here in Takoma Park. We are early adopters and I think we are showing that this is a good idea, that it’s practical, it can be integrated into a modern lifestyle, it can save you money, and oh, by the way, it helps stop global warming.

SOLOMON-GREENBAUM: Tidwell predicts the co-op will keep 100,000 pounds of CO2 out of the atmosphere over the next year and he expects many new members will join. There’s even room, he says, for a second silo.