Most people probably aren't aware that the honeybee is not native to the United States. But we do have about 4,000 native species of bees. And a group of researchers is out to convince farmers that providing habitat for them would reap economic benefit. Robin White reports from northern California.

CURWOOD: Bees pollinate crops worth billions of dollars each year and they help propagate wild plants as well. It's not just honeybees, a European import, that do this. There are also thousands of species of bees native to North America that work alongside honeybees to pollinate flowers. But some researchers say native bees are not getting enough buzz for the work they do. Robin White reports from the agricultural heartland of Northern California on an attempt to give native bees their due and make space for them on farms.

WHITE: The Capay Valley, about seventy miles from San Francisco, is a little piece of paradise chock full of organic farms.

[SOUNDS OF PEOPLE TALKING IN SPANISH]

WHITE: At the Full Belly Farm it's harvest season in the tomato fields and the shoulder high plants are heavy with red, yellow and green fruit. Farm laborers work the rows dropping tomatoes into buckets.

WHITE: It seems like for every plant there are a couple of bees buzzing around. Princeton University bee researcher Sarah Smith is out checking on them. She points out that it's not honeybees but bumblebees that are doing the work.

SMITH: Honeybees can't pollinate tomatoes. The pollen in a tomato flower is stuck up tight inside the flower.

WHITE: But bumblebees have a little trick to get the pollen out.

SMITH: Some kinds of bees do what's called "buzz pollination," and they buzz their wings in a special way to vibrate with the frequency of middle C, and that releases the pollen.

WHITE: Yes, you heard correctly, the frequency of middle C. The bumblebee is one of two American native bees that can do it. They grab onto the flower with their legs, bite the end of the flower tube with their mouths and buzz their wings as if their lives depended on it. To show how it works, Smith pulls out a tuning fork. 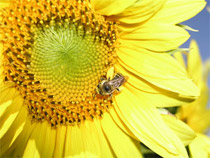 A native bee (Mellisodes sp.) foraging on a sunflower. (Credit: Sarah S. Greenleaf, 2003.)
SMITH: You buzz the flower with a tuning fork and you can see the pollen coming out – it’s pale yellow.

WHITE: That is incredible!

WHITE: The flower releases what looks like a small puff of yellow smoke. It's pollen, and it's what the bumblebees take home to their nests, but only after pollinating the tomato plants. Smith says tomato yields increase four-fold when bumblebees are present. She's part of a team that's researching the free contribution native bees make to agriculture. And it's not just bumblebees. There are carpenter bees, digger bees, mason bees, sweat bees. There may be up to 4,000 species of native bees that can pollinate crops.

On another part of the farm Princeton researcher Claire Kremen, who oversees the study, is looking at a bee the size of a large ant flying into a pink blackberry flower.

KREMEN: This little bee here is a dialictus species. See how teeny it is? And on watermelon, for example, every time it visits it deposits not more than ten grains of pollen. But when visited many times by a little, tiny dialictus bee it adds up.

WHITE: Kremen's trying to find out what it adds up to.

KREMEN: Scientists have recognized for a long time that natural ecosystems provide valuable services to humanity, but the problem is that we don’t know what the actual dollar values of these services are in many cases.

WHITE: About 75 percent of crops need pollination. Farmers can pay beekeepers to truck in honeybees to do the job. It costs about $45 a hive and a field might need dozens of hives depending on the crop. But not so if your farm has habitat suitable for native bees. Kremen says farms that are close to wild land often have enough native bees to meet all the farmer's pollination needs.

WHITE: At Full Belly Farm it's not an accident that there are plenty of native bees around. Organic farmer Paul Muller works hard to grow not only plants but also insects.

MULLER: We have divided our farm into places where we can grow clover underneath our trees. We can have some weedy areas. It’s interesting, in weedy borders you can grow a tremendous number of insects.

WHITE: The weeds create continuous blooms so that bees and other beneficial insects always have nectar. The weedy borders don't look neat and tidy – this farm is a rambling mess – but it's alive with buzzing. Muller's been watching the ups and downs of the bees for the last two decades.

MULLER: We saw a general decline in honeybee population for a while and the bumblebees seemed to be more much more prominent in our system. Whether that was just a cycle that the bee population was going through we don't know.

WHITE: In fact, non-native honeybees have been in steady decline for 50 years. Blood-sucking mites have wreaked havoc on their population. And the arrival of the so-called killer bees in border states has scared off some beekeepers. So farmers have an eye out for alternatives.

Kremen's team has already found that native bees don't occur naturally on farms that are far from wild land. But they're looking to see if they can re-introduce bumblebees by using wooden boxes that imitate abandoned rodent nests where the bees usually live. To see how they're doing the researchers trek out in the middle of the night when the bees are more docile.

WHITE: It's warm and the smell of fresh hay is in the air. At the edge of an orchard tree people huddle around a folding table. They open the square bumblebee boxes. Researcher Neal Williams describes what's inside.

WILLIAMS: You’re seeing a mass of small lumps that are whitish-yellow which are cocoons, and larvae in big masses around, and some open little pot-shaped things that have a glistening substance at the bottom which is actually the nectar.

WHITE: The researchers take out the bees and place each one in a vial. When they've counted them it's a race to get the now angry bees back in the colony as quickly as possible.

SMITH: I'm going to go ahead and put these queens back in now. You can hear them buzzing quite loudly. [BUZZING GETTING PROGRESSIVELY LOUDER] They're very large bees.

WHITE: The researchers are finding that bumblebee colonies placed on conventional farms don't grow as fast or get as big as those on organic farms. So Kremen is trying to persuade conventional farmers to make their land more bee friendly by using pesticides more carefully. She's also encouraging them to plant bee habitat such as hedgerows and large swaths of native plants that provide a year round source of nectar for bees.

One of the farms Kremen has been studying is run by Rick Rominger. It's a mix of conventional and organic fields. Today, Kremen's telling Rominger her idea for creating wildlife corridors for bees. She imagines stepping stones of bee habitat across the landscape.

KREMEN: And probably the more patches the better, for both nesting and foraging habitat and also to sort of deliver the bees close to where you want them to be operating.

ROMINGER: It's interesting. I guess, as a farmer I'd probably ask a real specific question like do they want a bank, do they want a certain amount of cover?

WHITE: Kremen tells Rominger that one bee they have studied, the svastra, is ten times better at pollinating than the honeybee. The numbers catch the farmer's attention – he grows sunflowers for seed. But to create the kind of habitat the bees need would take a cash investment.

ROMINGER: You like to think in the long term, but in our business if we trip this year we won't be here next year. And it's hard to say I'll spend a bunch of money this year and ten years down the road it'll be great. Well, it may not quite work out [LAUGHTER].

WHITE: Advocates say there are multiple payoffs for creating bee habitat on the farm. Hedgerows harbor a range of beneficial insects that keep pests under control and can help reduce pesticide costs. Hedges might also provide new wildcrafted crops such as blackberries or rose hips. But the reality is that most farming in this country is done by big business which may not be as open to change compared to small farmers. And agribusiness will probably need hard data first. So Kremen and her team say they'll go on counting bees looking for the commercial argument which will persuade even the bean-counters that re-wilding the farm is a good idea. For Living on Earth, I'm Robin White in Capay Valley, northern California

SMITH: It’s in my shirt. I’ve got to get rid of the vial.


A slideshow of bees