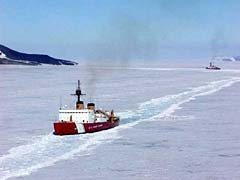 Icebreakers are huge ships that can cut through ice up to twenty feet thick. They're crucial for science research, national security, and economic protection of the U.S. Arctic Territory. But the fleet’s in trouble. Host Bruce Gellerman talks with Anita Jones, an engineering professor at the University of Virginia who chaired a committee on the future of U.S. Polar Icebreakers.

GELLERMAN: From the Jennifer and Ted Stanley Studios in Somerville, Massachusetts - this is Living on Earth. I’m Bruce Gellerman.

Icebreakers are incredible ships. They can smash through 20 feet of solid ice, freeing channels in the frozen waters of the North and South Poles. The powerful vessels enable supply and research ships to reach the ends of the Earth, and they’re vital for national security. But while the United States has three icebreakers, only two actually work and they’re old and need to be replaced. That’s according to a recently released report by the National Research Council.

Anita Jones is professor of engineering and applied science at the University of Virginia, and chairperson of the subcommittee that prepared the Congressionally mandated report. She joins me on the line. Thank you very much, Professor.

GELLERMAN: We have just three polar icebreakers? I was really surprised to learn that.

JONES: Just three, and these are ships that only operate about 200 days a year because, unlike most ships, they deliberately ram into hard objects.

GELLERMAN: So, how is it that only two of them actually work?

JONES: Two of the three, the most capable of the three, were built about thirty years ago. And so they are both at the end of their service life as planned. One of them has recently had some maintenance done so that it can be maintained in mission-capable condition but the other is sitting in caretaker status at the dock in Seattle.

GELLERMAN: So, we’ve got two icebreakers, they are very old. What are the plans? Or what is your report suggesting that we should do?

JONES: Congress asked the National Academies to look at this issue of what in the current time and in the future are the needs for ice breaking. And this report is an answer to that question, an answer to Congress.

GELLERMAN: But why are they asking this question now when they knew thirty years ago that these things had a life span of thirty years?

JONES: Bruce, it would have been better to address this problem in the early nineties but that didn’t happen. We now have a crisis and the nation needs to address the problem now.

GELLERMAN: Why is it important that the United States have icebreakers? 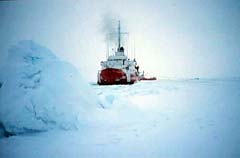 An Arctic icebreaker. (Photo: Courtesy of FOCI at NOAA / PMEL)

JONES: Oh, there are many reasons. The icebreakers are multi-mission ships and they address several really important missions. One of those is protection of our economic interests. As the ice is retreating in the summer in the Arctic, there promises to be much more shipping moving through the northern latitudes because if one can move, for example, oil from one side of a continent, either Russia or the United States, to the other side by going to the north, it is much shorter than going either through the Suez Canal or the Panama Canal. That’s the same for cargo because the ice is retreating, the fishing fleets are moving north as the schools of fish do. We have increasing economic exploitation of natural resources in the Alaskan area. We are drilling for oil there, we mine minerals in the Alaskan Territory and the ships are designed to not just break ice but to be science platforms, and they are used in both polar regions for that. So there are many reasons.

GELLERMAN: Now, I know from seeing pictures of icebreakers, I think we all have, you know, have seen them plow through the ice and it’s usually to deliver supplies. But your report suggests and says that these are vital for national security. How is that?

JONES: The national security issue arises in the Arctic. The U.S. is one of eight arctic nations. We have territory, namely Alaska. We actually have an air force base in Thule, Greenland which is in the arctic area. The U.S. needs to be able to protect its territory wherever it is. I think, at this point, the issues are less national security, although that is always a concern of this nation, but law enforcement, economic protection, and environmental protection of the area.

GELLERMAN: Do icebreakers do any damage to the polar region?

JONES: The short answer is no. 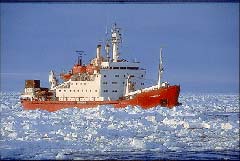 An icebreaker needs an ice-strengthened hull, an ice clearing shape, and the power to push through solid ice in order to be classified as an “Icebreaker.” (Photo: Courtesy of NOAA)

JONES: They break the ice and this is a minor incursion. It does not pollute. It is sometimes unfortunate for them, it is not permanent, the ice starts freezing back as soon as it’s broken if the climate conditions are right for that.

GELLERMAN: I understand that being aboard one of these icebreakers is a pretty miserable experience even when they are not going through ice because they don’t have a keel and so that they’re not very steady in the water.

JONES: They don’t have good sea-keeping properties when they are designed to be the best at icebreaking. So, they are more difficult to ride. There is a lot of new technology. For example, they have something called a double-acting hull where if the ship is going in one direction, the hull is good for ice breaking. When the ship is going the other direction, the other hull is good for sea-keeping, for traversing open water. So there is new technology that makes it much more attractive to build new ships rather than re-outfit, upgrade our older ships.

GELLERMAN: These icebreakers are very expensive. What is the going price for your basic Antarctic icebreaker?

JONES: It is roughly going to cost half a billion dollars to build a new icebreaker of the large size that the Coast Guard now needs.

GELLERMAN: Well, how badly do we need a large icebreaker?

JONES: Well, I think we need it critically. The United States needs to be able to project an active and influential presence in two polar regions that are very far apart. And our committee looked at this and even with the dramatically increasing needs in the Arctic because of the increased commercial traffic, resource exploration, increased tourism by the way, you need to have several ships and the ships need, in some cases, to be having routine maintenance because they are treated very harshly by the ice. And so the committee believes that it is quite urgent to actually replace the two larger ships, the Polar Star and the Polar Sea. We don’t think we need to increase the fleet because new technology allows a ship of the future to do more than the ships that we have today.

GELLERMAN: Professor, thank you very much.