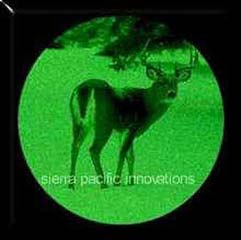 That deer crossing the road up ahead will be visible even earlier, thanks to advancements in night-vision technology in cars. (Courtesy of NASA)

There’s new technology that improves night vision for late night car drivers. The technology uses infrared bulbs mounted next to car headlights that reflect off objects ahead of the car. But we’re still in the dark as to whether the technology will catch on. Willie D. Jones of IEEE Spectrum Radio reports.

GELLERMAN: It’s Living on Earth. I’m Bruce Gellerman. Some twenty percent of all fatal crashes in the United States occur when just three percent of cars are on the roads. That’s between midnight and 6 a.m. Some carmakers think they have a solution to this nighttime hazard. IEEE Spectrum’s Willie D. Jones has our story.

[SOUND OF CARS PASSING AT HIGHWAY SPEEDS]
JONES: Maybe you’ve seen night vision goggles on TV news or in the movies. Now this military technology is being borrowed by car manufacturers. The technology that allows soldiers to pick out targets at night will improve civilian drivers’ chances of spotting hazards like pedestrians, deer, or disabled vehicles after dark. Mercedes-Benz and BMW are offering night vision systems, which add two or three thousand dollars to the sticker price of their top-of-the-line models, this year.
WOLFRAM: Night Vision allows the driver of the vehicle to see in difficult driving conditions such as night or fog, further than the human eye would possibly be able to see.

That deer crossing the road up ahead will be visible even earlier, thanks to advancements in night-vision technology in cars. (Photo: Courtesy of NASA)

WOLFRAM: You can almost describe it like you’re driving like your high beams are on. Obviously, you can’t drive with your high beams on all the time because you would blind the traffic. So, therefore, that’s not possible.

JONES: Night Vision extends the driver’s visual acuity by detecting energy in a portion of the spectrum that humans can’t see and translating it into visible images.

WOLFRAM: For example, in so-called near infrared Night Vision systems, special bulbs mounted next to the standard headlights emit infrared light that reflects off objects ahead of a car. A sensor, like to the ones used in digital video cameras, picks up the reflections from its perch behind the rearview mirror and image processors translate it into a format that can be viewed on a black-and-white head-up display in the instrument panel behind the steering wheel, or in the center console.

JONES: From the driver’s perspective, the main difference between Night Vision and conventional headlights is that warm objects appear much brighter than cooler objects.

WOLFRAM: Human bodies, animals like a deer or so, would really stand out in the image versus a tree or the road, or the countryside.

JONES: But not everyone thinks Night Vision in cars makes sense. Marc Green is a professor of ophthalmology at West Virginia University whose research focuses on perception, attention, and reaction time.

GREEN: I have doubts about how much good the Night Vision aids are going to be. They remove cues like variations in texture, brightness. And they accent and highlight various aspects of the scene which are likely to draw a driver’s attention and which might be irrelevant to driving. The Night Vision set up is going to possibly prevent them from using these cues to help them steer the car.

GREEN: If people perceive that Night Vision helps them and that there is less risk in driving, they’re going to take more risks, because whenever people feel safer, they tend to compensate by taking more risk.

WOLFRAM: It’s really additional information for the driver who ultimately has to make the decisions and, obviously, is ultimately in charge of his vehicle.

JONES: So, I asked a few New York drivers what they thought about Night Vision technology.

WOMAN: I have really bad night vision and I think it would really help me.

MAN: There’s enough gadgets in the car today where people don’t pay attention to the road. That’s all they need is another gadget.

WOMAN: Is it totally necessary? Why would they need night vision in cars?

WOMAN: People do stupid things. They would take extra risks and say ‘well, now because I have this safety feature, I could take these risks because I’ll be alerted.’

JONES: But the real test may be whether consumers will plunk down an extra two or three thousand dollars for Night Vision driving technology. And whether it proves to be as valuable, and widely accepted, as seatbelts and airbags in years to come. For Living on Earth, I’m Willie D. Jones.