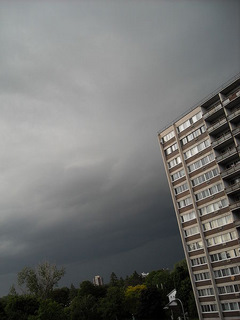 A new study finds that some clouds could make our warming world even warmer. But scientists have had a difficult time understanding the nebulous nature of clouds, and only one climate change model has been able to reproduce the results of the recent findings. Lead author Amy Clement talks with host Jeff Young about what clouds could mean for our end-of the-century forecast.

Ralph Waldo Emerson once compared nature to “a mutable cloud, always and never the same.”

Climate scientists trying to understand how nature is changing with global warming find clouds a crucial and frustrating part of the picture. Could clouds get thicker and perhaps offset warming? Or shrink and add to the warming cycle?

A new study on clouds published in the journal, Science, clears things up a bit. And the findings have big implications for just how hot the planet might get. Amy Clement is a co-author. She’s a professor of meteorology and physical oceanography at the University of Miami.

Professor Clement started with decades of data about low-lying clouds over a part of the Pacific. 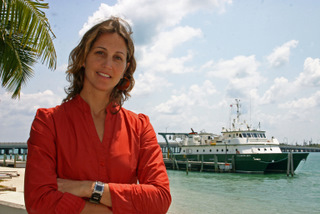 CLEMENT: Well these clouds have a particularly strong effect on the climate system. They’re close to the ground so they don’t have much of a greenhouse effect. In other words, they don’t trap a lot of the heat that the earth is radiating to space. But they’re very highly reflective, and so, as a result, they actually cool the climate.

YOUNG: So they’re reflecting some sunlight back up towards space, but they’re not acting like a blanket like some clouds do.

YOUNG: How do you go about studying clouds? I mean they’re pretty ephemeral things.

CLEMENT: There are two ways of looking at clouds: from below and from above. Sailors have been making measurements of clouds looking up at the sky, determining what fraction of the sky is clouded and writing those down and reporting them back to a centralized archive. And then another way to look at clouds is from satellites. So satellites send down information from the atmosphere in the form of numbers basically, and those numbers are converted into a cloud faction that can then be compared with what a surface observer sees. 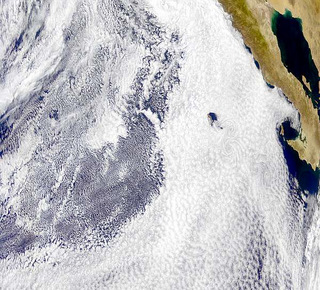 Clouds from above: low-level clouds cover the Pacific off the coast of Baja California, helping cool the climate. (Courtesy of NASA)

YOUNG: Now a few scientists theorize that clouds might work the other direction – it’s gonna make things cooler. What does your report say about that?

CLEMENT: Well, it’s always possible that they might be right, but the onus is on them to show that there’s an observational support for that happening. Right now the only observational support we have is that as the surface warms, this low cloud cover decreases. And until someone can show the opposite, then we don’t really have any reason to reject that hypothesis.

YOUNG: So what’s going on here with the ocean getting warmer, the cloud cover getting thinner, more sunlight getting down to the ocean and it getting even warmer – it’s kind of a vicious cycle.

YOUNG: This does not sound good.

CLEMENT: It’s not. You know there are lots of different processes that operate in the climate system. So this is not the only one, but it does seem to indicate that clouds are an important factor in climate warming.

YOUNG: So what is this mean as we project things forward and we anticipate a more carbon dioxide and greenhouse gases in the atmosphere, more warming – what’s gonna happen? 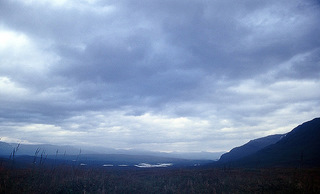 They might not be pretty, but low-level stratiform clouds help keep the climate cool.(Photo: Andreas Christen)

CLEMENT: Well that’s the kind of thing that you would want to do with a climate model. So using the observations we then went and tested climate models to see if any of the 18 models that we used that had participated in the IPCC, the Intergovernmental Panel on Climate Change, report that came out in 2007 – if any of those models reproduced these fluctuations. And of the 18 models only one was able to reproduce these cloud fluctuations for the past.

CLEMENT: Yeah. And that one – I don’t think it’s a fluke that it was that one. This is the Hadley Centre model from the UK Met Office. They’ve spent a lot of time and effort trying to provide a better representation of the lower part of the atmosphere where these clouds lie.

YOUNG: And what kind of projections does that model generally give us?

YOUNG: They’re the ones at the upper end of that range.

CLEMENT: The largest amount of warming of any of the models.

YOUNG: And they’re the only ones that got the clouds right.

YOUNG: What does this tell us about what part of that range of predictions from models we should really be looking at?

CLEMENT: I think we need to accept the possibility that that top end is not a fluke, that there might be real physical processes that can drive the climate system to that high end of the warming range. The climate system – it’s sensitive. And if we tweak it, we might be looking at a future that’s very different from what we’ve experienced in the rest of human history.

YOUNG: Amy Clement is a Professor of meteorology and physical oceanography and the University of Miami. Thank you very much.

CLEMENT: Thank you very much.


Read the study in the journal Science (subscription required).

To learn more about the Hadley Center’s projections, click here.