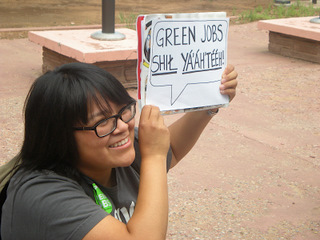 The Navajo are looking for alternatives to the fossil-fuel based economy that has dominated its reservation for decades, and left it with a 50 percent unemployment rate. Thee Navajo Nation Council recently voted in support of green jobs, legislation Wahleah Johns worked to promote. She's co-director of the non-profit Black Mesa Water Coalition, and she talks with host Jeff Young about the past and future of her nation.

YOUNG: In the Southwest, the Navajo have long allowed mining on their reservation.
Now they’re looking for alternatives.

The Navajo Nation Council is the first tribal government to approve green jobs legislation. It will support renewable energy and energy efficiency and sustainable manufacturing and agriculture based on the tribe’s traditional methods. 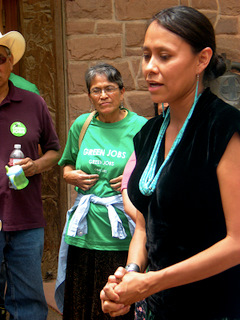 JOHNS: We’re very excited about the Navajo Nation passing this legislation. We have people that are ready to be trained in weatherization programs, putting solar panels on rooftops and given our communities being ranchers and farmers, we are looking to support families who are planning textile mill, ‘cause we have a lot of people who raise sheep.

We can use that wool to make carpets and sustainable fashion. People who are raising organic meats and foods to do gourmet foods. So this green jobs plan can help our people and individual families who do this work already but don’t have a marketing mechanism.

JOHNS: Yeah, I mean, this green initiative it’s really supporting, you know, these ancient ways of living as a Native people. And it’s all based on our community’s needs.

And so I think each community – it’s up to them to decide what kind of development they want, which is different than how economic development has been in the past where what happens in our backyard is dealt with the governments and the corporations. 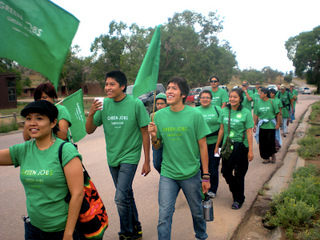 Activists march to the Navajo Nation Council Chambers to urge their representatives to vote for the green jobs legislation. (Courtesy of Black Mesa Water Coalition)

With this initiative it’s really trying to plant the seed so we are self-sufficient and we are trying to stabilize our economies.

YOUNG: Tell me a bit about the economic picture for the Navajo Nation. I read somewhere that the unemployment rate hovers around fifty percent?

JOHNS: Yup, about 54 percent. Most Native nations, it goes as high as ninety percent. I mean this is – we’ve been in the Great Depression for a very long time. [laughs]

And so that’s what we have to work with and that’s something that, you know, for me being of a younger generation and going to school and then coming back to my community, there’s little job opportunities at home.

The Navajo Council discussing the green economy legislation, which it approved by a vote of 62-1.(Courtesy of the Black Mesa Water Coalition)

There’s a whole missing generation. Once you hit eighteen to about forty five years old, I mean, that generation is outside the reservation because they have to work.

You know, its frustrating to see like my uncles and my cousin brothers they are iron workers or construction workers and they have to drive to Los Angeles, Las Vegas for employment. And that’s like anywhere from a six to a twelve hour drive for them. And they come back every weekend to see their families. So I hope with this initiative that we can bring our young people back to work closer to home.

YOUNG: You grew up in the coal mining area there. Black Mesa is long been an area with a lot of coal mining. How did that affect your outlook on this?

JOHNS: You know, it’s been a challenge because that’s the largest coal strip mine up there, that Peabody Coal Company has been operating for over 30 years. And the fact that, you know, we’ve supplied the southwest with their electrical needs for over 30 years, and yet nothing has really come back to our communities.

We still have no running water. We don’t have electricity. So being a younger person and understanding the history of the deals that happened been the government and corporation, I feel like it’s my responsibility to really try to plant a seed that is gonna be good for our communities and bring healing again. 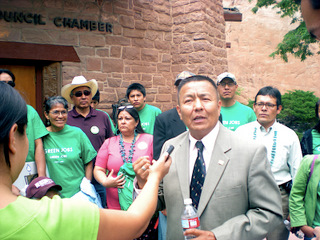 James Davis, chief of staff for the speaker of the Council, speaks to green jobs supporters after the legislation was approved. (Courtesy of Black Mesa Water Coalition)

YOUNG: Do you forsee a day when the Navajo Nation and in particular Black Mesa might be thought of as “oh yeah, that’s the place where they make green energy?”

JOHNS: Yeah, I mean that’s my goal. And using those lands that have been reclaimed after mining for something maybe a sustainability school or, you know, potential solar farm. You know, there’re so many opportunities that we can make of that land that has been used for mining.

But it’s not easy because Peabody Coal Company was given another permit December of 2008 to mine more coal. You know, that still hurts me, because Black Mesa to me is my mother. And I need my mother to be healthy and so future generations can have a good life there.

YOUNG: Now how old are you?

YOUNG: And I’m guessing that the chief organizers of this movement were your age and younger, yeah? 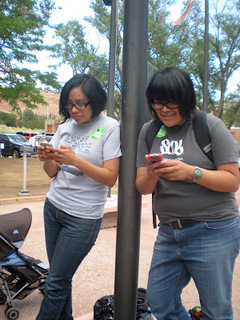 YOUNG: What does that tell us about what’s going on with the Navajo Nation that we have a younger generation expressing a desire to take a markedly different direction with your energy future?

JOHNS: I mean there was a lot of young people involved, but there was also a lot of older folks. When we go to our communities it is mostly elders that are in our communities. And to be able to interact with them and talk about, you know, this initiative, they really understand it. They know, you know, what green living is about. [Laughs] So it’s not so much telling them like “This is the way you need to do it.”

YOUNG: Wahlean Johns is co-director for the Black Mesa Water Coalition. Thanks very much.

The Navajo Nation Council on the legislation.