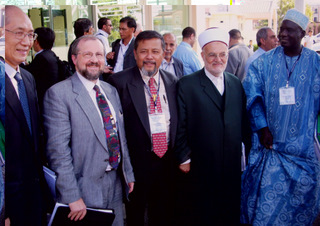 Green is the color of the conservation movement, and the traditional color of Islam. At a recent conference in Istanbul, Islamic scholars from all over the Muslim world gathered under an especially green banner to talk about climate change. Mahmoud Akef (MAHMOOD AKEEF) organized the conference, and talks with Jeff Young about the seven year Muslim Action Plan on global warming, which sets out to green the Hajj, boost awareness, and create an eco-Islamic label for products.

Green is of course the color of the conservation movement - it’s also the color of Islam. Islamic scholars gathered in Istanbul recently to blend those two shades of green with a seven-year action plan on global warming.

AKEF - We believe that all of us, all of us, not just Muslims, Muslims, Christians, Jews, everybody lives on this earth, we are in the same boat, so we have to care about this earth. All of us.

YOUNG: That’s Mahmoud Akef whose non-profit Earth Mates Dialogue Centre organized the action plan. Goals include climate change education, green cities and the grand mufti of Egypt even pledged to make his fatwa-issuing office in Cairo carbon-neutral. Mahmoud Akef says the inspiration comes from Islam’s sacred texts, the Koran, and the Hadith, the sayings of the Prophet Muhammad. 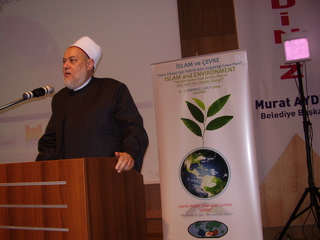 YOUNG: And then there’s another one that says that essentially you should treat a – do I understand this correctly – a palm tree as if it is your aunt? Is that right?

AKEF: You should respect your aunt, of course.

AKEF: So if you look at it as your aunt you have feeling. This is very important. You should have respect and admire the environment.

AKEF: This is what Islam and prophet Muhammad ask us to do.

YOUNG: Now you convened this conference in Istanbul to talk about the issue and come up with a plan of action. Tell me a couple of specific action items here. I read I think one where there’s a recommendation for essentially a green seal of approval, a label, that would be placed on products.

AKEF: Yes. What we call the Islamic label for products which is produced through an environmental friendly ways. And we call this tayba. Tayba means like Halal, like label putting on the food.

YOUNG: Right that it was processed in a proper way.

YOUNG: And who would give this seal of approval? Who would decide?

AKEF: And this organization would be responsible for implementing the plan.

YOUNG: And that acronym sounds a lot like Mecca, the holy site.

AKEF: Yeah, of course, we try to do sounding very similar. That means this organization coming from an Islamic principle, you know, and Islamic values.

YOUNG: Any plans for a green Hajj to reduce the carbon footprint of one’s trip to Mecca?

AKEF: Yes, we already discuss it with some people and they thought of this. And we are going to start with what we call [speaking Arabic] which is – it’s smaller than the Hajj. Cause in the Hajj are more than three, four million people attending the same place at the same time.

AKEF: So this is what we are working on now. And not only when they go to the holy places, but also when they go back to their countries, they will start teaching the other people.

YOUNG: Yeah, that’s a real moment of opportunity isn’t it? Because when people undertake the pilgrimage, they’re about, you know, renewing of their faith and this is a guess what we call a teachable moment, right?

AKEF: Yeah, and the potential is huge, huh? More than 1.3 billions of people around the world believe these values and this principle and if they can implement this actions, I think it will help the whole earth, you know. Because the climate change – it will affect all of us.

AKEF: So we should take care of this challenge. There is a hadith also if you feel the Day of Judgment is coming and you have a seedling in your hand, you should plant it.

YOUNG: Even if you think the Day of Judgment is coming you should plant a seedling?

YOUNG: So even though things might look hopeless – still do something to make it better?

AKEF: Uh-huh, yes. If you feel it will not help – but you should do it. And we believe that all of us, we have to save this Earth.

YOUNG: Mr. Mahmoud Akef is founder and director of the non-profit organization Earth Mates Dialogue Centre. Thank you very much.

AKEF: Thank you. Thank you so much.


To read the declaration from the Istanbul conference, click here.

Click here to learn about conservation efforts of religious groups.