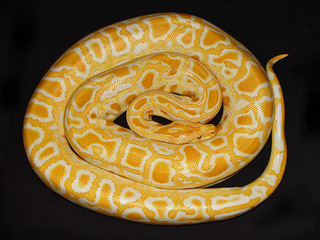 The Florida Everglades might be known for alligators and crocodiles, but there’s another reptile snaking through those wetlands: the Burmese python. The Burmese python has become well established in the Everglades, even though it doesn’t belong there. Secretary of the Interior Ken Salazar recently announced plans to advance a python eradication program. He’s calling on licensed volunteers to hunt down and remove the estimated 100,000 pythons from the Everglades. Host Jeff Young talks with volunteer python hunter Greg Graziani.

And now for something completely different – pythons. Burmese pythons - in the Everglades.

This snake in the river of grass does not belong in South Florida. But it’s become a well established invasive species. Now state and federal wildlife officials are scaling up a python eradication program. They’re calling on volunteers to hunt down the snakes.

We called up one of those volunteers, Greg Graziani of Venus, Florida, who makes his living as a reptile breeder. Mr. Graziani says even though Burmese Pythons can get 20 feet long, they can be very hard to find.

GRAZIANI: Well, right now, as warm as it is they may spend a lot of time in thick brush during the day hiding because they’ve got enough heat, and that’s why we think the winter time is gonna be a better time for us. Now a lot of what we do throughout the rest of the summer will be a lot of nighttime hunts. And mainly we stick to the roads and levees because the snakes will be on the move crossing those and you’ll be able to see the animals. Unlike alligators, snakes’ eyes are very small and its not like we can go out there and spotlight ‘em and light the eyes up like people do with alligators with the reflection of the eyes. So snakes are gonna be much more difficult to find.

YOUNG: But you have managed to find at least one so far.

GRAZIANI: Yeah, as a matter of fact we took about four or five airboats out just to kinda show the press the terrain that we were dealing with. Myself and Sean Hefleck, one of the other hunters, was walking down a boardwalk and Sean was looking off to the right side of the boardwalk while I was watching the left side, which is when I spotted the tail of a Burmese python going under the boardwalk. So I immediately just dropped down on the snake and grabbed the snake by the tail before we could get under the boardwalk and Sean Hefleck jumped into the marsh right there and as I pulled the snake out we worked out way up until he was able to get the head under control and ended up pulling out a nine foot eight inch female Burmese python.

YOUNG: Holy cow. So let me get this straight – the hunting technique is you spend a lot of time trying to find a snake, and then when you find it you basically just jump in the swamp and wrestle the thing down?

GRAZIANI: Depending on the size. I mean a lot of times we just simply reach down and pick them up. They’re a very slow moving snake. They’re -

GRAZIANI: Yeah. That’s –and that’s you know about an average size Burmese python. I know it seems really spectacular, but when you’ve been doing this for over thirty years, its just another snake.

YOUNG: So tell me about your experience with snakes. How did you learn so much about snakes and what motivates you?

GRAZIANI: You know, I started when I was seven years old. I grew up in the city of Pembroke Pines down in Broward County Florida, which is very close to where this problem is occurring. And I was taking care of a neighbor’s house, bringing the mail in, feeding the cat, that type of stuff. And it was dusk one night, I went over and thought there was a big night crawler on the front porch. I really couldn’t see. I reached down and grabbed it, and it bit me. [Laughs] And from that point on it just intrigued me. I started getting into corn snakes as a youngster and anything that I could catch. In the late 80s I realized that people were breeding these things and it’s become a large market in the pet trade.

YOUNG: So you know the pet business pretty well. What’s the culpability there for these pythons ending up in the Everglades in the first place?

GRAZIANI: Well, there’s a lot of theories. Unfortunately some of the politicians have been really pounding it into people that, you know, irresponsible pet owners have let these animals lose. They really make it sound like people are driving down in droves to make sure their snakes can survive in the Everglades.

GRAZIANI: And we just don’t believe that to be true. There has not been a single documented case where they’ve actually caught anybody releasing snakes. And we believe the devastation of Hurricane Andrew is what released the population that we’re now having a problem with. And it seems that there has been a study done, a DNA study, that shows these animals are very closely related which would point to a single incident that put them out there at one time.

YOUNG: So, this might very well be yet another legacy of Hurricane Andrew.

YOUNG: And is it fun hunting snakes in the Everglades?

GRAZIANI: I think it’s extremely exciting. I mean, again, I wish they weren’t there. But very few people can go python hunting in the United States because they’re just not here.

YOUNG: Can this work? Can you possibly, you know, get rid of the pythons once they’ve become so well established in a place as wild and tough to penetrate as the Everglades?

The Burmese python, not native to the Florida Everglades. (Photo: Tambaka)

GRAZIANI: You know there’s a lot of theories on that. And what we want to find out because it is really not known at this point is, are these animals a serious threat to the ecosystem in the Everglades? Do we need to work on a total eradication? Do we simply need to work on controlling the population of these animals? Or are they not a problem at all? By doing the gut content and finding out which animals they’re eating and trying to do surveys on other animal populations out there, we’re gonna hopefully find out, you know, what we need to do and if our efforts are actually contributing to restoring the Everglades.

YOUNG: So, you say you’re checking the gut content of the snakes. Obviously when you catch them, you kill them, right?

GRAZIANI: Yeah. That is not something that as hunters and as python breeders that we particularly want to do. But it is part of the criteria for this program. Unfortunately that is the downside, as you know, a snake lover myself. Would I rather than somebody else handle the euthanization process, definitely. But, that’s just something we have to do.

YOUNG: As they say the grass is always greener on the other side, but commentator Pat Priest of Athens Georgia prefers what’s on her side of the fence.

PRIEST: My name was drawn at a raffle recently, and I learned I'd won a free month of tanning! As a teenager I would have been thrilled, but . . . now . . . in my fifties? I know better! I felt awkward turning it down, but then other people passed on it, too! We've learned to just say no to a cigarette, veal . . . and tanning.

But meanwhile, day after day, I watched a neighbor lay out about a half acre of new sod . . . sod! It looks pretty if you weed out thoughts of the water necessary to sustain it. Turf guzzles so much water that the city of Cary, North Carolina is among a growing number of places offering buy-back programs to homeowners who will rip it out.

A half-acre needs tens of thousands of gallons of water yearly. But the problems are more deeply rooted than simply conserving water. Perfect grass really is much like the perfect tan, which may look like a sign of robust health but more often is evidence of damaging practices.

The green, green grass of home is usually the result of pesticides and herbicides that kill creatures in nearby streams when storm water flushes out the toxins.

Fertilizers also damage aquatic environments and the mining of phosphate rock for fertilizer has poisoned the water in places as far flung as Idaho and Florida.

And what would ancient cultures think and those in the future for that matter, to see us walking around in circles mowing grass?

The Environmental Protection Agency estimates that lawn mowers use 800 million gallons of gas each year. And the emissions cause five percent of the air pollution in the US.

So this year I decided to cover over my grass. A friend helped me lay down recycled paper lawn bags.

We covered the paper with mulch made from invasive species such as privet and Russian olive. These layers will improve our hard clay soil. When it’s cooler, I’ll put in lots of native plants. They’re like a big “Welcome” sign for pollinators and other species whose habitat is disappearing.

To undo my lawn yard by yard was as labor intensive initially as my neighbor's sod laying. But I don’t need to mow or use chemicals now that I'm finished. My yard doesn’t look like a golf course, but it’s a safe haven for my family, dogs, and wildlife.

By undoing my lawn, I’m overturning convention and commonly held aesthetics to stave off the unraveling of the irreplaceable web of life on Earth.


Click here to learn more about the Interior Department’s plans.

For more information on the Burmese python, click here.