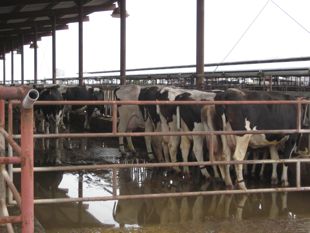 More than a hundred dairies across the U.S. are generating electricity from cow waste. (Photo: Amy Coombs)

Some dairy farmers are investing in machines that turn gases from cow poop into usable energy. The technology keeps potent climate change gases out of the atmosphere. But Amy Coombs reports some California farmers are getting into trouble with air pollution officials.

In recent years, many dairy farmers around the country have started capturing the gases from their cow manure, and converting them into energy.

Using this renewable resource saves money – and copes with a problem - a win-win solution.

But in the central valley of California, which has some of the worst air quality in the nation, these new methane digesters are sparking controversy. That's because they generate some pollution themselves. Amy Coombs has our story.

COOMBS: It has plenty of room for 1700 dairy cows to eat, drink and produce the stuff that green power is made of.

DRAKE: Instead of calling it waste, because of the negative connotation of that, we actually call it nutrient because it creates a very valuable product, and that would be the electricity and the heat that we use as a renewable resource.

COOMBS: Fiscalini just built a methane digester to convert cow manure into electricity. The farm hopes to make some 100,000 dollars a month by selling extra electricity back to the grid. The first step is collecting the cow nutrient.

[SOUND OF WATER MOVING THROUGH GATES]

DRAKE: The funny thing about the cows is that we’ve been able to train them to defecate in the area where they eat and that allows us to use water to collect the waste. 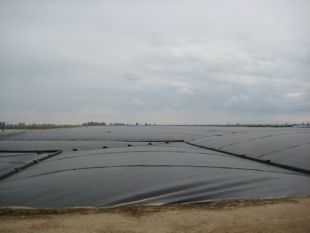 The "Ferrari" of methane generators can't be turned on because of emissions guidelines. (Photo: Amy Coombs)

COOMBS: A stream of water pushes the manure into an 8,000 gallon tub. There naturally occurring bacteria consume the waste and release methane.

COOMBS: That methane, when burned in a generator, would make enough power to run the entire farm, plus 600 homes. But Drake points to the bright orange Caterpillar engine sitting silent.

DRAKE: This is our big boy and unfortunately we cannot turn it on because they won’t let us.

COOMBS: San Joaquin Valley air officials have blocked the farm from turning on their manure digester until they install air pollution equipment. Air official Dave Warner says digesters like this one produce nitrogen oxide, or NOX, for short.

WARNER: Nitrogen Oxide is what’s known as a precursor to a couple of very important pollutants. Fine particulate matter, which when you breath in gets into your lungs and even your blood stream. It’s also a precursor to ozone pollution. Ozone pollution causes all kinds of respiratory problems from asthma to emphysema.

COOMBS: NOX is made during combustion. Just like your car needs oxygen from the air to ignite spark plugs, so do diary generators. The problem is that air also contains nitrogen, and after combustion, this leaves behind nitrogen oxides. Warner and his colleagues have been trying to reduce NOX by eight tons per day just to meet federal health standards. He says he'll be darned if he'll let these dairy machines set that effort back.

WARNER: I’ve called up a list of the dairies in the central region of the San Joaquin Valley and you can see it’s an extensive list. If every dairy that had the potential of installing this technology did so, they would create, according to our calculations, about five tons per day increase in nitrogen oxide emissions, virtually wiping out the eight tons per day reduction.

COOMBS: It’s a sticky issue. Dairy generators emit NOX. But they also reduce greenhouse gases. They prevent the greenhouse gas methane from being released. Methane is 20 times more powerful a greenhouse gas than carbon dioxide. Plus since digesters make renewable electricity, they reduce the need for dirty power, like that from coal. But Warner says climate change is out of his jurisdiction.

WARNER: The governing board of the air district has made it very clear that when these trade offs between green house gas emissions reductions and nitrous oxide increases are there in front of us, we are going to choose on the side of protecting the health of the people of the San Joaquin Valley.

COOMBS: So as of last January, most dairies had to add an extra device to their manure digesters to capture NOX.

COOMBS: At another nearby dairy, the Gallo Dairy, manager Carl Morris says that's been difficult.

[SOUNDS OF TINKERING WITH TOOLS]

COOMBS: He is replacing his eighth of these new pollution control devices. 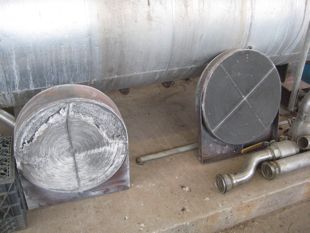 Regulators require pollution-capturing technology called catalytic controls, but dairy gas is hard on the system. The device on the right awaits installation. The Gallo Farms has burned through eight devices so far. (Photo: Amy Coombs)

MORRIS: This is one of the catalytic converters that burned up. It’s very damaged on this end, it’s kind of a honeycomb look, ashy and everything, it’s very thick. We got another catalytic converter that is thinner, but it didn’t fit well.

COOMBS: This farm had been making electricity from methane for five years. But ever since they installed the new pollution controls, their digester has been down.

COOMBS: The farm's manure piles up in a giant 7-acre pond. Carl Morris says you can actually walk on the pond, because it's covered by a thick black plastic tarp strong enough to hold our weight.

COOMBS: You can feel the methane bubbles pushing up underneath the plastic.

MORRIS: Once you get up here you are actually walking on the gas. There’s so much gas in this area that it’s supporting your weight.

MORRIS: We treat that gas and use it to power our generators, which produce 700KW of electricity. 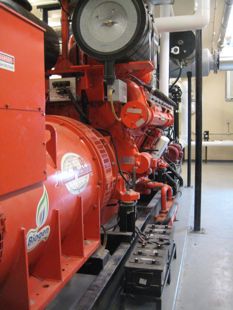 COOMBS: Or that's what they did before they had to shut the machine down. Three other dairies in the area have shut down their digesters too because they can’t afford to buy and fix the pollution controls. Permit requirements are delaying at least six others.

COOMBS: Back at the Fiscalini Farms, you can feel the tension. The owners thought they’d be earning money from their clean electricity months ago.

DRAKE: We have talked often about if we had known what we were getting into doing this project we would have never done it. And that’s sad.

COOMBS: The farm had to spend $100,000 for the device. That's after $3 million they paid for the manure generator.

DRAKE: The regulatory agencies that are requiring this don’t even know if the technology is going to work, it has not even been tested. Yet we were forced to spend the money putting it in.

COOMBS: San Joaquin air officials admit that all the kinks haven't been worked out in adapting the pollution controls to dairies. They were designed for designed for landfills and sewage treatment plants. But air official Dave Warner says the point is the Valley cannot afford any increases in NOX. One out of five children here takes an inhaler to school.

WARNER: We not going after dairies in any way – we are applying a very stringent rule to dairies just as we apply it to all other sources of air pollution in the San Joaquin Valley.

More than a hundred dairies across the US are generating electricity from cow waste. (Photo: Amy Coombs)

COOMBS: This may be one of the first conflicts in the country where those reducing greenhouse gases have run into trouble over traditional pollutants. Fortunately, manure power technology is expected to get cleaner over the next few years. For now the dairies say they'll just have to keep tinkering.

COOMBS: For Living on Earth, this is Amy Coombs in Modesto, California.