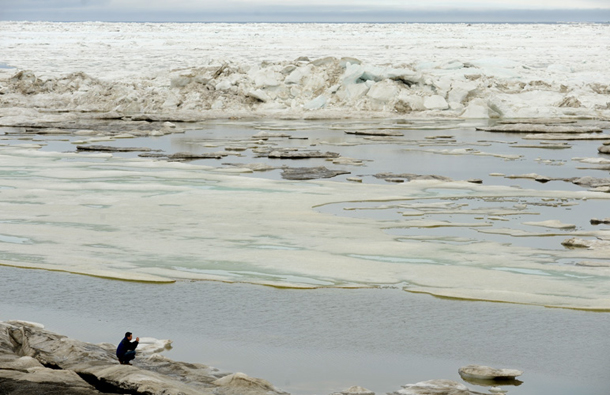 The melting Arctic sea ice has opened a passage to Iceland for a Chinese ice-breaker. Iceland's President, Ólafur Grímsson, tells host Steve Curwood why Chinese scientists see the disappearing ice as a threat as well as an opportunity.

CURWOOD: Environmental activists aren’t the only ones to see threats from fossil fuels in the Arctic; world leaders see threats as well as opportunities. A warming climate means that sea ice in the far north is melting faster than ever expected.

That was one of the topics under discussion at a recent summit, the Arctic Imperative summit in Alaska. The President of Iceland, Olafur Grimsson gave the keynote speech -
Welcome to Living on Earth, President Grimsson.

GRIMSSON: Good day, very nice to speak to you.

GRIMSSON: So at this conference we have great participation from Alaska—people from public life, from the indigenous communities, of the local communities as well as from the corporate world, plus people from the Canadian and the American forces, and I think all of this confirms the growing importance of the arctic.

CURWOOD: Let me ask you about a recent visit you had in Iceland from the Chinese icebreaker the Snow Dragon. As I understand it this is the first time that the Chinese have been able to send an icebreaker up through what is called by some the northwest passage—others the northeast passage—what was the significance of that trip? 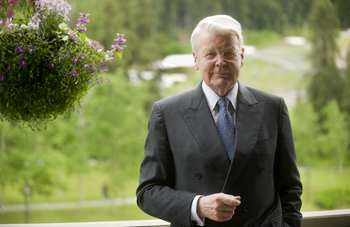 GRIMSSON: The opening up of the new sea routes which you mentioned, the northeast sea route which would in fact shorten the distance between China and Europe and China and the United States by about 40 percent, but the arrival of the Xuelong in Iceland also confirmed the interest of Chinese scientific community in the arctic. There were about 60 Chinese scientists from the Chinese Polar Institute. They explained how the melting of the ice in the arctic has a profound impact on the weather patterns in China, and on the agriculture, on the food production, the well being of the people in the city.

CURWOOD: What of those effects, of the changes in the arctic, on China, made the biggest impression on you? What’s a particular detail that caught your attention?

GRIMSSON: Well, if the Greenland ice sheet and the ice in Antarctica keeps on melting, this would raise sea levels to a certain extent that the seashore would move 400km inwards in China, and this would drown cities like Shanghai. It would make Beijing surrounded by seawater, and it was quite a dramatic presentation of the effect of climate change.

CURWOOD: These scientists obviously impressed you. What effects do you think they’re having at home, on their own policies? They’re still using a lot of coal, they’re still putting a lot of carbon into the atmosphere.

GRIMSSON: Well, of course they have an effect on that, but, let’s remember China is now already the leading producer and user of wind energy, of solar energy, and a few months ago, during the visit of the Prime Minister of China Wen Jiabao to Iceland, we signed an agreement for transforming the urban heating system in many Chinese cities, from coal to local, clean, geothermal resources—to do in China what we have done in Iceland.

So I think all of this is combined in a comprehensive view, which will make China, I believe, before the end of this decade, the leading clean energy country in the world. I know that sounds paradoxical to American ears, but I believe, based on these facts, that unless Europe and the United States get their act together in the field of clean energy, the question before the end of this decade will be: when will Europe and when will the US catch up with China in the field of clean energy?

CURWOOD: By the way, as I understand it, Iceland is carbon neutral?

GRIMSSON: We are 100 percent clean energy in terms of all electricity production and all space heating. And if we succeed in getting electric cars and all of the clean energy cars in the next five to ten years, we could become the first country where all land-based activity derives its strength from clean-energy sources.

And I think the story about Iceland is that it can be done. Because when I was young, over 80 percent of our energy came from imported oil and coal. So within the lifetime of one generation, we have moved from oil and coal over to clean energy. Just to give you an indication of the economic benefit of this, by moving from imported oil to heat our houses to local geothermal resources, we save every decade what amounts to one year’s gross national product.

CURWOOD: Wow. Wow, that’s impressive. Now, with ice coming out of the arctic, there’s a lot more drilling for hydrocarbons going on there—what threats to do you see from more drilling in the Arctic?

GRIMSSON: Well, I think everybody who studies drilling in the arctic is very much aware of how careful people have to be. And I think what is being planned here in Alaska and what is being done by Russia and Norway and other countries in the arctic in this respect, is based on a very strong scientific and environmental analysis. Because those who live close to the ice and off the ice—they are very much aware of what the risks are and how profoundly strong the weather patterns can become.

CURWOOD: I mean, how much sense does it make to be drilling for more hydrocarbons, when they are the problem with melting the Arctic?

GRIMSSON: Well, that is of course a very good question. But the problem is that for most people in the United States, in India, China, Europe, Latin America… for our everyday life, we require this fuel. So until other countries go the way of Iceland, reducing their reliance on this, there will be growing demand.

CURWOOD: Overall, how bad are things looking for the Arctic, for the ice regions of the world, from your perspective… from where you see, sitting as President of Iceland?

GRIMSSON: Well, first of all, all nations live in an ice-dependant world. What happens to the ice in the arctic, in the Himalayas, and in Antarctica will have a profound effect on every nation, on every continent. And the melting of the ice in the last four years has been much more dramatic than anybody predicted ten years ago. And therefore, we need all to be gravely concerned about the effect and the impact of this for everybody on planet earth. That is why the Chinese icebreaker was in Iceland, because of how afraid they are that the melting of the ice in the Arctic will prevent economic and social development and progress for the people of China in the coming decades. And if the Chinese are now scared and afraid, we who live in Arctic, and America's an arctic state through Alaska, should be as concerned.

CURWOOD: Olafur Grimsson is President of Iceland, thank you so much, sir.