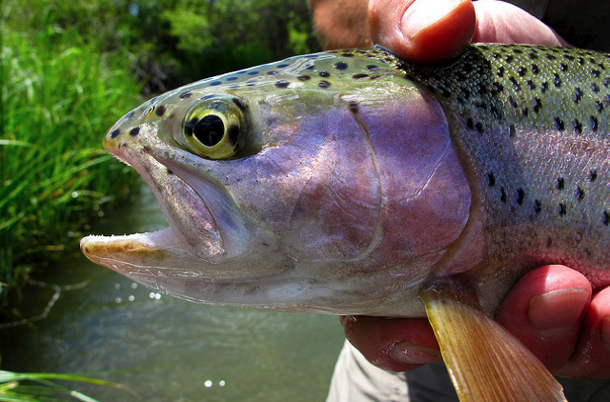 Scientists have located a magnetic cell in rainbow trout that is believed to guide fish and other species during migration. Annabelle Ford reports.

CURWOOD: It’s Living on Earth, I'm Steve Curwood. Coming up—a new book that tries to explain the weirdness of the global climate, but first this Note on Emerging Science from Annabelle Ford.

FORD: In the movie Finding Nemo, a clown fish ‘just keeps swimming’ for hundreds of miles in search of his lost son. In the real world, many migratory fish and birds travel similar distances to return to their birthplace. And while they don’t have a little blue fish called Dory to encourage them, they do have a tiny helper that enables them to navigate their way home.

FORD: The migratory species’ helper is a cell that contains magnetite, the most magnetic mineral on Earth. Scientists have long accepted that migratory species are sensitive to the Earth’s magnetic poles, but this is the first time that the precise cell with this magneto-sensitivity has been located.

A research team at Munich’s Ludwig Maximilians University studied rainbow trout and placed cells from their olfactory tissue under a microscope. A magnet under the microscope’s stage was rotated beneath the sample and the team was able to isolate several cells that moved with the magnet.

The cells that moved were then individually studied and found to contain magnetite, as expected. What makes this finding particularly interesting is the cells’ scarcity: only about one in 10,000 cells in the fish’s nasal tissue contains magnetite. And it turns out the scientists have not only located the cell, but they’ve also discovered its magnetic sensitivity is stronger than suspected.

The team estimates that the cell is up to 100 times more receptive to the pull of the magnetic poles than previously thought. They believe that rainbow trout may be able to perceive not just which way is North, but to sense their longitude and latitude as well.

The next step is to figure out if these few cells located in the fish’s nose are actually sensory cells that link to the brain. Scientists will have to ‘just keep researching’ before they know for sure. That’s this week’s note on emerging science, I’m Annabelle Ford.


An article on the discovery

The report published by the research team