Cracking the Code for Monsoons 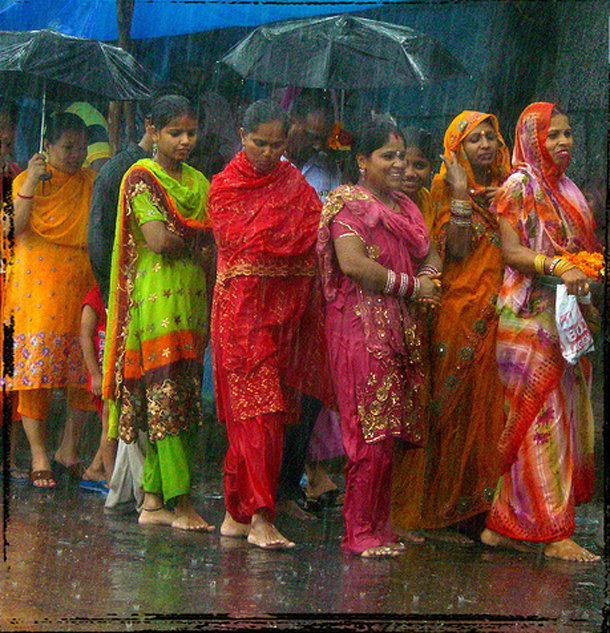 Indian Scientists are collaborating with collegues in the US and UK to develop new computer models to predict the movements of monsoons. Radio Deutsche Welle's Murali Krishnan reports that such information that will be critical for the millions of Indians who depend on farming for their livelihoods.

CURWOOD: Over half of people in India depend for their livelihood on farming, a job that's both tough and economically insecure. Less than half of Indian farmland is irrigated, so the annual monsoon is crucial. And this year, the monsoon came late, and has been sparse in much of the northern agricultural belt, leaving cracked fields and stunted crops.

But Indian scientists have teamed up with colleagues from the US and the UK to build new computer models to help predict the movements of erratic monsoons in advance. Super-computers, they say, will allow them to crack the monsoon source code. From New Delhi, Radio Deutsche Welle's Murali Krishnan has our story.

KRISHNAN: Debashish Sarkar, a small-time farmer, looks forlorn as he surveys his three acres of mustard and rice fields. Every now and then he looks up to the skies, hoping they will open up, as without the much-needed rains, he knows his crop will almost certainly fail. Small landowners like Sarkar are totally dependent on the monsoons to sow their fields. Erratic monsoons can put their lives in jeopardy.

SAKAR (THROUGH TRANSLATOR): Even this year, it looks as if there are going to be no rains. Until July, the rains have been scarce. This time too, the villagers are bound to suffer. All my fields are going to be destroyed… it's a major loss.

KRISHNAN: To address the problem, India's Institute of Tropical Meteorology, based in the western city of Pune, is working on a multi-million dollar National Monsoon Mission. The project aims to forecast extreme climate events, such as drought and floods, active and dry spells of monsoon, and more importantly, collect data on how rain will fall across the country.

If successful, it could drastically improve the economic prospects of about 600 million people in India, whose lives depend directly on the agricultural sector. Dr. M Rajeevan, an advisor to the Ministry of Earth Sciences is overseeing the project.

RAJEEVAN: The farming community needs longer forecasts than the medium range. That means forecasts from seven days to a range of one month. These forecasts aren’t being generated at the moment, but we expect that with this monsoon mission, we will do a better job.

KRISHNAN: The national Monsoon Mission has started using a dynamic model of prediction, which was developed by the US-based National Centers for Environmental Prediction. The dynamic model involves using super-computers to compare land and sea surface temperature data, wind speeds, and air pressure from the past 50 years to predict the monsoons.

BHAN: The focus beyond medium time-scales will be better, and the farmers will be able to make use of this information in terms of planning the seasonal aspects of their different crops: what to sow, when to sow, how much proportion and percentage of different crops. And also in the medium time scales, for making tactical decisions about when to irrigate, how much to irrigate and whether some pesticides and fertilizers are to be applied or not. That will help them bring down the cost of cultivation to a greater extent.

KRISHNAN: But the new model will benefit the country’s agricultural class in the short-to-medium term. The move is being closely watched by the agricultural sector; after all, it employs half of the country’s workforce. P.K. Basu, India’s former Agriculture Secretary, who retired a few months ago, says it’s critical. 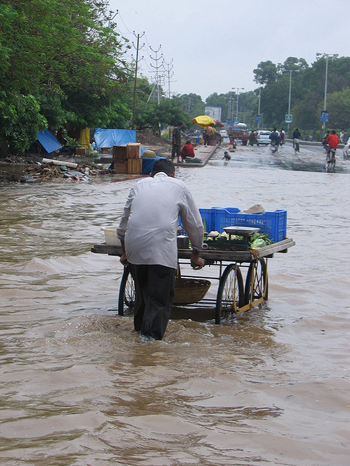 Commerce carries on during the monsoons. (Photo: fbloeink)

BASU: I think it is very critical; extremely critical for two or three reasons. One is, that India feeds 17 percent of the world’s population with its 1.2 billion population, with just 4.3 [percent] of the water that the world gets. So, we have a huge task on our hands, and any mistake that we make on the monsoons is extremely costly – as we have seen in the past in 2002, and 2009. And any improvement in the forecasting and prediction would be a great help in stabilizing food production in the country.

KRISHNAN: But these are early days. A lot will depend on how the government utilizes the new data. While it will be an advantage to know when the rains will fall, the government will also have to ensure that farmers get the right crop varieties, and that, on time. P.K. Basu again.

BASU: Where we are still deficient is the time period of about, say, 10-15 days. If somehow this mission can give us that kind of information 15 days ahead, it will help the farmers plan sowing…plan other agricultural activities very well. And I believe it is going on track, and I was assured by the IMD, that, and the Earth Science Ministry, that they are working on this problem very seriously.

It’s worst prediction was in 2002, when it forecast 101 percent rainfall, and the country only received 79.4 percent. So do farmers like Sakar have faith in this new national monsoon mission?

SAKAR (THROUGH A TRANSLATOR): Who knows what next year brings? Let's at least hope we have good rains.

KRISNAN: This year, the government has banked on a normal monsoon to boost weak economic growth. But so far, the reality has once again fallen short of everyone’s expectations. This is Murali Krishnan, in New Delhi.

CURWOOD: Our story on tracking the monsoon in India comes to us by way of the Radio Deutsche Welle science show: Spectrum. Now this year's sparse and spotty monsoon in India is not the only example of weather behaving unpredictably.