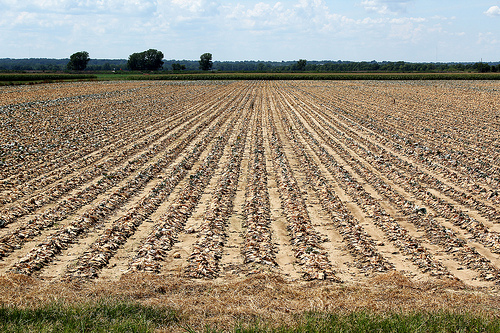 Fields for annual row crops such as lettuce and corn may lay fallow in California this year if the drought persists. (USDA)

Agriculture in California is a $45 billion a year industry that specializes in crops like almonds, grapes, milk, and tomatoes. USDA meteorologist Brad Rippey tells host Steve Curwood that the state's third consecutive year of drought means farmers will have to make tough choices about what crops to grow and it may cost us at the supermarket.

CURWOOD: It's Living on Earth, I'm Steve Curwood. The deep drought in California is likely to cut agricultural output this year, and Americans may soon notice, especially in the produce aisle.
Ag is a 45 billion dollars a year industry in California, and Brad Rippey, an agricultural meteorologist at USDA, says California grows a lot more than you might think.

RIPPEY: It's a really interesting list. If you look at the top 10, milk is on top, perhaps surprisingly, if you think about all the other crops. But number two is grapes, we have almonds, nursery plants, cattle and calves, and then the second half of the top ten: strawberries, lettuce, walnuts, hay and tomatoes. And because we have very little snow in the mountains, this is a third year of drought, there are expectations of significant cutbacks in water allocations and supplies for the summer of 2014.

The first to fall will be field crops because that’s an annual crop, you can obviously withhold the water in the field and it would just lie fallow. For some of the more perennial-type crops, fruits and nuts, vines and so forth, you have to water those in the summer to keep them alive so they would receive water but some of the field crops, those fields are going to lie fallow in the summer coming up.

CURWOOD: Now what’s the split of water between people use and agricultural in California? 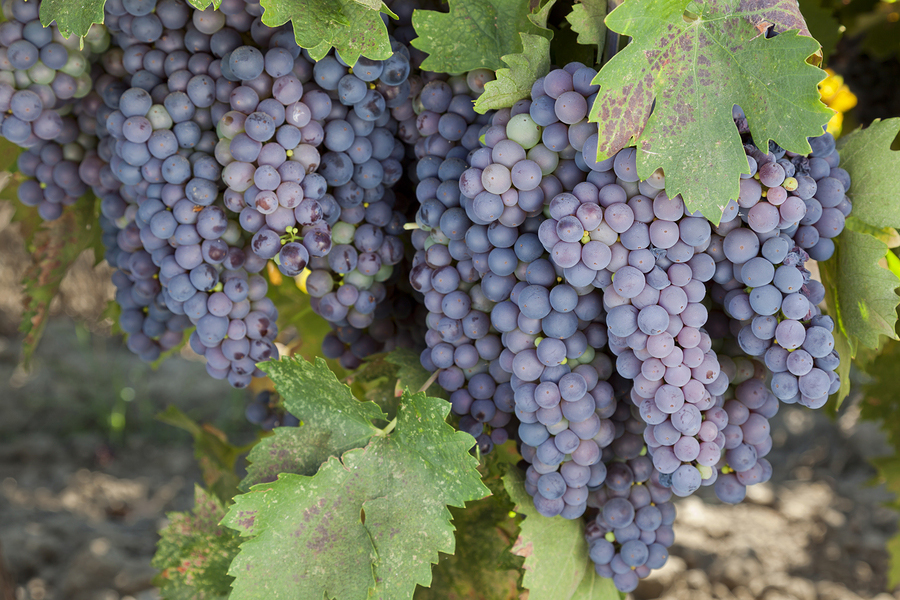 If water supplies are tight farmers will likely choose to water perennial crops such as grape vines and almond trees over annuals such as tomatoes or lettuce. (bigstockphoto.com)

RIPPEY: As much of 80 percent of California’s water usage is agricultural, and that leaves the other slice of that for a lot of competing interests, including, of course, municipal water, as well as hydro-electric generation, environmental concerns, and then recreational use as well as lake and river levels that need to be maintained for tourism.

RIPPEY: At this point, some of the more water intensive crops, such as rice, are the obvious ones to be cut back and to move to more either drought-tolerant or lower water use crops.

CURWOOD: California has a well developed system of reservoirs for storing water in times of drought like this. Can you describe that for me a bit?

RIPPEY: Sure, water management has certainly improved in California, but looking at the 154 intrastate reservoirs in California, it’s a tremendous amount of water. A lot of that comes from the Sierra Nevada. Those reservoirs, back during the drought of the 1970s, dipped to less than 50 percent of the average storage. Now, at the end of 2013, California’s sitting in a little bit better position - 70 percent of average storage. However, it’s worth noting that at the beginning of this drought, reservoirs were literally brimming over with about 130 percent of average storage. So in just over two short years we’ve seen that storage drop significantly on the order of 25, 30 percent storage per year. And we could easily see reservoir levels dipping to levels that had not been seen since the 1970s.

CURWOOD: So, Brad, if this drought persists, and farmers in California are forced to grow less, what does that mean for the rest of us who, well, you know, like to eat every day?

RIPPEY: Honestly, for some of these crops California is the primary source. In some cases, like citrus, we can go to Florida, to a lesser degree, Arizona or Texas, but fortunately because the overall US economic engine is pretty well buffered against crises such as drought, the Chief Economist of USDA is indicating that the western drought could have some impact on food prices, particularly fruits and vegetables. But the impact is, at least for 2014, expected to be relatively small. Just to put it in a little bit of perspective, food inflation for 2013 in the US, for all food, was only 1.4 percent. Now looking ahead to 2014, early expectations show food inflation expected to be 2.5 to 3.5 percent, which is pretty much in the range of historical values since the early 1990s.

CURWOOD: Brad Rippey is an Agricultural Meteorologist at US Department of Agriculture. Brad, thank you so much for taking the time with us.

RIPPEY: Thanks for inviting me to join you.