Peter Dykstra estimates that the new Congress is the most anti-science crowd on Capitol Hill since the Scopes Monkey Trial ninety years ago, a major event in the debate over whether evolution could be taught in schools. (Photo: Юкатан; Wikimedia Commons)

In this week’s trip beyond the headlines, Peter Dykstra gives host Steve Curwood a rundown on the newly-ascendent anti-science members of Congress, and looks back at the Montreal Protocol, a globally successful agreement that helped save the ozone.

CURWOOD: It’s Living on Earth. I’m Steve Curwood. It wouldn’t be the New Year, without a seasonal look beyond the headlines with Peter Dykstra. He’s with Environmental Health News, that’s EHN.org and the DailyClimate dot org, and he’s on the line now from Conyers, Georgia. Hi, Peter. A new year, and a change of control in Congress, what do you see there?

DYKSTRA: Well, Steve, the new Congress has hit town, and I wrote a piece to welcome them in. There are a lot of folks in Congress, veterans and newcomers, who have taken a firm stand against many forms of cutting-edge science. The last time the anti-science caucus was this strong may have been during the Scopes Monkey Trials ninety years ago. But that’s not the worst part of it: The folks who want to gut government research and deny climate change mostly won their elections by huge margins, suggesting that they’re virtually guaranteed perpetual reelection and jobs for life.

CURWOOD: Wow, the most anti-science crowd on Capitol Hill since the Monkey trials, which pitted creationism against scientific evolution? How did we get to this point? 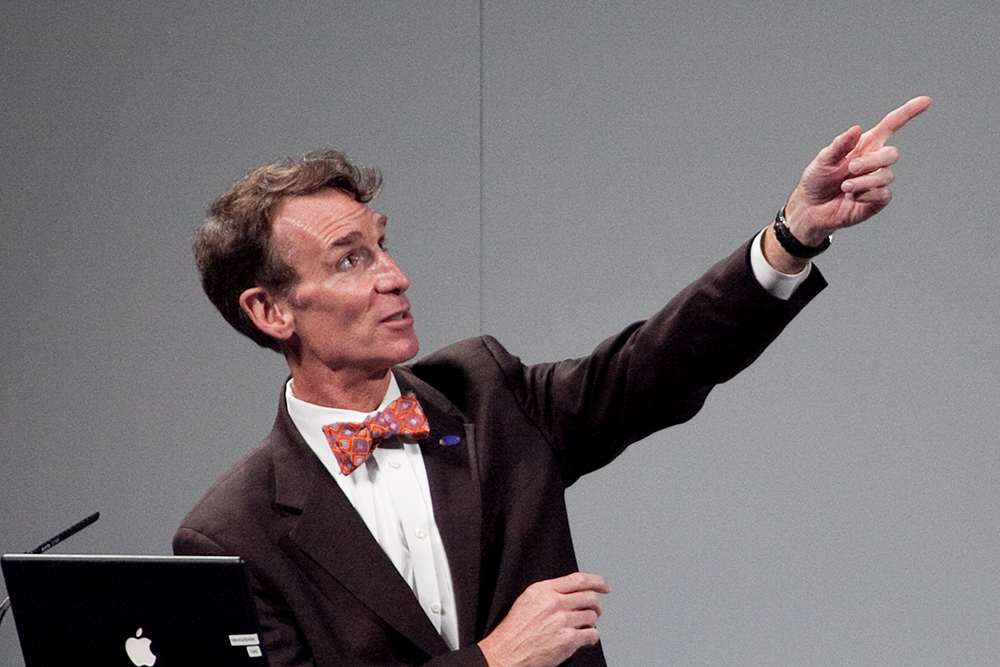 In 2014, Bill Nye ‘the Science Guy’ debated Representative Marsha Blackburn on whether or not climate change exists. Blackburn rejoins the U.S. House of Representatives this January, following a landslide victory over her opponents. (Photo: Ed Schipul; Flickr CC BY-SA 2.0)

DYKSTRA: Well, let me count the ways, and after that I’ll count how many members of Congress have, um, evolved. Redistricting, not to mention gobs of campaign cash, have had a particularly strong impact on the way Congress deals with science, environment and energy issues. And those easy election victories leave a strong suggestion that the Congressional anti-science streak isn’t going away any time soon, and maybe not in our lifetimes.

CURWOOD: So who are we talking about here? Give us a few examples.

DYKSTRA: Martha Blackburn of Tennessee went on Meet The Press to debate Bill Nye the Science Guy on whether or not climate change exists. She’s also famous for leading a counterattack on energy-efficient light bulbs, and in November she got re-elected over token opposition by 44 points. She’s one of many who have no political reason to take climate science issues seriously. And then there’s Lamar Smith, Chair of the House Science Committee, he ran a series of hearings that attempted to grill climate scientists and horn into Federal science funding decisions.

CURWOOD: And so how did his Democratic opponent fare at the ballot box?

DYKSTRA: What Democratic opponent? The Dems didn’t run anyone in Smith’s San Antonio district, and he beat two third-party candidates with over 70 percent of the vote. His Science Committee Vice Chairman is Dana Rohrabacher of California, a staunch climate denier who reveled in raking the White House Science Advisor in hearings last year. Rohrabacher won by a comparatively meager 29 points.

CURWOOD: So the theme here, Peter, is that environmental science isn’t on the radar screen as a vote-getter for folks controlling discussions in Congress, huh?

DYKSTRA: Apparently not as an election issue. But wait, there’s more. Next is Joe Barton, famous for apologizing to the CEO of BP after its big oil spill in the Gulf of Mexico in 2010. He said the government was trying to shake the oil company down. Barton is also from Texas and he won reelection to his sixteenth House term by a handy 25 points. And let’s look at a newcomer who ousted a powerful anti-science voice in the primary, but is poised to outdo him. 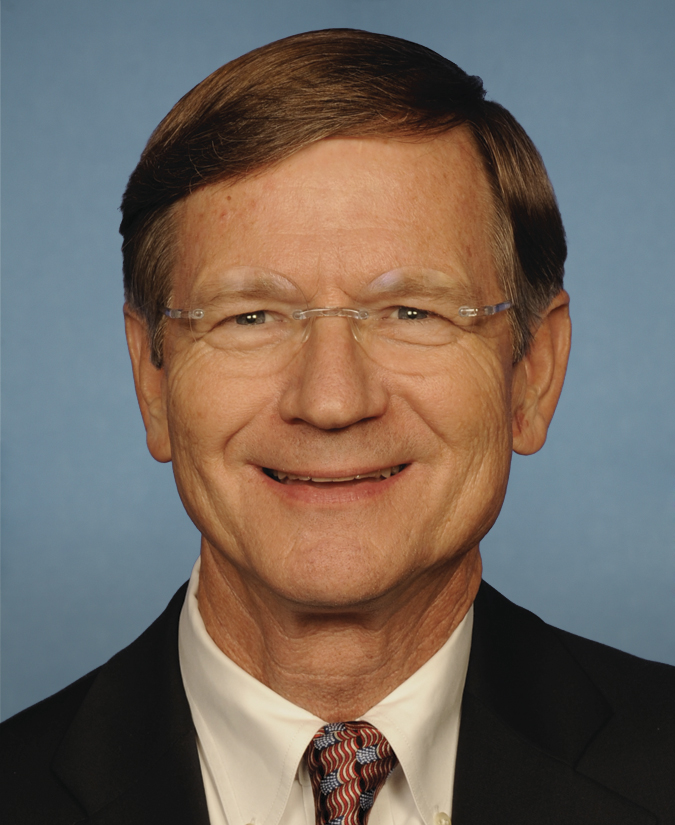 Lamar Smith returns to Capitol Hill as Chair of the House Science Committee, a position he’s used in the past to discredit climate science. (Photo: Connormah; Wikimedia Commons)

CURWOOD: Except that climate change is expected to hit the poor countries hardest, right?

DYKSTRA: Yeah, go figure. Now here’s your grand finale: Senator James Inhofe, the grandpappy of climate denial, won reelection by nearly forty points. He next runs, if he wants, in 2020, just before his 86th birthday.

CURWOOD: Well, you make it sound so bleak for science, but I suppose if you’re in the news business, at least bleak can be interesting. Let’s go on the environmental history tour for the week.

DYKSTRA: Steve, New Year’s Day marked the 25th anniversary of the Montreal Protocol. Negotiated in 1987 and taking effect on January 1st, 1989, the Montreal Protocol is an environmental treaty that works, that for the most part isn’t violated, and that after a quarter-century, is showing great results.

CURWOOD: Yeah, and the Montreal Protocol was the global effort to deal with the suddenly alarming news we all learned in the ‘80s that there were holes in the ozone layer. 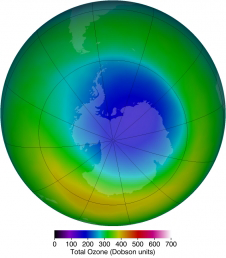 New Year’s Day marked the twenty-fifth anniversary of the Montreal Protocol, which restricts the use of chlorofluorocarbons, chemicals that damage the Earth’s protective ozone layer. The European Union and 196 nations signed the Protocol and since then, the ozone layer has been in recovery. (Photo: NASA/Ozone Hole Watch)

DYKSTRA: Correct. We learned that chlorofluorocarbons – CFCs – and other chemicals were having a brutal effect on the ozone layer that protects us from ultraviolet radiation and skin cancer. CFCs were used as refrigerants and in aerosol sprays, and they were just about everywhere. But 196 nations and the European Union struck an agreement, largely effective to this day, to restrict and outlaw CFCs and other ozone depleting chemicals. Scientists say the ozone holes are well on their way to repairing themselves. But one of the most remarkable parts of this story about politicians paying attention to science is that two of the world leaders who pushed to make the treaty happen were conservative icons Ronald Reagan and Margaret Thatcher.

CURWOOD: Hmm. Do the anti-science folks in today’s Congress know that?

DYKSTRA: If they do, Steve, it wouldn’t be a good fit in the political narrative on Capitol Hill these days.

CURWOOD: Peter Dykstra is publisher of Environmental Health News, that’s EHN.org, and The Daily Climate.org. Thanks, Peter, talk to you next time.

DYKSTRA: Okay Steve, thanks a lot, we’ll talk to you soon.

‘The Montreal Protocol, a Little Treaty That Could’