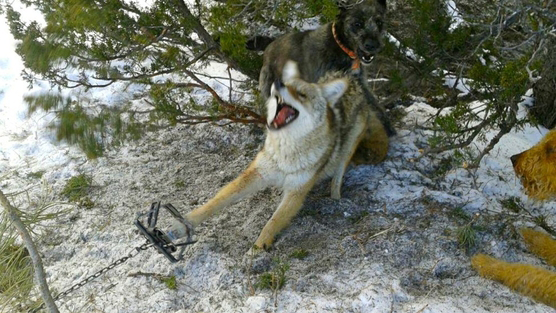 For more than a century, a US federal program called Wildlife Services has been operating in the shadows. It’s funded by private interests and taxpayer money, and now kills millions of animals — some inhumanely. As the Center for Biological Diversity’s Amy Atwood explains to host Steve Curwood, this slaughter is too often not in service of the animals or ecosystem, and has little regulation, transparency or accountability.

CURWOOD: Balancing native and non-native species’ involvement in ecosystems is an ever-evolving struggle. But unlike the Stewardship Saturdays in Boston Harbor National Park that operate out in the open, Wildlife Services is a little-known federal program that works in the shadows, culling millions of animals, allegedly with little oversight and regard for humane practices and updated science. Amy Atwood is the Endangered Species Legal Director for the Center for Biological Diversity, which has sued the Wildlife Services Program seeking more regulation, transparency and accountability. Welcome to Living on Earth, Amy.

CURWOOD: So, first, what is the Wildlife Services Agency?

CURWOOD: Now, what is the stated mission of the Wildlife Services agency? What services are they supposed to be providing?

ATWOOD: Wildlife Services conducts programs of research, technical assistance and applied management to resolve problems that occur when human activity and wildlife conflict with one another.

CURWOOD: What are the actual services that they are truly providing? 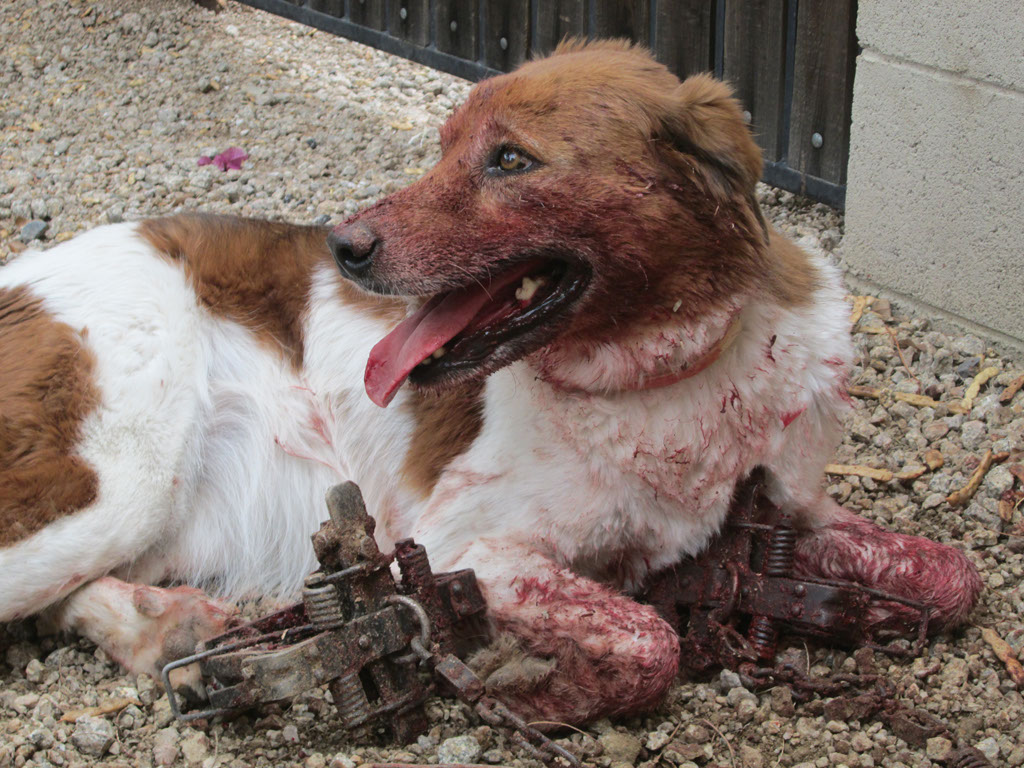 Many traps, poisons and other animal killing apparatuses are placed near and in neighborhoods without the knowledge of the community, thanks for the opacity of Wildlife Services’ codes of operation. (Photo: courtesy of Amy Atwood)

ATWOOD: Wildlife Services is working on behalf of private or specific interests usually from what are known as “cooperators” which can be other federal agencies, state agencies or private agribusinesses to eradicate animals that those industries considered to be pests, so from eradicating carnivore species in order to reduce the amount of predation on sheep or cattle to poisoning or trapping or shooting various species of birds because they consume grain or they damage crops, all the way through to aerial gunning of wolves in remote areas of Idaho.

CURWOOD: So how many animals has the Wildlife Services agency killed? And what kind?

ATWOOD: Wildlife Services reports that it kills millions of animals in the United States every year. In fiscal year 2013 the agency reported that it killed four million animals, two million of those are considered to be native wildlife and the rest are considered to be invasive or non-native. Just to give you a sense, it killed about 25,000 beavers, 300,000 red-winged blackbirds, a thousand bobcats, 20,000 double crested cormorants, 75,000 coyotes. Coyotes actually are the most frequently targeted animal of Wildlife Services with the program reporting that it kills an average of about 400 coyotes every week. Bald and Golden Eagles, black bears, 300 to 500, gray wolves and the list goes on and on from there.

ATWOOD: I did. Now, here we start to encounter the problem with relying on Wildlife Services’ data. The data that the program reports is not even a fraction of the total number of animals that are actually killed. We know that from prior agency employees. And so when we talk about these numbers we have to keep in mind that they are inherently unreliable. 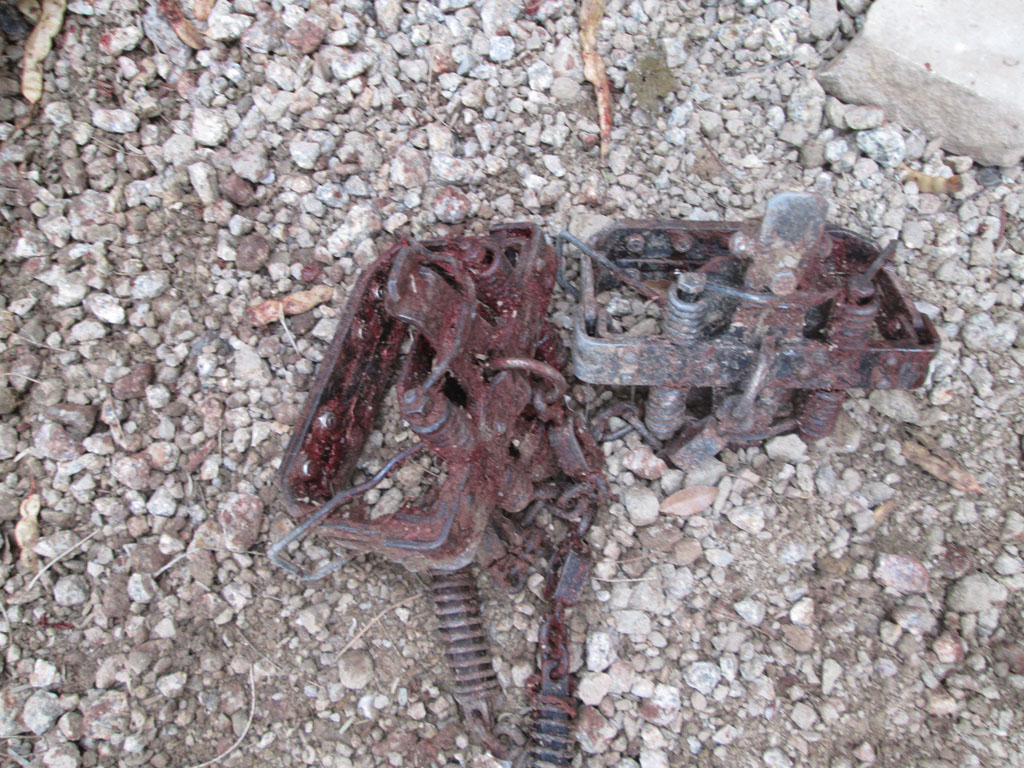 Those employed by Wildlife Services are supposed to check traps like this frequently, but it is known that some individuals will let several months pass before they are checked again, during which time, an animal, if caught, will likely suffer an inhumane death. (Photo: courtesy of Amy Atwood)

CURWOOD: Amy, talk to me about how this agency is funded and your concerns about the conflicts of interest here.

ATWOOD: The total budget for Wildlife Services totals about $115 million a year. About $59 million of that, or a little over half, comes from cooperative funding, and as a result of that there's an inherent incentive for Wildlife Services to be driven in its priorities by the directives of these cooperators. The activities that Wildlife Services carries out are not necessarily what's best for the American public at large or for ecosystems or biodiversity or wildlife in this country.

CURWOOD: You're an attorney with the Center of Biological Diversity. What are you seeking to do?

Many traps, poisons and other animal killing apparatuses are placed near and in neighborhoods without the knowledge of the community, thanks for the opacity of Wildlife Services’ codes of operation. (Photo: courtesy of Amy Atwood)

ATWOOD: Our mission is to protect biodiversity, so in the case of Wildlife Services, we've recognized that although this agency has been around for roughly a century, it has no binding regulatory framework, and so we see a very sort of old outdated way of looking at the role of these animals on the landscape, not to mention entire other federal programs in which the American people are investing millions of more dollars in order to try to protect and recover these animals to their native range on the landscape. And we are demanding that the USDA conduct what's called a federal rule-making to develop a regulatory framework that would bind this program's activities, and we would like to see a fundamental shift in the mindset and the culture of the agency in many areas whether it's from refocusing its efforts away from eradicating incredibly important species from the landscape to eradicating incredibly detrimental species from the landscape. Bullfrogs in the American Southwest are a tremendous threat to the survival of many endangered reptiles and amphibians and they're an invasive species, and while their services is not prioritizing eradication of bullfrogs from the American Southwest, and so where better to redirect the activities of the program like this then toward dealing with problems like that that really threatened to jeopardize and undermine the very fabric of some of the most iconic places in this country?

CURWOOD: How is the US Department of Agriculture senior management responding to your concerns and your call for new rules of procedures to be adopted?

ATWOOD: Well, we have received an official denial from the administrator of APHIS and we are evaluating our options at this point including litigation.

CURWOOD: Amy Atwood is the Endangered Species Legal Director for the Center for Biological Diversity. Thanks so much for taking the time with us today.

ATWOOD: Thank you for having me.


Petition to the USDA’s APHIS for Wildlife Services Rulemaking

An abridged history of the Wildlife Service