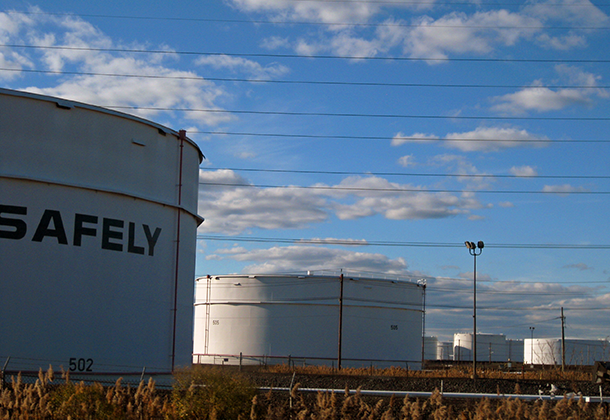 The State of New Jersey has agreed to settle an $8.9 billion environmental damage claim against ExxonMobil for $225 million. It’s the largest settlement in the State’s history, but former New Jersey Environmental Protection Commissioner Bradley Campbell tells host Steve Curwood it’s just pennies on the dollar and nowhere near enough to compensate state residents for loss of natural resources including wetland services.

CURWOOD: From the Jennifer and Ted Stanley Studios in Boston and PRI, this is Living on Earth. I’m Steve Curwood. Three cents on the dollar. That’s what the State of New Jersey has agreed to accept from the ExxonMobil Corporation as compensation for the loss or degradation of various natural resources, including some wetlands that could have reduced the storm surge of Superstorm Sandy. The settlement is still provisional and subject to public comment, and some of the criticism has been scathing, saying that a $225 million settlement of the state’s original $8.9 billion damage claim is both paltry and scandalous. Critics include environmental attorney Bradley Campbell. Mr. Campbell is a former EPA regional administrator and was the New Jersey Environmental Protection Commissioner who filed the original case against ExxonMobil back in 2004. Welcome to the program.

CURWOOD: So I gather that when you took over as the New Jersey Environmental Protection Commissioner you looked into the situation and you decided to file a case. Why did you file this case?

CAMPBELL: Well, we filed not just this case, but many cases to address the fact that in many sites across the state, companies were doing their cleanups but they were not addressing the injuries or damage or destruction to natural resources that accompanied the release of hazardous substances. We began a program really to get companies to step up their responsibilities, and many did, often developing innovative restoration projects to compensate the public for the damage of natural resources they had caused. Exxon, by contrast, refused to settle and that forced us to bring the claims to court.

CURWOOD: Now, tell us a little bit about the history of the land that's affected in this case and how it was used.

CAMPBELL: This is land in Bayonne and Bayway, the two sites operated by Exxon. It is an area that Exxon has used for decades, and over the course of those decades of operations they've released thousands of metric tons of tar into wetlands, into creeks, onto the land and destroyed much of the ecological function that existed in that area, and this lawsuit was really intended to force Exxon to compensate the public for the cost of restoring the resources and the ecosystem services that were lost as a result of the pollution.

CURWOOD: To be clear there's a difference between a remediation and restoration.

CAMPBELL: There is very much so. Remediation, or the part of the liability that Exxon has been committed to for many years, is actually either removing or containing the hazardous substances that have been released, and in the case of some releases of hazardous substances or oil, the remediation is sufficient, but in this case - as in many other cases - the release of hazardous substances also destroyed significant natural resources, wetlands, creeks, and land areas that are at the heart of the New York Harbor estuary.

CURWOOD: Now, some would say that the area that is contaminated where the ecosystem services have been lost has been badly damaged ecologically for more than a century. Why was Exxon in particular on the hook for this? 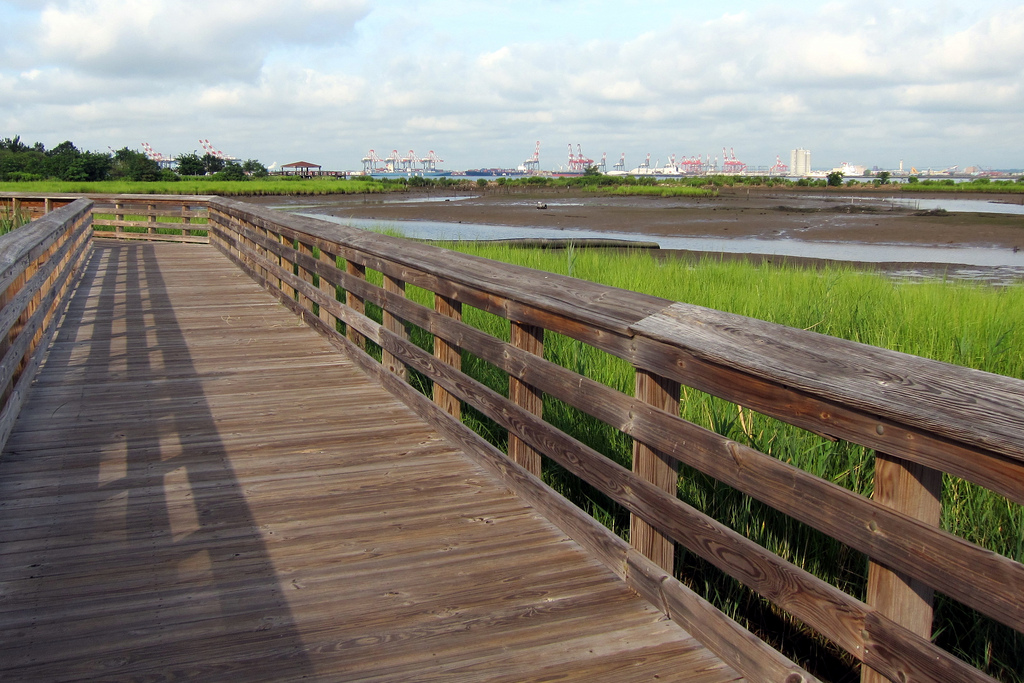 The wetlands of Bayonne, New Jersey. ExxonMobil’s nearby refinery did damage to wetlands like this which provide protection from storm surge. (Photo: Wally Gobetz; Flickr CC 2.0)

CAMPBELL: Well, Exxon-Mobil destroyed natural resources that could be providing services to the public. We are in an industrial area, but those are precisely the areas where communities don't have any access to the water and where injuries to natural resources have the most devastating effect, and I'm speaking both of ecological effect and economic effect. For example, New Jersey depends vitally on our tourism and our recreational fishing industries, and we all recognize that estuaries, including this heavily industrialized estuary, are the nurseries to the ocean, and so the replacement of those areas that provide fish habitat; in the case of wetlands that provide protection from storm surge, in a state that's been ravaged by Sandy, losing wetlands that protect us from storm surge and provide flood storage, those are services those resources provide that Exxon has taken away from the public and that should be restored.

CURWOOD: How did you come up with a number of $8.9 billion in lost ecosystems and the value of nature for the people of New Jersey?

CAMPBELL: Well there's a well-developed scientific discipline of restoration science. In this case we retained one of the nation's leading experts, a fellow named Dr. Josh Lipton, and he did a comprehensive assessment and valuation to determine what it would cost to restore the natural resource and services that have been lost. And that restoration cost really consists of a couple of different components: the first is called primary restoration, which means what would it cost to simply re-create the resources that were destroyed. The second component is called compensatory restoration, that component answers the question what do we need to do in the way of creating natural resource services that compensates the public for all the time that wetland was out of service. So in the case of the report that Dr. Lipton presented to the court, roughly a quarter of the cost or in the neighborhood of $2 billion was attributable to primary restoration, and the balance of it was related to compensatory restoration. In other words, making up for the decades and decades that the public had been denied the services of the resources.

CURWOOD: Now, this proposed settlement $225 million or so in a claim of $8.9 billion is, well, you do the math, it comes down to what, three cents on the dollar. New Jersey Attorney General's office says is the biggest environmental damages awarded the state has ever seen, so what's wrong with it?

CAMPBELL: Well, what's wrong with it is that it is three cents on the dollar, and of course, it would be in any measure, it should be the biggest recovery because, in fact, it's the biggest case the state has ever brought. I think that the notion that this is an acceptable settlement defies logic, and I also think it's important we focused on the Bayonne and Bayway facilities that were the subject of the lawsuit, but it turns out in the settlement the state has given Exxon a walk away not just for those two sites, but from more than 16 other sites across the state, and we don't even know if those sites were even assessed for what the natural resource damages were. So this settlement is truly on its face a sweetheart deal.

CURWOOD: As I understand it, and as you wrote, the Attorney General's office, in fact, seemed to be proceeding as this case was winding up when the Governor's council, the governor's own lawyers stepped in to grab the case. What is your understanding as to where it appeared that this was about to settle before the Governor's office got involved? 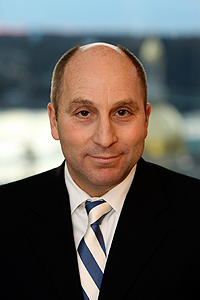 CAMPBELL: Well, I don't think settlement was in the offing other than through the intervention of the Governor's office. This was a case that was fully tried over a year and once it was fully tried and submitted to the court, the logical thing for any litigant to do would be to wait for the court's decision and see then whether some sort of compromise was appropriate.

CURWOOD: But isn’t it true that sometimes a case does go to the court or goes to the jury and that is a time in fact that parties decide well, "Hey, maybe we better settle. At least we can control the outcome here."

CAMPBELL: I understand if that happens and had the state settled for 50 cents on the dollar, 40 cents on the dollar, we would have a closer debate in terms of whether the settlement was reasonable on its terms. Certainly if the state had not added in numerous other sites, the value of which we don't know in terms of the releases provided by the settlement, we might have a closer case, but in the end I think most observers, and I think most of my colleagues in the environmental law community whether they represent corporations or whether they represent governments or whether they represent environmental groups, would've been very surprised by any judgment that came back with less than the amount it cost to actually restore the resource, which again the expert testimony put at about $2 billion. So to settle for three cents on the dollar in that context seems to me bizarre.

CURWOOD: Talk me through what happens next. How likely is this settlement to stick in your view?

CAMPBELL: Typically when two parties and especially when a government party and a private party agree to a settlement, judges are very reluctant to second-guess the decision of the parties. In this case I think there is the possibility, and I hope there is the probability that Judge Hogan will recognize that this was not the state’s resource to give away, that's according to this case needs to consider this a public trust, and that the government’s decision to settle on such a worrisome basis, it should be subject to close scrutiny and ultimately overturned.

CURWOOD: Bradley Campbell was the EPA Administrator for the mid-Atlantic states and former New Jersey Environmental Protection Commissioner. Thank you so much for giving us the time today.

CURWOOD: ExxonMobil had no comment about the proposed settlement agreement, but when asked about its remediation efforts at Bayway and Linden, ExxonMobil spokesman Alan Jeffers wrote in an email: "ExxonMobil has been conducting cleanup of both sites since 1991 under the supervision of the New Jersey Department of Environmental Protection and has spent about $260 million to date. We’ll continue with the cleanup until the state is satisfied."
There’s more information at our website, LOE.org.


Download a report of the environmental damage, prepared by the Stratus Consulting Group