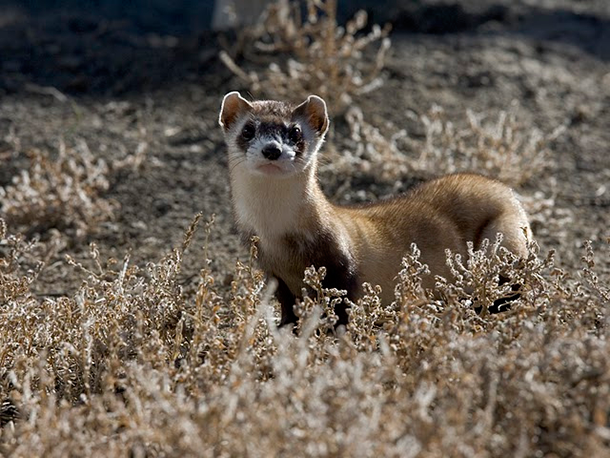 The black-footed ferret is a Red List success story. Habitat loss and extermination drove it to extinction in the wild by 1996. But the Wyoming Game & Fish Department led a successful breeding program with the few remaining black-footed ferrets that survived in captivity, and the species is now classified as ‘Endangered.’ (Photo: Ryan Hagerty/USFWS, Flickr CC BY 2.0)

The International Union for Conservation of Nature (IUCN) has recently updated its Red List of species at risk. Some creatures like the Chinese puffer fish are recently under threat, but populations of others such as the black-footed ferret in the west, are recovering strongly. The IUCN’s Red List Manager Craig Hilton-Taylor speaks with host Steve Curwood about new additions to the Red List and its role in global conservation efforts.

CURWOOD: Now rhinos, along with tigers, gorillas and panda bears are among the most high-profile endangered species, but they’re by no means the only ones. For 50 years, the International Union for Conservation of Nature, the IUCN, has curated its “Red List”, a catalog of species at risk of dying off entirely, and it’s just been revised. Craig Hilton-Taylor, who heads the IUCN's Red List Unit, says there’s always a need to reassess how threatened species are.

HILTON-TAYLOR: Currently we've assessed just over 76,000 species on the Red List. With each update, we don't look at every single species on the red list. That's impossible to do, so we processed 2,500 assessments of different species. Of those, just over 2,000 are brand-new entries to the Red List, the others were species that had been on the Red List before, and we looked at again and reassessed. So, an example of a reassessment was the Pacific Bluefin Tuna, and previously we had listed that species as being least concern – so it has the lowest risk going extinct in the near future. But based on the new data we gathered from the fisheries industry, we realize now that the Bluefin tuna has declined more than 30 percent of the last 22 years, so as a result we're now listing it as vulnerable. And this is clearly because of the demand to meet the sushi and the sashimi markets in Asia. A new entry to the red list is the Chinese Pufferfish. It's highly desirable in Asian food markets. That species has undergone a 99 percent decline in the last 40 years, and so we now list it as critically endangered, because if we don't do something soon, that species will very soon be extinct.

CURWOOD: Now, as I understand it, the Red List does include species that have already gone extinct. Why do you do that, and which ones? 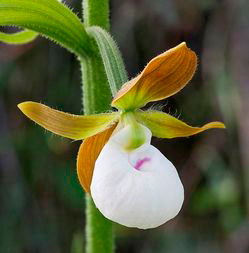 Species on the Red List include flora as well as fauna. The California lady’s slipper, a rare orchid found only in small subpopulations in California and Oregon, is currently listed as ‘Endangered’ due to habitat loss. (Photo: Bill Bouton, CC BY-SA 2.0)

HILTON-TAYLOR: We do include those so the Red List is not good at recording extinctions because of this lag time effect. We've only surveyed a very small portion of the world's biodiversity. There are many species out there which are probably going extinct and which we have no idea have disappeared. But we do try to keep track of the known extinctions that have taken place since the year 1500. So, for example, the St. Helena earwig, which is a very uncharismatic, if you like, strange creature that people will look at and think, "That's not a major loss to the world." It occurred on the island of St. Helena, which is a small oceanic island in the middle of the Atlantic Ocean. It's the place where Napoleon Bonaparte died eventually, and this species was last seen in 1967 and they haven't found it since then. The habitat where it used to occur has been heavily disturbed, it's also been the impact of invasive species: mice, rats and other creatures, and so we suspect the St. Helena earwig went extinct in the early 1970s, but it's taken us many years to gather enough negative evidence to say, "Yes, that species has finally gone extinct." It may not sound like very much. It's an earwig. But it was a very large earwig and it must have played quite a crucial role in the ecosystem on that island, and we don't really know what we've lost there. And yet, it’s a bit like the analogy with an airplane, you can pop the rivets of an airplane's wing and it will keep on flying until at some point the wings will fall off. And we don't know when that point will be with biodiversity on earth and so we have to try and stop as many of these species from going extinct as possible. 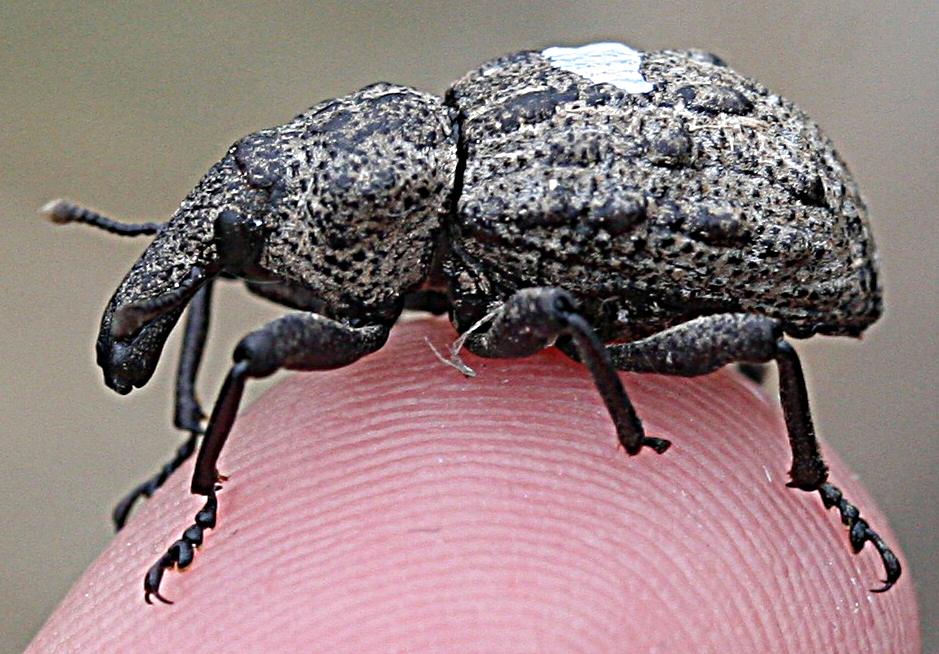 Ecologists believed the Canterbury knobbed weevil extinct for nearly a century, but in 2014 its status on the Red List was changed from ‘Extinct’ to ‘Critically Endangered’ following the discovery of a small population near Christchurch.
(Photo: Vikki Smith, Wikimedia Commons CC BY-SA 3.0)

CURWOOD: Craig, tell me, what is the Red List's roll as part of the broader strategy towards protecting biological diversity and ecosystem health?

HILTON-TAYLOR: So the main goal of the red list is to catalyze action for biodiversity conservation by providing information analysis on the global species and describes the threats to the different species, what the population sizes are, their trends, and what conservation actions are currently in place and what's needed. It's a bit like the Accident and Emergency ward of a hospital where a sick person or injured person will go to the department and the triage nurse will look at that person and say, "OK, you need to see a doctor immediately, or no you can maybe wait half an hour, two hours to be seen because you're less urgent." And that's really what the Red List is about, saying these species are at high risk of going extinct in the future unless we do something about it. And so we put that information out there, and then we rely on the world's governments, the other conservation organizations involved around the world to take that information and then put in place the appropriate actions. So, for example, the Convention on Migratory Species uses the Red List to advise on what species should be listed under that convention. The Convention on Biological Diversity has set up 20 targets that it's trying to achieve to reduce impacts on biodiversity, by the year 2020, and the Red List is used directly to measure progress in achieving those targets.

For some species, like the Saint Helena giant earwig, the Red List becomes a death certificate. The earwig, which was endemic to the island of Saint Helena, disappeared around 1970 as a result of habitat loss and predation by non-native species. It was listed as ‘Critically Endangered’ until 2014, at which point ecologists were able to determine that it had in fact gone extinct decades earlier. (Photo: Roger S. Key, Wikimedia Commons CC BY-SA 3.0)

CURWOOD: Craig, how do you actually compile this Red List? Who is involved?

HILTON-TAYLOR: We have a network of 8,000 experts, and they gather information as part of the work that they do, whoever they are working for. And as they gather the data, it gets fed through our database, and then they produce the assessments, looking at population trends and changes to the distribution range over time with the various threats to the species, and then we categorize them into these different categories of extinction risk.

CURWOOD: Now, which of the various species that are on the list have most caught your attention? 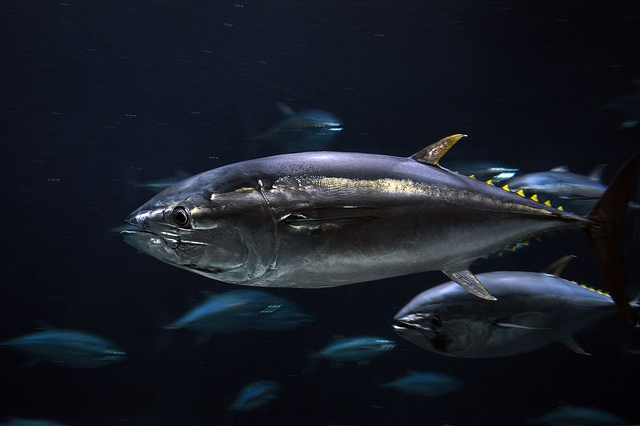 Noting a 30% decline in population in the past 22 years, the IUCN Red List Unit changed the status of the Pacific bluefin tuna from ‘Least Concern’ to ‘Vulnerable’ in the latest iteration of the Red List. (Photo: makitani, Flickr CC BY-NC-SA 2.0)

HILTON-TAYLOR: I like the good news stories, because that's always something you can really talk to people about and just show that you can make a difference. So one North American example is the Black-footed Ferret which back in 1996 we thought was extinct in the wild, and it was all because of habitat loss and people killing Black-footed Ferrets because they perceived them to be vermin. And also there was a decline in the gopher population which the Black-footed Ferrets, that's their prey item, and farmers in the Midwest do not like gophers. And then the Wyoming State Department of Conservation of Wildlife did a fantastic job with breeding of the species, because there were animals in captivity at the time, and since then they've been known to reintroduce animals back into the wild. And the population has grown, so they are no longer extinct in the wild. And that really is great news, to see that you can turn things around. 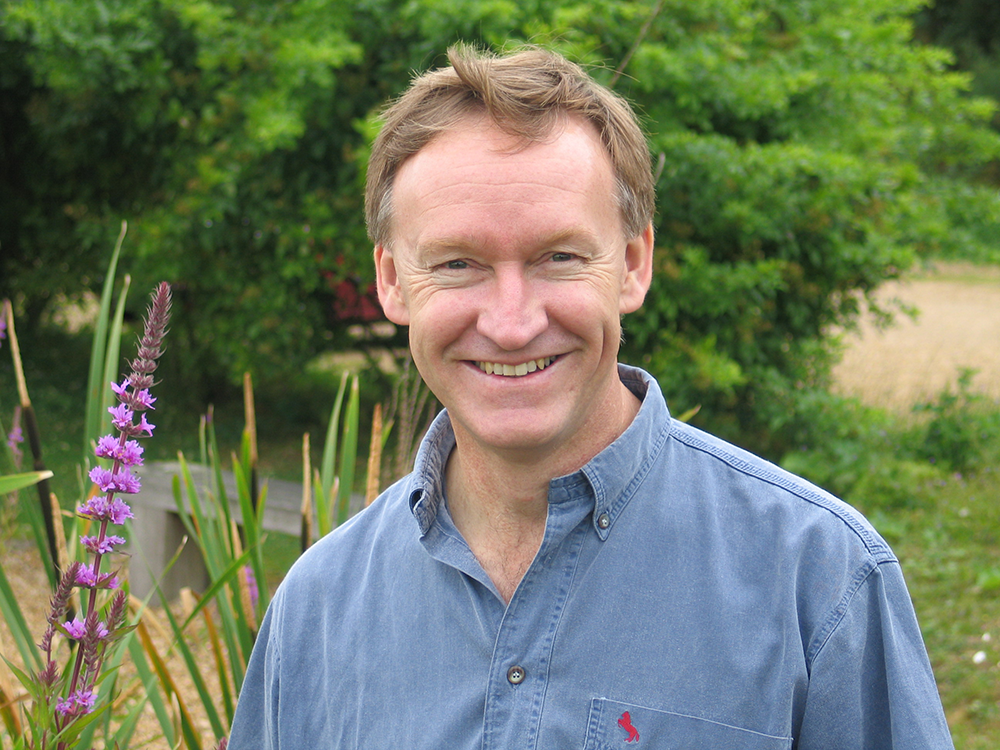 CURWOOD: Craig Hilton-Taylor is head of the Red List Unit at the IUCN, speaking us today from Cambridge in the UK. Craig, thanks for taking the time to speak with us today.

"Of bluefin and pufferfish: 310 species added to the IUCN Red List"