One Woman Fought Shell Oil To Save Her Town 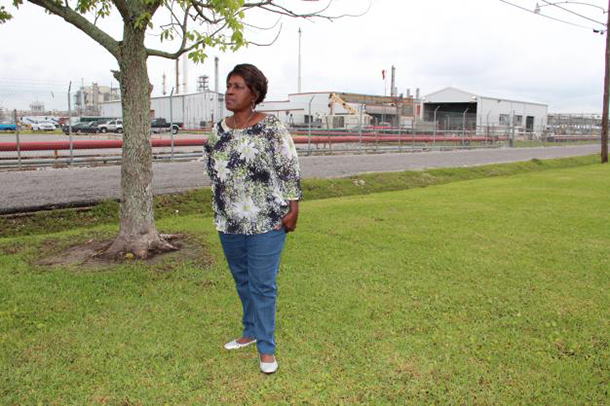 Margie Richard stands in what used to be her front yard, across the street from Shell's Norco, La. chemical plant. Richard pushed for the company to buy out the neighborhood and move residents. (Photo: Reid Frazier)

Norco, Louisiana is named after the New Orleans Refinery Company, which built a highly polluting refinery there in the early 20th century. The Allegheny Front’s Reid Frazier tells the story of Norco resident Margie Richard, who went all the way to the UN to protect her town’s public health.

CURWOOD: Well, one town on the frontlines of the oil workers strike was Norco, Louisiana - home to a refinery and a Shell chemical plant. Pollution and safety concerns are hardly breaking news in Norco. Forty years ago, residents were complaining about fumes from the plant, and health problems, and eventually many residents were relocated, largely thanks to the efforts of a retired schoolteacher. But such worries aren’t obsolete. Shell plans a new chemical plant in Beaver County, Pennsylvania, to make plastics using the copious local supply of Marcellus shale oil. And as Reid Frazier of the Pennsylvania public radio program the Allegheny Front reports, the determination of one woman in Norco years ago has lessons for residents of Beaver County today.

FRAZIER: Margie Richard is walking on a street with no houses anymore, just lawns.

RICHARD: That’s the backyard of my mom and dad’s house, which was right there, and my mobile home, which was over here. 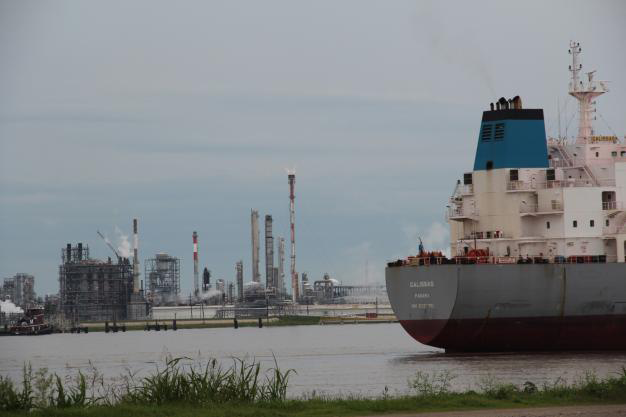 Looking out on the Mississippi River from Norco. Louisiana's Chemical Corridor, a 100-mile stretch of more than 100 chemical plants with about 27,000 jobs, provide about a quarter of the nation's petrochemicals. (Photo: Reid Frazier)

FRAZIER: This is Norco, Louisiana. We are about 300 yards from the Mississippi River, 20 miles or so upriver from New Orleans. Richard is a 71-year-old former schoolteacher. She points to a tree where her mom used to sit.

RICHARD: She liked to sit outside. But it got to the point she couldn’t sit outside because the fumes was always gas—she had to go inside.

FRAZIER: The fumes she’s talking about were coming from a petrochemical plant owned by Shell a few feet away.

Shell built a refinery here in 1916. The New Orleans Refining Company, or NORCO, ran the facility and eventually, the town adopted the name.

In the 1950s, Shell built a chemical plant nearby in an all-black part of Norco called Diamond. Richard grew up next to the plant. But years later, she would lead a fight to have the company relocate the neighborhood.

As a child, she grew up smelling foul odors from the plant that she likened to bleach. She remembers people in the town suffered health problems, which she blamed on those fumes.

RICHARD: Everybody within these two streets had breathing machines in their house.

FRAZIER: Then one day in 1973, a teenager named Leroy Jones started a lawnmower a few feet from a leaking pipeline, sparking an explosion. It killed an elderly woman who lived nearby. Her name was Helen Washington. Richard remembers the scene vividly.

RICHARD: There on the ground was Miss Helen who lived in the house, under a sheet. And you could smell her hair—it was just awful.

FRAZIER: This was a turning point both for the town and for Richard. She began taking stock of the health problems experienced by people in her neighborhood. Her sister contracted a rare inflammatory disease called sarcoidosis. But the symptoms were so common, her sister didn’t realize she had it until it was too late. 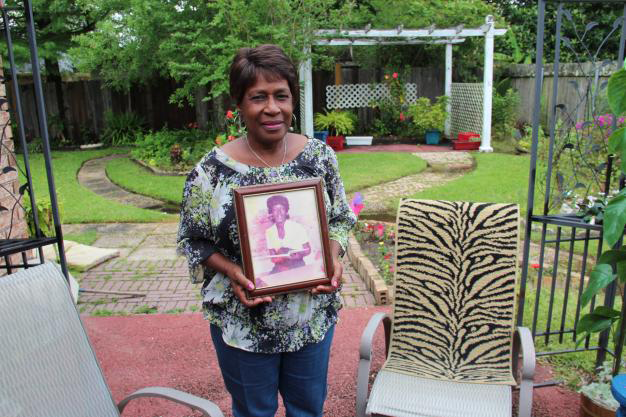 Margie Richard with a photo of her sister Naomi, who died at the age of 43 from a rare bacterial infection. Richard suspected emissions from Shell had something to do with making her sister sick. (Photo: Reid Frazier)

RICHARD: It’s like an allergy, you think you got sinus or whatever...certain times of the year – seasonal change.

FRAZIER: Though there’s disagreement over what causes the rare disease her sister had, some scientists think chemical exposures can trigger it. Richard suspects that was the case for her sister Naomi, who died at the age of 43.

In 1988, there was another explosion. This time it was at Shell’s oil refinery in Norco. The blast killed seven workers and damaged walls and buildings around the town. It was so strong it set off alarms in New Orleans, 25 miles away.

Richard decided to fight Shell, to get the company to relocate residents away from both plants. Richard helped bring in an environmental group that monitored air emissions with 5 gallon buckets.

RICHARD: We learned how to capture the air, how to have statistical reports.

FRAZIER: The group detected chemicals in the air that Shell had never reported to the state’s environmental agency. This caught the attention of the press, and regulators. Before long, Richard was being asked to share her findings. She spoke before the UN in the Netherlands, where she confronted a high-ranking Shell executive. She remembers the meeting, in which she brought a sample of air taken from Norco:

RICHARD: I stood before the United Nations, with my bag of polluted air

FRAZIER: And she asked the executive, would he like to breathe the air?

The gambit worked. A few weeks later, another executive from Shell knocked on the door of her trailer in Norco, wanting to talk. Soon, the company was offering to buy people’s houses near the chemical plant with a minimum offer of $80,000. More than 300 families took the buyout, including Richard’s.

Throughout the campaign Shell denied that its plant made people in Norco sick. And though it’s the subject of much debate, there’s no scientific proof that Louisiana's chemical industry has anything to do with the state’s high incidence of cancer - according to the CDC, Louisiana has the second highest cancer rate in the country. A Shell spokeswoman says the decision to buy out homes was in no way related to health concerns, but part of a longer-term effort to create a greenbelt around the chemical plant. 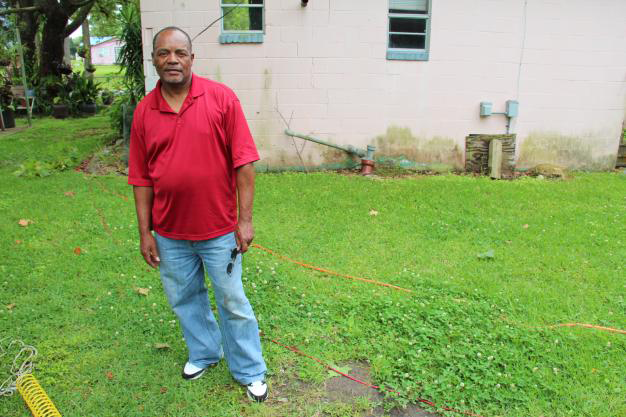 Lionel Brown chose to stay in Norco. He works at a Dow chemical plant and said emissions are lower than before. (Photo: Reid Frazier)

Still, even industry backers say big chemical plants in Louisiana are better neighbors these days than they were a generation ago, when Richard was fighting Shell.

JOHNSON: The industry recognized that it had to do a better job communicating with and listening to the citizens who lived in communities around them.

FRAZIER: Tim Johnson is a public affairs consultant to the petrochemical industry in Louisiana. He says experiences like Norco’s have been part of an evolution the industry has undergone in the past 25 years. Part of this had to do with companies simply wanting to do the right thing. But, he even admits, part of it was because they were forced to.

JOHNSON: You have to be honest to say …that a lot of the improvements they’ve made have been as a result of regulations.

FRAZIER: These improvements have cut toxic air releases in Louisiana by about half of what they were in the early 1990's.

The EPA now has a program to ensure black and other minority neighborhoods – like the Diamond section in Norco -- aren’t subjected to inordinate amounts of industrial pollution. 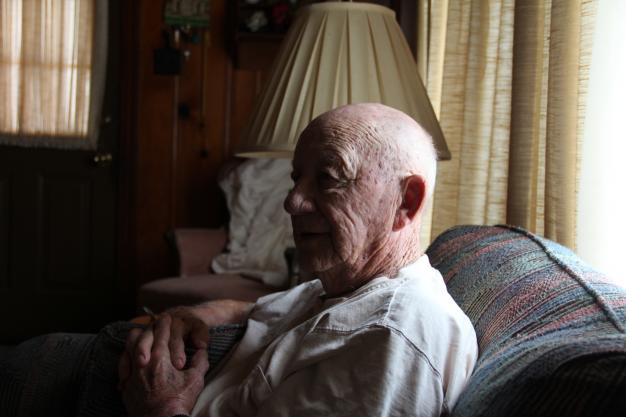 Ted Davis, a World War II vet and retired Shell Norco employee said the fumes and the smell of chemical production were part of the job. (Photo: Reid Frazier)

Today Diamond, the neighborhood where Margie Richard grew up, is quiet, except for the hum of Shell’s chemical plant. About 40 families stayed here. They received a home improvement grant from Shell. One who stayed behind is Lionel Brown. On a Saturday afternoon, Brown tinkers with his brother’s pickup truck in his driveway.

BROWN: I saw no reason to move—I didn’t want to sell—first of all they didn’t give enough money for what I had.

FRAZIER: What he had was a house and four adjacent lots. Now that air monitors have been installed in the neighborhood, he’s also not so worried about pollution.

Brown works at a nearby chemical plant for Dow. That makes him feel safer about living next to the Shell plant, even though he knows the chemicals made at his job are dangerous.

BROWN: They make stuff that’ll kill you. [LAUGHS] But everything is contained.

FRAZIER: Margie Richard now lives in 15 minutes away from Norco. She thinks community leaders in Pennsylvania need to pay attention to what the company is considering for Beaver County.

RICHARD: You should have input in what is going on.

FRAZIER: She says it took decades, but Richard thinks the town and the company finally learned this lesson.

CURWOOD: That’s Reid Frazier of the Allegheny Front. This story was supported by the Fund for Investigative Journalism.


Check out the original story on the Allegheny Front website