FBI Breaks Its Own Rules to Spy on Keystone Protestors 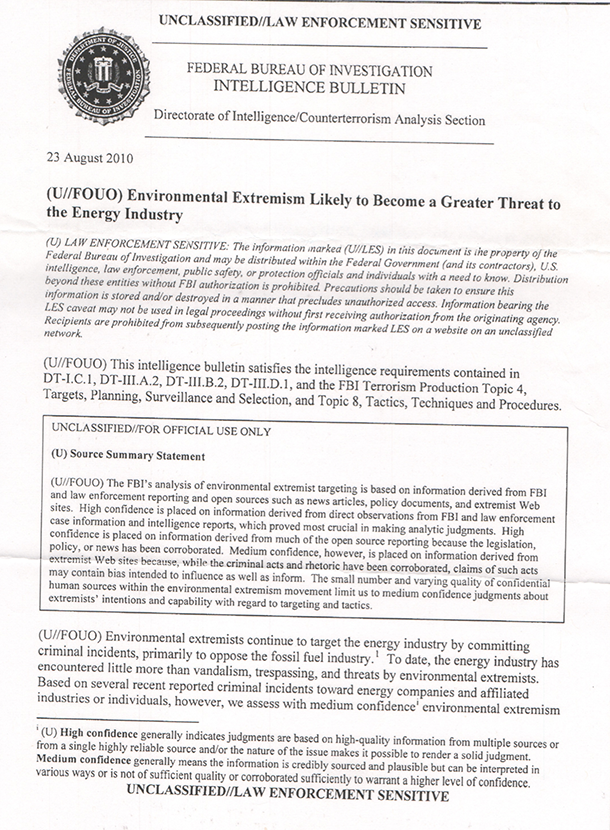 If you oppose more oil pipelines and expanded fossil fuel development, you might be on the FBI watch-list. Revelations from Texas show FBI investigators deemed environmental action as extremism.Environmental activists nationwide have protested the Keystone XL pipeline and the FBI has tried to question some of them. As Earth Island Journal reporter Adam Federman tells host Steve Curwood, the FBI’s Houston branch violated its own protocols, opening sensitive probes into Keystone protestors without proper authority.

CURWOOD: From the Jennifer and Ted Stanley Studios in Boston and PRI, this is Living on Earth. I’m Steve Curwood. The FBI is at it again. Three months ago, we reported that the Federal Bureau of Investigation had contacted and tried to question opponents of the Keystone XL pipeline in Idaho even though the protestors merely committed acts of civil disobedience. Well, now the Bureau has acknowledged that its Houston Field Office broke FBI rules as it investigated Keystone opponents in Texas as well. Internal FBI documents show that the probe of what it calls “environmental extremism” went ahead without proper authority. Adam Federman is a reporter with Earth Island Journal who wrote about the FBI’s actions in the Guardian, and he joins me now. Welcome to Living on Earth.

FEDERMAN: Thanks very much.

CURWOOD: Your recent article in the Guardian touches on how the FBI failed to follow its own rules as it engaged in surveillance of Keystone pipeline opponents. Tell us about that please.

FEDERMAN: Yeah, I think it's helpful, actually, to step back to kind OF fill in the backdrop of the story which involved an environmental organization called Tar Sands Blockade which had started to actively organize in Houston and other parts of Texas in late summer of 2012 where tar sands oil would eventually end up at refineries there. You had a lot of of interest in the Keystone pipeline, it had become a national issue, and it was right around this time that the FBI's Houston office started to gather intelligence on activists AND on Tar Sands Blockade. We know that the investigation was formally opened in January 2013, but the FBI had intelligence leading up to that and the revelation that the agency had violated its own internal rules and regulations surfaced in August of 2013. So, quite a ways into this investigation.

CURWOOD: What exactly did the FBI do in terms of not following its own rules?

CURWOOD: Adam, how did you discover that the FBI hadn't followed its own rules?

FEDERMAN: So in the Freedom of Information Act request that we filed, the documents that we obtained came to include the report of noncompliance which was drafted in August 2013, so it wasn't something that we learned of after the fact. It's part of the investigative file. 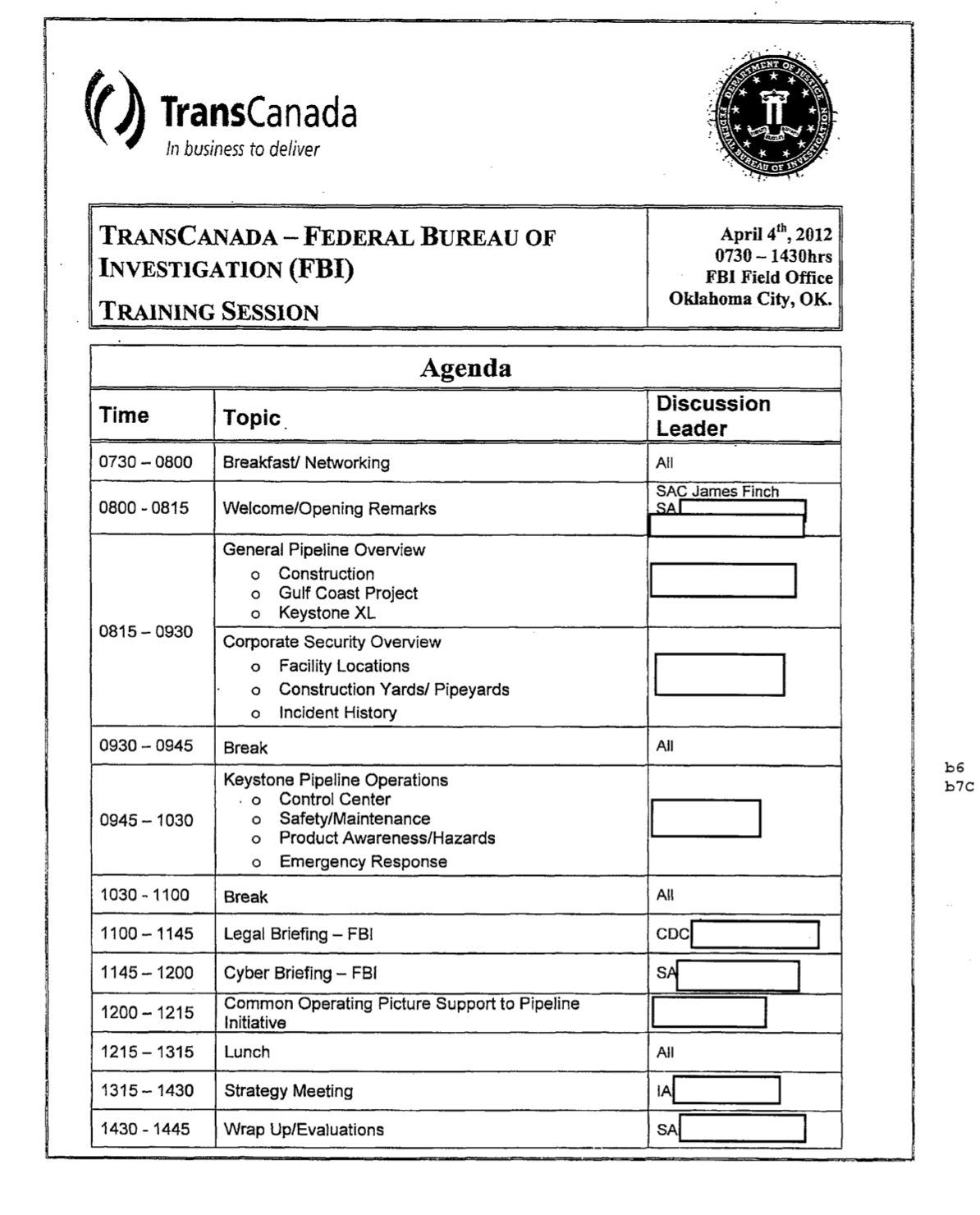 CURWOOD: To what extent did you get information as to how and why the FBI had decided to classify these protesters as extremists?

FEDERMAN: That's an excellent question and probably the hardest to answer because the documents are redacted, and the way that environmental extremism is defined in the documents we have is incredibly broad, which is both troubling and also makes you wonder what sort of intelligence the agency was using to base its investigation on. I mean, they say that environmental extremists believe that the debates over pollution and I'm quoting directly here, "protection of wildlife safety and property rights have been overshadowed by the promise of jobs and cheaper oil prices" which I think would characterize the way a lot of people feel especially in these places that are directly affected by oil and gas development.

CURWOOD: You say the FBI justified its investigation into these activists, these Keystone activists. What was the justification?

FEDERMAN: The justification that the FBI has given is that there were threats of violence to the Keystone pipeline project, however it's very vague. They haven't offered any esxplanation for that intelligence and in the files that we obtained there are comments throughout the documents about how they have no evidence of extremist activity, no intelligence that any of these activists are planning to commit violence. So it wasn't that hard for the FBI to really see that OK, this organization is made up of activists who feel strongly about this issue and they're willing to get arrested and commit these acts of civil obedience, but then to conflate that with environmental extremism I think is where we get into pretty murky water.

CURWOOD: How fair is it to say that the FBI might've been motivated by certain business interests here?

FEDERMAN: It's becoming abundantly clear that the energy industry, in particular, and law enforcement at every level routinely share information and the extent to which law enforcement, including the FBI, is being influenced or even taking some direction from private companies is a key question, and especially going forward given the mounting conflict between the environmental movement and the oil and gas industry. So in east Houston in fact where a lot of the organizing was taking place with Tar Sands Blockade, there's an interesting example of how this sort of plays out in real time. There's a major oil refinery there, the Valero refinery which would accept tar sands oil from Alberta and activists in that neighborhood have been campaigning for years around environmental issues and one of the things that they often do is they take photos of flaring at some of the refineries and industrial facilities along the port there, and these folks who I've spoken have been followed by corporate security, they been questioned, they been harassed by police, and one individual was actually contacted by an FBI agent. So it's become very easy for these companies to simply contact the FBI if they are confronted with activity that they simply don't approve of or don't like.

Adam Federman is a reporter with Earth Island Journal and recently published a piece on FBI surveillance of Keystone XL activists in Texas in The Guardian. (Photo: courtesy of Adam Federman)

CURWOOD: Adam, if the FBI's watching more and more activists, who is watching the FBI?

FEDERMAN: It's an excellent question, though I think what we can glean from these documents that we've obtained is that no one's really watching the FBI. They're out there opening investigations with very little evidence that criminal activity may be involved, in fact, we know that since 9/11 the category of investigation that was opened in this case is called an assessment and an assessment can be opened with no reasonable suspicion and gives the FBI incredible power to pry into the lives and activities of individuals and organizations.

CURWOOD: Adam Federman writes for Earth Island Journal. His recent article on the FBI surveillance of Keystone XL pipeline activists was published by The Guardian. Thanks so much, Adam, for taking the time.

FEDERMAN: Great to be with you. Thanks.

CURWOOD: We contacted the FBI repeatedly for comment, but they did not respond in time for our deadline. There are links to the FBI documents at our website LOE.org.

The FBI's response received after our deadline:

The oil and gas industry and energy sector is considered a part of the critical infrastructure of the United States, and, as such, entities within those sectors as they exist may be targeted for terrorism, espionage or other criminal activity. The documents recently released under FOIA are pertinent to an assessment related to the existing pipeline.

The administrative error was discovered by the FBI’s internal oversight mechanisms. While the FBI approval levels required by internal policy were not initially obtained, once discovered, corrective action was taken, non-compliance was remedied, and the oversight was properly reported though the FBI's internal oversight mechanism. At no time did the review find that the initial justification for the assessment was improper. In fact, once the administrative error was discovered, the Chief Division Counsel and Special Agent in Charge signed the non-compliance report, and the assessment was continued under full compliance of the Attorney General Guidelines."


Adam Federman’s article about the FBI in The Guardian

Houston Division of the FBI