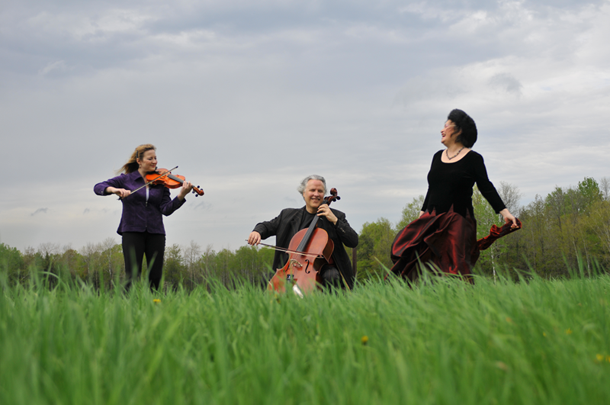 John Muir, one of the fathers of American conservation, helped establish many of the west’s national parks. Now an urban chamber music group called Chance is celebrating Muir’s history and conservation legacy with a narrative concert that incorporates vocals, strings, and readings from his works. Living on Earth’s Helen Palmer reports on “John Muir, University of the Wilderness”.

CURWOOD: It's Living on Earth, I'm Steve Curwood. Of all the figures that helped shape an early appreciation for the American landscape, John Muir is among the most iconic. Muir’s mission in life was the protection of wilderness, and the founder of the Sierra Club is credited with inspiring President Theodore Roosevelt during a camping trip in Yosemite to start the National Park System. Today, the landscape of the country shows Muir’s legacy — with the John Muir hiking trail, Muir Glacier, Mount Muir, Muir Woods. And the June 13th dedication of new lands at Muir Park, including the Muir homestead in Wisconsin, provides the quartet “Chance” the occasion to celebrate John Muir in music. Living on Earth’s Helen Palmer prepared this report.

MITCHELL: “My ancestors must have been born on the Scottish moors, for there is heather in me, and tincture of bog juices oozing through all my veins.” 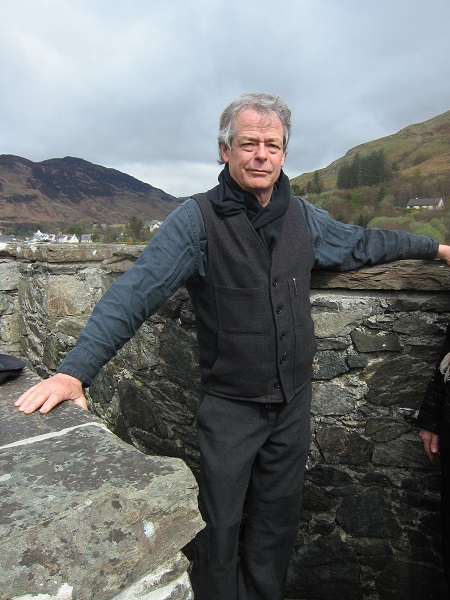 In the “narrative concert,” actor Thomas Clyde Mitchell reads the writings of John Muir, which are woven into the musical score. (Photo: George Eggers)

PALMER: John Muir was a child of Scotland, and in this narrative concert, composer Ed Willet uses the conservationist’s own words to tell his story.

WILLETT: The writings of Muir are performed by an actor who’s part of our troupe. We decided to do it in a chronological setting; we start off in his early days in Scotland.

MITCHELL: “After I was five or six years old, living in Dunbar, Scotland, I ran away to the seashore or fields every Saturday. Oh, the blessed enchantment of those Saturday runaways in the prime of spring. Those were my first excursions; the beginnings of lifelong wanderings.”

PALMER: Actor Tom Mitchell plays Muir and doubles on percussion, along with Liesel Wilson on violin, Cheryl Leah who sings and writes some of the lyrics, and Willett on the cello. After John Muir’s early days wandering the Scottish moors, the action and the family move to Wisconsin, when they emigrate.

MITCHELL: “America! We settled in the Wisconsin wilderness a few miles from Portage in a sunny woods overlooking a pond which Father named Fountain Lake. Father put me to the plow at the age of 12, when my head reached but little above the handles. For many years I had to do the greater part of the plowing.” 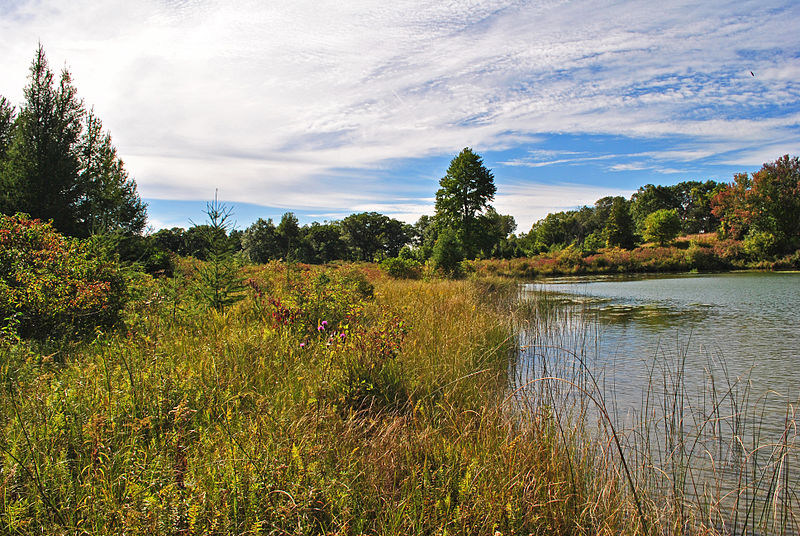 PALMER: But the back-breaking work on the farm wasn’t enough to keep young John Muir down — from his earliest days he was also a tinkerer, who liked to know how things worked, and tried to invent something better.

WILLETT: They were inventions like clocks, and one alarm clock that was rigged up to a device that would raise the top half of his bed, so it kind of threw him out of bed, if you could imagine that. He’d always had that kind of a mind. It started very young for him; in fact, he would get into a great deal of trouble with his father when he was eight years old because he was working on his inventions all the time, and that wasn’t something that his father thought was a good use of his time. So he finally got his father to agree to let him start his day whenever he wanted. So instead of getting up at five o’clock to start working, he would get up at two o’clock in the morning, one o’clock in the morning, and go down in the cold basement and work on these inventions. 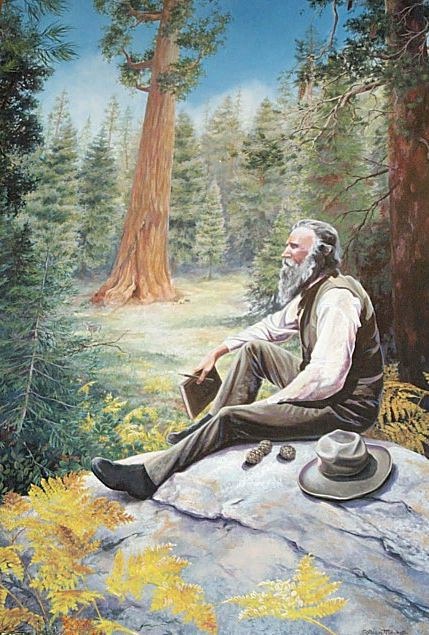 John Muir’s legacy includes the designation of Yosemite as a National Park, the founding of the Sierra Club, and the introduction of Americans to their public lands. A prolific writer, Muir produced numerous articles and several books that conveyed the wilderness of the American West to distant readers. (Painting by Colleen Mitchell-Veyna, used with permission)

PALMER: This creativity paid off for Muir; it was the door to formal education — though, as he writes in his autobiography “The Story of My Boyhood and Youth,” which is the source of the words Willet sets, formal education wasn’t enough.

MITCHELL: “I was told by neighbors I should take my inventions to the state fair in Madison. There it was considered wonderful that a boy on a farm had been able to invent and make such things. These inventions opened all doors to me, including Wisconsin University, where I studied for four years before wandering off on a glorious botanical and geological excursion, leaving one university for another, the University of the Wilderness!”

PALMER: “John Muir — University of the Wilderness” is the title of this work, and Muir’s upbringing prepared him for that education, says Willett.

WILLETT: His father was a task-master and disciplinarian, and apparently Muir regularly saw the other end of a belt for little provocation. It was so rough, but it seemed like it possibly had a lot to do with why he ended up seeking a sanctuary in nature, and why he was able to be so resilient to being in the mountains for three weeks and all the things he did — walk a thousand miles, as he did in the United States. 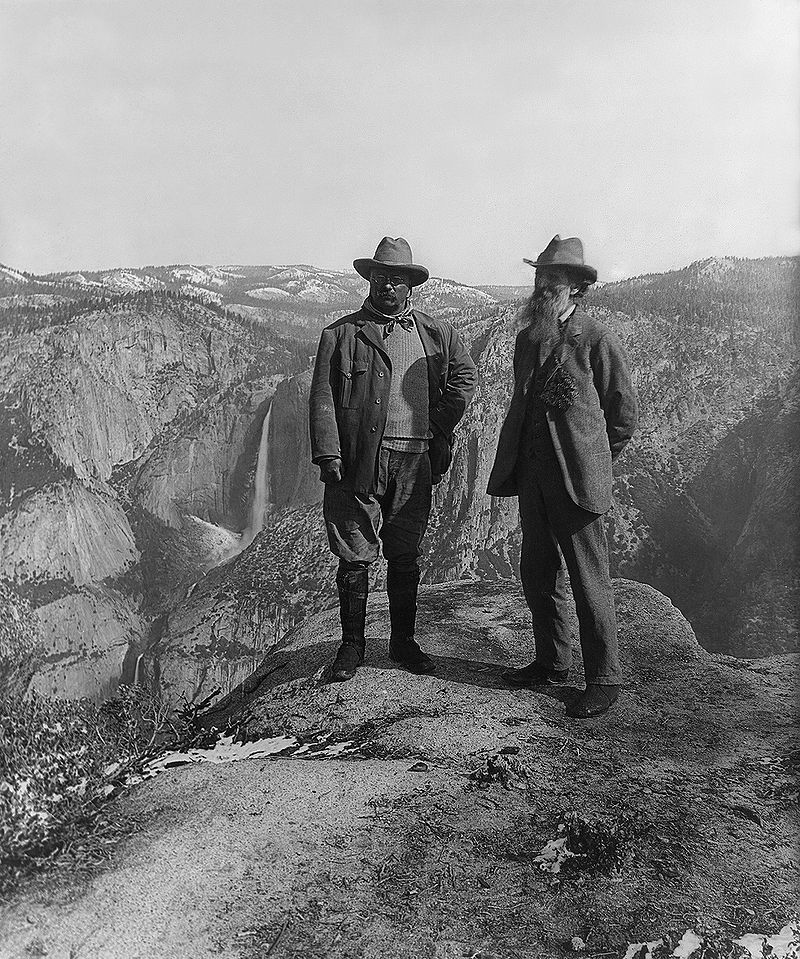 When President Theodore Roosevelt visited Yosemite National Park in 1903, it was John Muir who showed him the park and lobbied for additional protections for Yosemite. Thanks in part to Muir’s persuasion, President Roosevelt protected approximately 230 million acres of public lands during his presidency. (Photo: Mfield, Wikimedia Commons public domain)

MITCHELL: “I began by walking to the Gulf of Mexico, a thousand miles, more or less, then decided to visit California and see its famous Yosemite Valley. As I arrived on the steamer in San Francisco, a man on the wharf asked where I was bound. ‘Anywhere that is wild!’ I set out again afoot, and soon came to the great Central Valley, like a flowered lake of pure sunshine. From its eastern boundary rose the mighty Sierra, so radiant it seemed not clothed in light but wholly composed of it. I was a new creature, born again, and truly until this time was I fairly conscious that I was born at all!”

PALMER: That experience in California was a revelation for Muir. He’d been observing the natural world and meticulously noting its every detail since his childhood in Wisconsin.

MITCHELL: “Our beautiful lake, named Fountain Lake by Father but Muir’s Lake by the neighbors, is one of the many small glacier lakes that adorn the Wisconsin landscapes. It is fed by 20 or 30 meadow springs, about a half mile long, half as wide, and surrounded by low, finely-modeled hills dotted with oak and hickory, and meadows full of grasses and sedges and many beautiful orchids and ferns.” 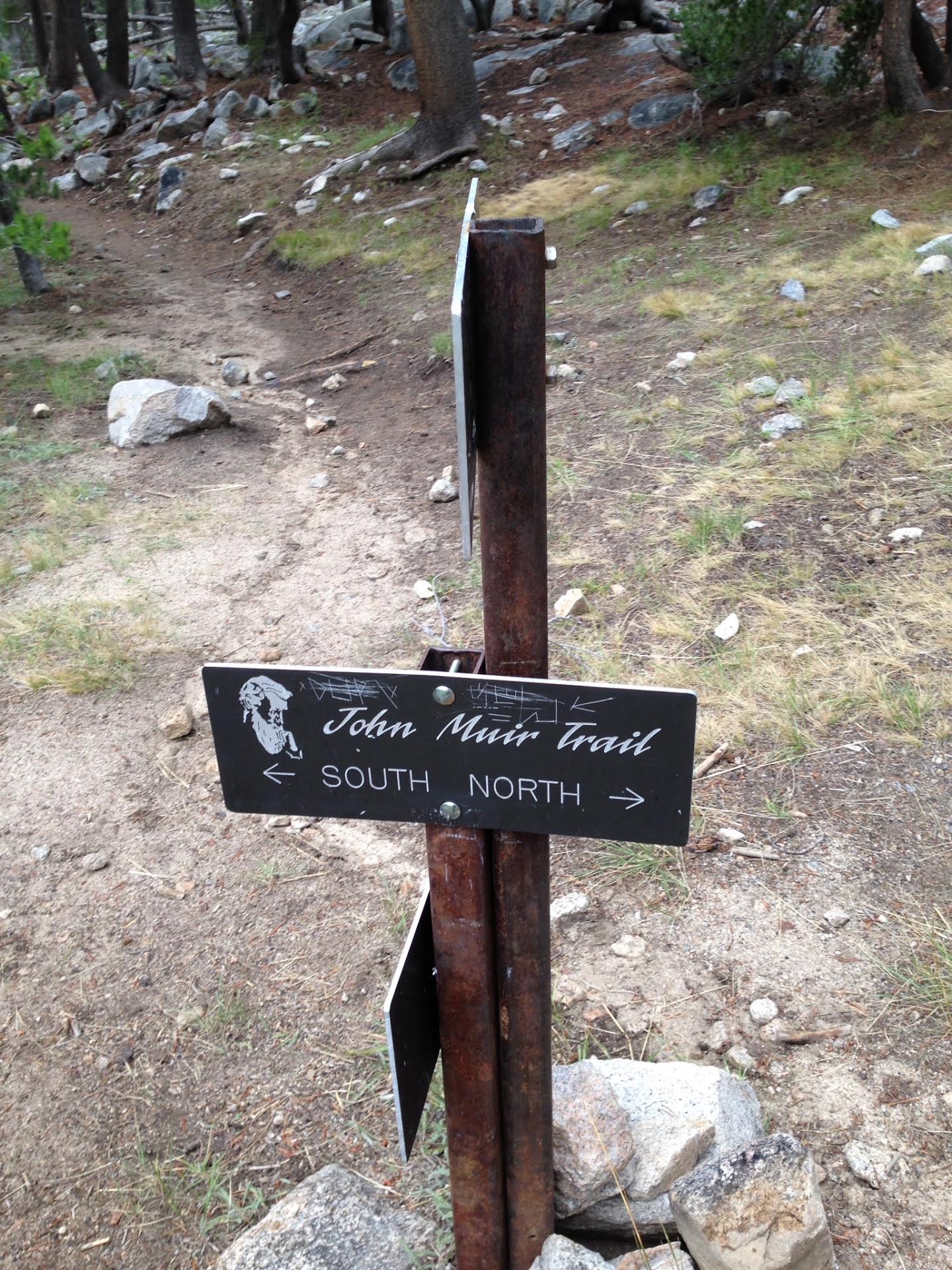 The John Muir Trail, or JMT, travels 211 miles through the High Sierra, Muir’s stomping ground. The trail begins in Yosemite Valley and ends at the summit of Mt. Whitney, the highest point in the Lower 48. (Photo: Jenni Doering)

PALMER: Ed Willett grew up near the Muir homestead in Wisconsin. He says he and Cheryl Leah combed through dozens of Muir’s books and articles to find just the right inspiration for their original music and lyrics.

WILLETT: We decided that we wanted to have our program be more of a philosophical landscape than a historical one. Most of it is sort of trying to get into his emotion again, trying to get an insight into what makes a person be so passionate and be such an inspirer of others.

PALMER: His writings inspired Willett and Leah to write Roses in the Hollow, a picture of Muir immersed in the profusion of life and its early summer flowers.

WILLETT: Roses in the Hollow is one of the middle movements. The roses are an archetype and it’s a picture of life that we see often in the springtime and in the early summer. I tried to put into the music the myriad of directions that life is going at the same time.

PALMER: But this musical piece doesn’t just show Muir reveling in the lushness and bounty of summer, it captures his other qualities as well. 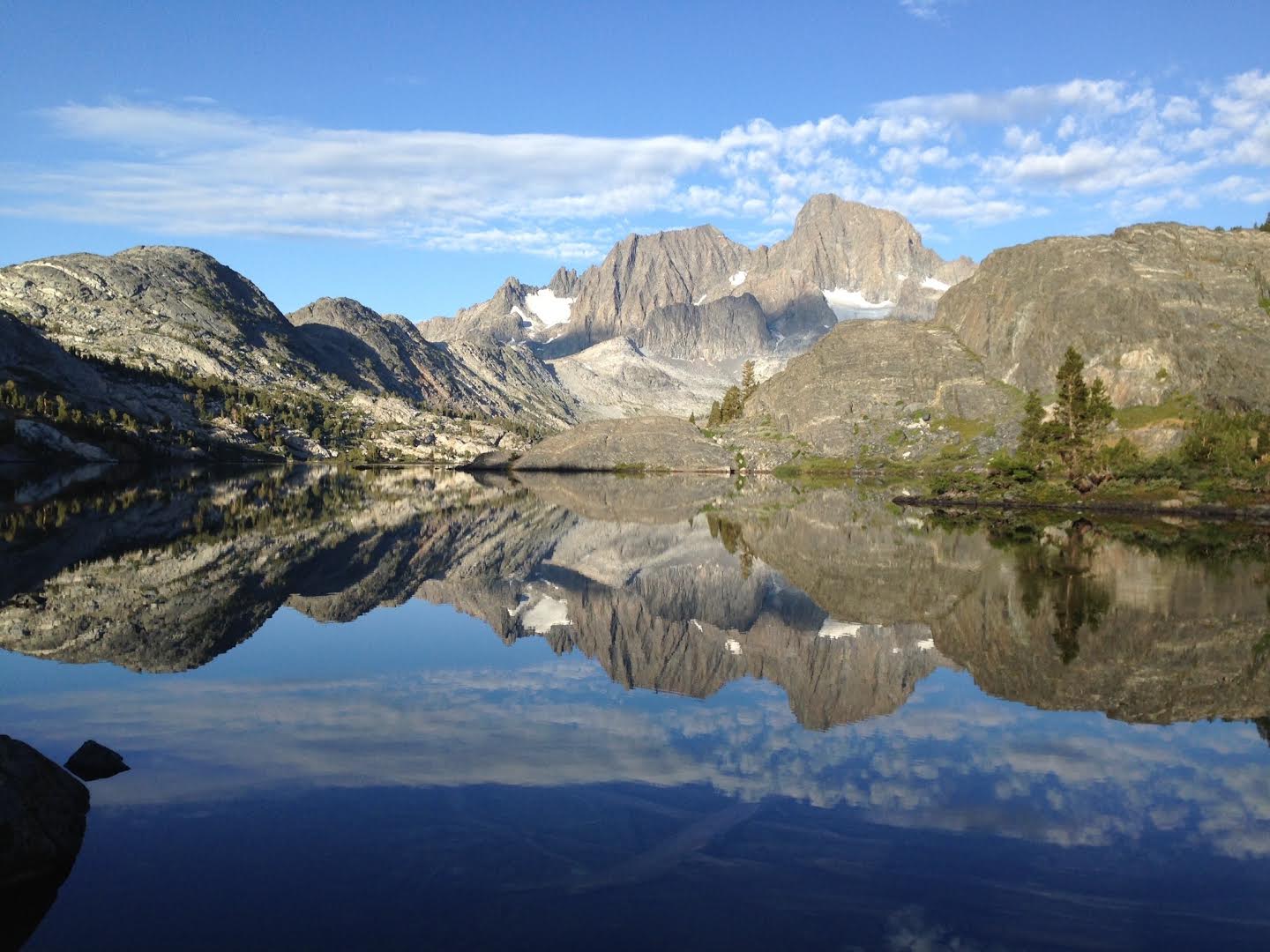 WILLETT: One of the things that fascinates me about him is his adventurer spirit. We think about him writing at a writer’s desk often, because that’s what we see of him, but he was an amazing risk-taker. He was a mountaineer, and in fact there’s a piece based on the writings that he wrote about an experience on Mount Shasta in the western United States, where he was trapped on a mountain overnight and near death, and ended up staying warm enough on some hot fumaroles, they’re called, hissing fumaroles, the warm air that comes up from volcanic depths. And so, he and his partner spent the whole night trying to survive this storm and they barely did. And at the end of that adventure we have a piece, actually, that’s sort of his homecoming. When he gets to the end of that adventure and they are stumbling down the mountain and they get back to camp, this piece called “Night Step Softly” comes in. And to me, it just represents the relief that someone gets when they’ve done something amazing and just cheated death again, and then they get to sleep. 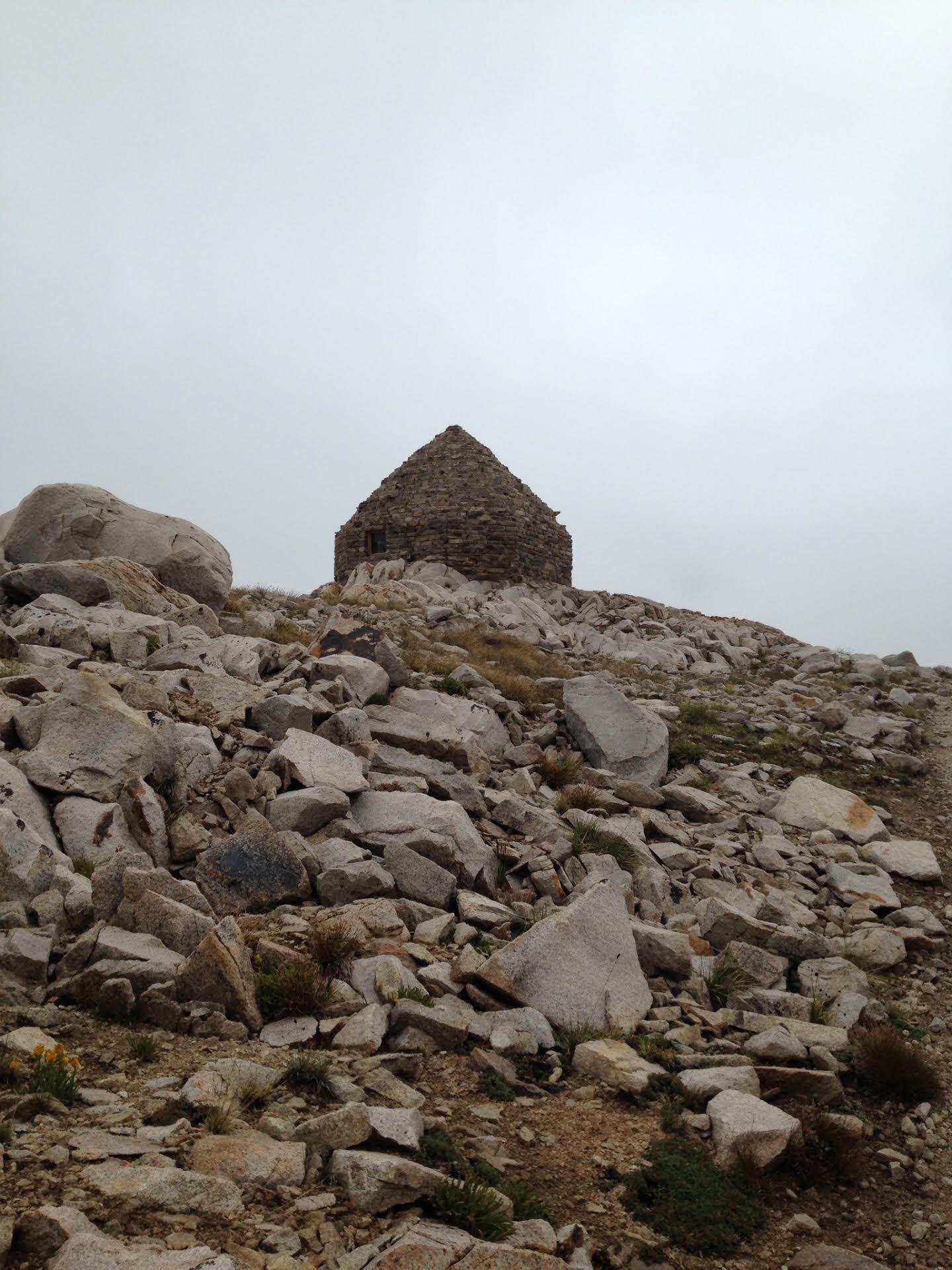 Muir Pass, a forbidding, high-altitude mountain pass backpackers must climb on the JMT, is the site of the John Muir Memorial Shelter, built in 1930 by the Sierra Club. The sturdy stone hut functions as an emergency shelter for hikers caught in stormy weather. (Photo: Jenni Doering)

PALMER: You obviously have a tremendous fondness for Muir as a character, as an icon.

WILLETT: Yeah I do, I guess it’s pretty deep with me because just the other day I dug up some writings of my own father, who was a naturalist and patterned a lot of his life after Muir, who was an environmentalist. The parallels between my father’s writing and Muir’s were just arresting. I hadn’t really noticed it quite as much, but I was digging through some old writings of his. So I think it goes right from the ground up for me, for sure.

PALMER: And the music in “John Muir — University of the Wilderness” is not just about the man, but also the writing that speaks so directly and intensely, and the life dedicated to keeping wild and beautiful places pristine and protected for everybody. For Living on Earth, I'm Helen Palmer.

[MUSIC FROM “JOHN MUIR — UNIVERSITY OF THE WILDERNESS” BY CHANCE]


The narrative concert, “John Muir -- University of the Wilderness”