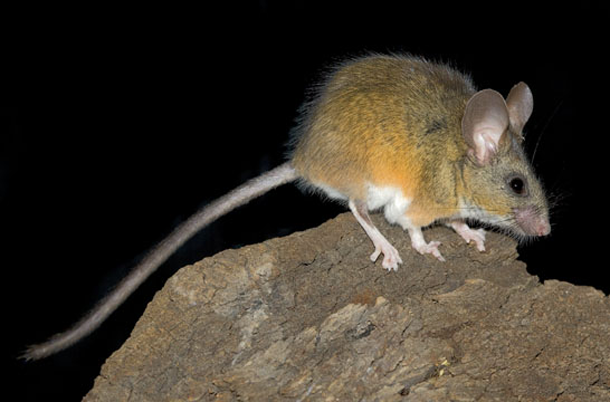 The California mouse was perfect animal model for this research because the species is monogamous and biparental. (Photo: Wikimedia, CC BY-SA 3.0)

Humans today live in a sea of chemicals, and we are just beginning to understand how they affect our health. The endocrine-disrupting chemical Bisphenol-A has been linked to cancer, but new research from the University of Missouri found that the common substance seems to impair parenting behavior in mice. Scientist Cheryl Rosenfeld discusses the finding and its implications with host Steve Curwood.

CURWOOD: Well, though it’s banned in the US, DDT persists in the environment, and it’s a pesticide that, as well as being linked to cancer, disrupts hormones. It’s another of the thousands of chemicals ubiquitous in our modern world that affect our bodies in ways we are only beginning to understand, including brain development and behavior. One chemical that’s gotten a lot of attention recently is Bisphenol A or BPA, and a new mouse study suggests that the chemical could have adverse impacts on parenting behavior. Joining us now to discuss the study is Cheryl Rosenfeld, a Biomedical Sciences Professor at the College of Veterinary Medicine at the University of Missouri. Welcome to Living on Earth, Cheryl.

ROSENFELD: Thank you very much.

CURWOOD: So, first of all, remind us, what is BPA and where is it found?

ROSENFELD: Well, Bisphenol A is considered an endocrine disrupting chemical, and it's found essentially everywhere, because it’s in our everyday items. It's in our plastics, in our cardboards, it's even used in dental sealants. And the problem with Bisphenol A is it does not degrade in the environment, so it actually can bioaccumulate. They've done several studies looking at whether we can find it in the water and in terrestrial sources, and in almost all aquatic sources tested today there's been measurable amounts of Bisphenol A. 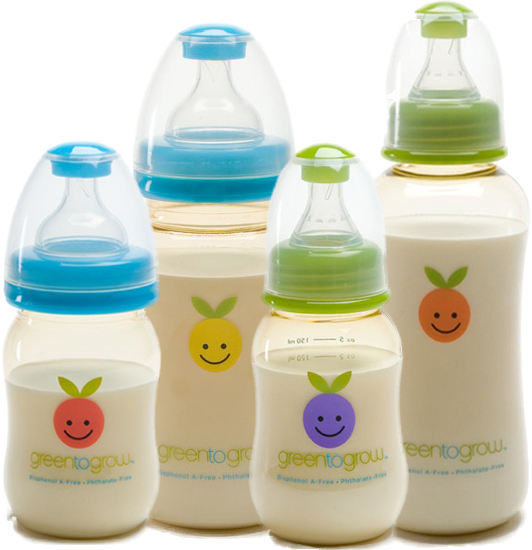 Concerns about BPA have prompted companies to take the chemical out of many common baby products. (Photo: Alicia Voorhies, Flickr CC BY-ND 2.0)

CURWOOD: What are the health effects that have been demonstrated?

ROSENFELD: The health effects are many. These include cancers, reproductive deficiencies in males and females, neural behavior deficits, immunological problems, to list just a few.

CURWOOD: So, as I understand it you wanted to look at the impact of Bisphenol A, BPA, on parenting behaviors, and you did a study using mice. Why did you use the California mouse?

ROSENFELD: So we decided to use the California mice for these studies because unlike regular laboratory mice and rodents, they exhibit monogamy and they're biparental. In the past studies they've only looked at maternal behaviors because they could not assess paternal effects, because in laboratory mice and rats, the dad does not play any parental investment.

CURWOOD: But in the California mouse, dad cares.

ROSENFELD: That's correct. Dad does care, and he has to care very much because the survival of his offspring are dependent upon basically receiving parental care from both mom and dad.

CURWOOD: So, tell me about your study. What exactly did you do?

CURWOOD: So what did you find? How did Bisphenol A affect the parenting behavior in these mice?

ROSENFELD: Well, similar to other studies with laboratory mice and rats, we found that developmental exposure to Bisphenol A reduced the maternal investments — time spent nursing, time spent in the nest, decreased if she was exposed to BPA. Likewise, and this is what is novel, we found that the dads who were also exposed to Bisphenol A spent less time in the nest with his pups. But what was really intriguing to us is if both parents were developmentally exposed to BPA, we had heightened effects. Essentially they both reduced their parental investment. We also found that control females who were paired with males who had been exposed to BPA reduced their parental investment, as assessed by time spent nursing and in the nest with the pups. And that was quite surprising to us, because she herself was a control, so she obviously could engage in normal parental behaviors, but it was almost as if she could sense the compromised state of her partner and she was going to reduce her parental investment in his offspring.

CURWOOD: So it's kind like in the human family, if dad is off drinking heavily and blowing all the money, mom says, “Not much I can do.”

ROSENFELD: That's kind of like a defeatist kind of attitude perhaps, but the thing too in rodents, you have to think about is they obviously want to save some of that energy back for the next litter. So she might say, “well, look, he's not the best partner, and what if I can get a better partner? I want to invest in those offspring. So I'm going to save some of my energy resources for subsequent generations.”

CURWOOD: Well, wait, I thought they were monogamous?

ROSENFELD: They are, but if the partner dies in the wild, then they will pair up again with another male or female.

CURWOOD: So if they die or if they're a deadbeat apparently.

ROSENFELD: [LAUGHS] Maybe so. We haven't tested that hypothesis yet.

CURWOOD: So stepping back for a moment, Cheryl, what surprises you the most about your results?

ROSENFELD: Well, I think, essentially, the fact that paternal behaviors, just like maternal behaviors, are vulnerable to endocrine disrupting chemicals. This is what's unique because nobody has looked at how extrinsic factors like endocrine disruptors, paternal diet, stress, could affect his parental investment. And we need to start thinking about how those findings might relate to humans, because there's not been a single study to date that has looked at how Bisphenol A, or any EDC exposure, can affect parenting behavior in humans. And I think to me the long-standing consequences of having reduced parental care are incredibly important.

CURWOOD: Now, parenting behavior for humans seems like something that has to do a lot with culture and socioeconomics. How relevant do you think your findings are for humans?

ROSENFELD: So, you're correct, social and economic issues all play important roles in parenting, but if it comes down to it, it's actually guided a lot by what is called neuropeptide hormones in the brain. So let's say when the woman gives birth, she has a surge of what we call oxytocin. That lets the milk down in the breast and then the infant can feed. But it also, too, it really solidifies the maternal-infant bond. And it is now clear that even dads who just had their son or the daughter born, they also get a surge of oxytocin. And the same thing happens in our animal models. These parenting behaviors that we've been measuring are guided by hormones like oxytocin.

ROSENFELD: That's our hypothesis. That's what we’ve been looking into, in terms of how these chemicals can be affecting these hormones like oxytocin and related ones.

CURWOOD: BPA’s been removed from a number of products, but you note that it accumulates in the environment. So I'm wondering, to what extent do we continue to be exposed to BPA, even if we don't use BPA-containing products? 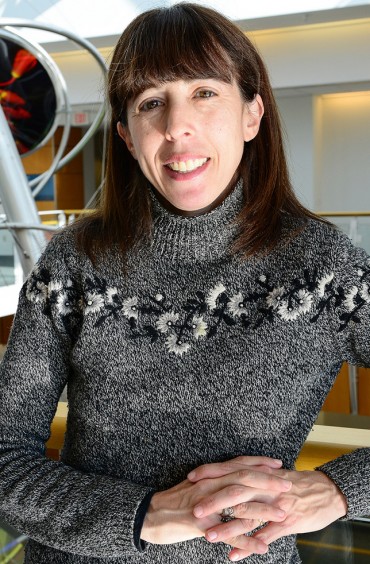 ROSENFELD: Because it is in the environment, and it cannot degrade easily, our exposure is almost guaranteed. But that still does not mean that we should not reduce our exposure at this point. The FDA has banned it from the baby products. That's one possible mechanism by which many infants can be exposed to it; however, it still does not address the two primary routes of exposure, and that is the environment and the pregnant mother. So that pregnant mother is being exposed Bisphenol A while she's carrying her offspring, and that's probably the most critical period for a lot of the organ systems, including the brain.

CURWOOD: And Bisphenol A is just one out of many, many, many chemicals that have endocrine disrupting.

ROSENFELD: That's correct, and so I think we need to look at other ones, including heavy metals, air pollutants, nanoparticles — that's become very prevalent now in our environment as well — and decide if they affect maternal and paternal behaviors.

CURWOOD: Dr. Cheryl Rosenfeld is a Professor of Biomedical Sciences at the College of Veterinary Medicine at the University of Missouri. Thanks so much for taking the time with us today, Professor.

ROSENFELD: Thank you very much.


Read the study in PLOS ONE